Undefeated lightweight sensation, Devin "The Dream" Haney (22-0, 14 KOs), has been preparing for his upcoming WBC world title eliminator bout with Zaur Abdullaev (11-0, 7 KOs) at Victor Conte's SNAC training facility in the Bay Area. The fight is being promoted by Matchroom Boxing on DAZN and will take place at Madison Square Garden's Hulu Theater on September 13, 2019.

The winner of Devin's upcoming fight will likely fight the winner of the Vasyl Lomachenko (13-1, 10 KOs) vs. Luke Campbell (20-2, 16 KOs) fight on August 31, 2019. Lomachenko currently holds both the WBO and WBC lightweight world titles.

“Track Coach, Remi Korchemny, at SNAC is the truth, he always brings the best out of me,” said Devin Haney. “He’s strict, he’s straight to the point, he don’t care who you are, how much money you make, anything you’ve ever accomplished. All that goes down the drain when you’re training with him. This is going to make fight night that much easier. I’m the hardest worker in the game and you can’t stop me.”

Devin's father, Bill Haney, is his head boxing trainer and has done a terrific job of guiding Devin's undefeated boxing career from a very young age. Devin also has an excellent team of coaches and trainers who support him like a family, both in and out of the gym.

SNAC Head Trainer, Mike Bazzel, oversees all of the futuristic hypoxic-hyperoxic training protocols that Devin routinely does at the high-tech facility.

“Devin sets the standard,” Conte continues. “He’s the next generation and he’s still only 20 years old… Devin’s a stud. He’s the new guy that is taking over. He’s the new king, he’s the future of boxing.” 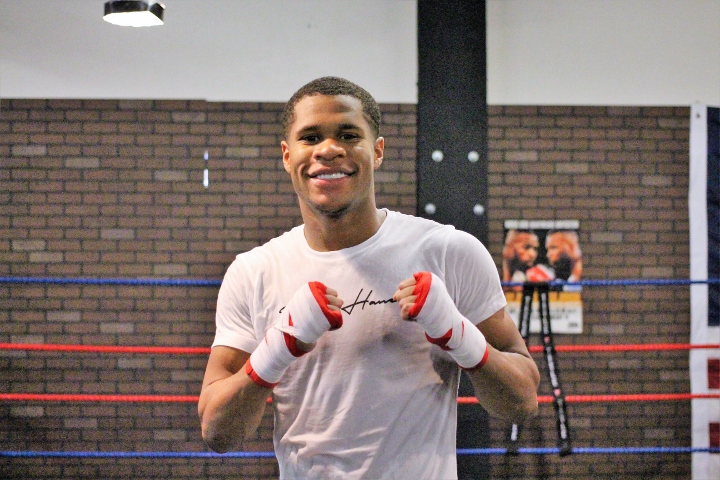 Meliboev will be trained in the pro ranks by Ravshan Khodjaev, one of the National Uzbekistan Team's head trainers, and co-promoted by DiBella Entertainment and Fight Promotions Inc.

"I'm thrilled to add an outstanding amateur like Fazliddin Meliboev to the DiBella Entertainment roster," said Lou DiBella, President of DiBella Entertainment. "At only 22 years old, Faz has a bright future and, together with Fight Promotions Inc., we will work hard to provide him every opportunity to achieve his goals. Fans in attendance at Foxwoods Resort Casino for next week's stacked Broadway Boxing card and those watching the UFC Fight Pass stream will get to see an exciting amateur star as he begins on his path toward a world title."

"I'm thrilled to work with DiBella Entertainment on the start of my professional career. I know that they can provide me with the opportunities to reach my goal of becoming a world champion," said Meliboev. "Thursday night is very important to me and I'm very excited to make my pro debut in the United States and show the fans my skills."

Fighting in Uzbekistan, Meliboev was a 2015 National Champion in the country's acclaimed amateur program. The southpaw also won silver medals at the 2017 Great Silk Way Tournament in Baku, Azerbaijan, and the 2016 Chinggis Khan Cup, which took place in Ulaanbaatar, Mongolia. Additionally, he also secured the bronze medal at the famed 2014 Asian Youth Boxing Championships in Bangkok, Thailand. Fighting in the World Series of Boxing, Meliboev won all three of his bouts.

Headlining the Broadway Boxing event on August 29, featherweight contenders Toka Kahn "T Nice" Clary (26-2, 18 KOs), a native of Liberia, now fighting out of Providence, RI, and Irvin Gonzalez (12-1, 9 KOs), of Worcester, MA, will collide in a 10-round contest.

THE LONG RUNNING quest of Lucien Reid to become involved in title fights certainly rings true with the old saying about London buses.

Reid has been waiting, impatiently, for a title opportunity to come along then all of a sudden, like the buses, two have arrived at once.

'Lethal' Lucien, 25, will challenge for the British and Commonwealth super bantamweight titles held by Brad Foster when the pair meet at York Hall on September 14, live on BT Sport.

It is just reward for the 8-0-1 former amateur standout who has recently changed his training location from the base of Adam Booth in Redhill to Alan Smith's thriving gym in Bromley.

After being kept waiting at the shelter for a lengthy period, Reid almost reached the point of believing his boxing bus would not ultimately arrive.

"I did, I've been calling for a title fight for years because, not being funny, with my amateur background I have done everything, boxed all different styles and I know what I am capable of," explained the Hackney-born Reid, who made his professional debut in May 2015.

"To be honest, boxing journeyman-type opponents left me not getting up for it and that is why in my last fight (against the 9-1 Indi Sangha) I was happy to be up against someone with a good record.

"I want titles as I have a boy, who is six now, and he doesn't care about me winning fights, he just wants me to have belts. I now just want to be one of those dads who can show off to him."

Reid, who has previously been nominated for Southern Area and English honours that have not come to fruition, accepts he is probably not everybody's ideal choice for when it comes to putting titles on the line.

"I think I have been too much of a risk for a champion to fight me with not much of a reward. Especially if they are not with Frank Warren. Why would they take a fight knowing they are going to lose?" added Reid, who suffered the only blemish to his record last time out against Sangha when the fight was stopped in the third round due to him sustaining a nasty cut above his right eye.

However, the fact that a double-title encounter comes next shows that no long-term harm was done to his prospects.

"It was annoying and, at the time, I was devastated, obviously. I was into my flow and feeling good, but now it looks like a blessing in disguise because look what has come from it.

"I'm hoping Brad Foster looked at that fight and thought 'this will be easy'. That wasn't how I box normally and everything is changing."