Two-time Olympic gold medalist Claressa Shields not only is spearheading a new wave in women's boxing, she has developed into a true role model for countless youths.

Shields will be inducted into the USA Boxing Alumni Association Hall of Fame this Friday night in Salt Lake City, along with Class of 2018 members Roy Jones Jr. and, Andre Ward, as well as the late Emanuel Stewart and Tom Cleary.

"I feel honored," Shields spoke about being inducted into the USA Boxing Alumni Association Hall of Fame," I am only 23 years old and to be inducted into the USA Boxing Hall of Fame is a great honor, but also a shock to me. I believe I am worthy of any honor, but I know things take time, and I always thought I would put in the Hall of Fame at the age 40 or 50. This is a big deal to me and I feel so honored. Just to have my name mentioned alongside names of greats like Andre Ward and Roy Jones just really motivates me. I feel privileged!"

The pride of Flint, Michigan, Shields has already successfully parlayed her amateur success to the professional ranks, in which she is 7-0 (2), and the reigning unified (IBF, WBA & WBC) world middleweight champion.

Shields finished her amateur career with an incredible 77-1 (18 KOs) record, highlighted by her Olympic gold-medal-performances in 2012 and 2016. She hasn't lost in the ring since 2012, when Savannah Marshall (England) won on points, 14-8, at the World Championships in China.

"USA Boxing came into my life as a two-time Junior Olympic champion," Claressa explained her USA Boxing relationship. "The help from USA Boxing was so important: just noticing me as a young athlete and knowing I would be a strong young woman to represent the USA in the future; meeting Julie Goldsticker, who was a blessing for me as she helped me with a lot as a teenager, and just having Coach Abdullah, coach Al Mitchell, and coach Gloria Peek teach me different styles and how to use all my attributes. USA Boxing blessed me with a lot of knowledge and life-long friendships with all my Olympic teammates and Olympic coaches. My favorite coach, Kay Koroma, literally was with me the whole way through 2015-2016, helping me outside the ring with advice and inside the ring."

Shields is one of the driving forces in women's boxing today, carrying the torch handed off by American female boxing pioneers such as Christy Martin, Laila Ali and a few others.

"There is great change going on right now -- me, Mikaela Mayer, Franchon Crews, Katie Taylor, Amanda Serrano and a few other women are carrying the torch for women's boxing right now," Shields explained. "Progress has been fast, every network has had a women's fight on television this year, especially Showtime, on which I have boxed the main event four times. Women's boxing can go far. I believe the day will come when we can be paid millions just like men."

By opening doors and breaking down obstacles, Claressa has become a true role model for youngsters all over, in and out of boxing.

"It feels good to be a role model for them (females), and also for so many male boxers," Shields noted. "Boxing is in a different era and I just want to make it easier for girls coming up, so when they turn pro, boxing will be closer to equality."

"Claressa has one of the greatest stories in the history of amateur boxing," said Chris Cugliari, USA Boxing Alumni Association Executive Director. "Her drive, commitment, talent, and character made her a USA Boxing and Olympic champion, leaving a legacy that will last for a very long time.  She is a trailblazer for women's boxing and has established her place as one of the most influential USA Boxing Alumni members of all time.  The USA Boxing Alumni Association wants to thank her for inspiring the amateur boxing community and serving as a great role model for the next generation of champions."

“I’m happy I got the win and was able to get in some good rounds of work,” said a triumphant Salamov, post-fight. “I am excited about the new year and the possibilities it will bring.”

Salamov’s promoter, Dmitriy Salita, says the great 2018 his Russian fighter enjoyed was just a preview of 2019.

“This was Umar’s third fight in six months and he was in superb condition,” he said. “I’m happy he got the win and had a chance to go the rounds. Next year will bring exciting possibilities for Umar in the talent-packed light heavyweight division.” 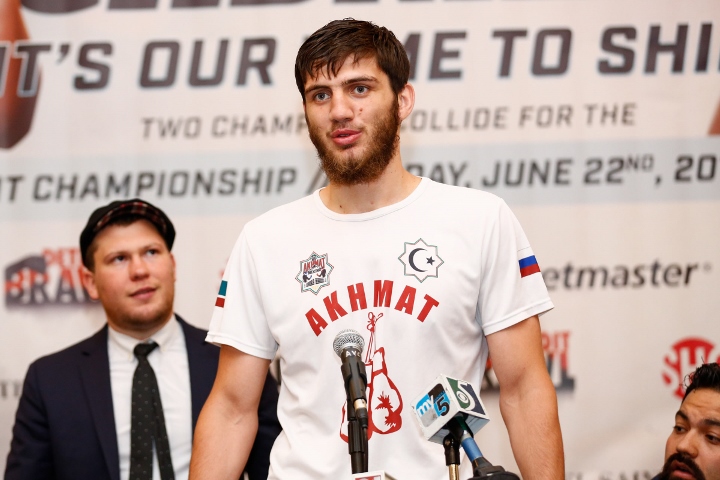 This past Saturday night, Tori Nelson pounded out a 10-round unanimous decision over Sanna Turnunen to retain the UBF Middleweight title in the main event of the first ever fight card at The Entertainment and Sports Arena in Washington, D.C.

The eight-bout card was promoted by Tricky Entertainment and DCFightNight.

Nelson controlled the action against Turunen by out working her. Turunen was gritty in defeat, but Nelson took the fight in shutout fashion to the tune of 100-90 on all cards.

Sam Crossed was fortunate to gain a split decision over Twon Smith in a cruiserweight bout.

At the end of round two, Smith dropped Crossed with a hard right hand. Crossed came back to land some solid shots, but was rocked again in round four. The fight was a close fight, but some in the crowd showed their disapproval when the scores were read 57-56 twice for Crossed and 57-56 for Smith.

Jordan White stopped Ndira Spearman in round one of their scheduled four-round featherweight bout.

White landed a body punch that was followed by a left to the shoulder area, and Spearman went down for the count at 2:02.

In a surprising result, Matt Murphy and undefeated Antonio Magruder battled to an entertaining draw in a welterweight bout.

Murphy rocked Magruder several times in round's two and three, but Magruder came back to salvage the draw with a strong 4th frame.

In round two, Irving dropped Sheppard with a long right hand. Sheppard staggered to his feet, but the fight was called off at 1:06.

In round three, Harris dropped Lewis with a hard combination. Harris finished Lewis off by rocking him several more times, and the bout was stopped at 2:00.

Tricky Entertainment has been promoting music, entertainment and lifestyle events in D.C. for the past ten years, and is run by Erwin Pendergrast.

DCFightNight is run by Sean Magruder, and this will be his second boxing show in DC.

The Matchmaker was Chris Middendorf.