Ruiz, from Los Angeles by way of Mexico, predicted an early round stoppage in his pre-fight media interviews.

"I can see Flores coming out aggressive," said the 22-year-old Ruiz. "I'll use that against him and try to knock him out in the third or fourth round. He's never faced anyone like me before. I'm like a monster in the ring."

Tickets for "Path to Glory" are priced at $40 and $60 and are available for purchase on the day of the event starting at 5:30 p.m. PT from the will call booth at the Doubletree Ontario. 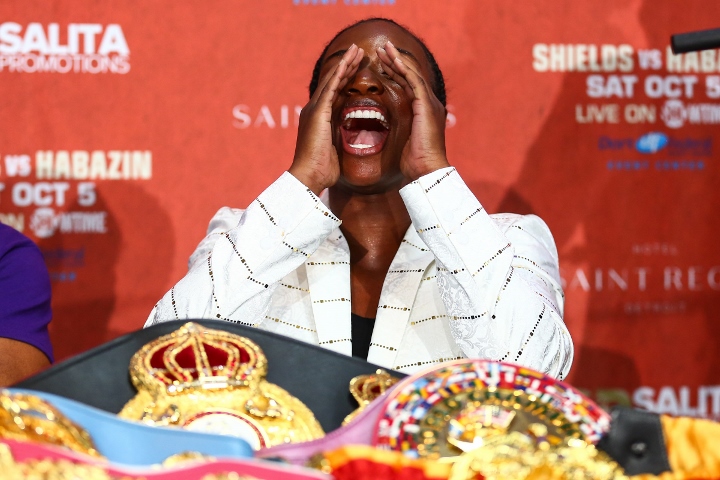 Salita Promotions wishes to congratulate undefeated two-division world champion Claressa Shields for being named the 2019 Individual Sportswoman of the Year by the Women’s Sports Foundation at their 40th Annual Salute to Women in Sports event hosted Wednesday evening.

Considered the biggest night in women's sports and held at Cipriani Wall Street in New York City, the Salute to Women in Sports Awards honors the power of game-changing athletes and inspirational leaders in sports and life, who all collectively serve as role models to young girls and future generations.

The 24-year-old Shields is a two-time Olympic Gold Medalist and the current undisputed middleweight champion of the world, as well as a tireless advocate and ambassador for her hometown of Flint, Michigan.

“My sincerest congratulations to Claressa for collecting yet another well-deserved award,” said Salita Promotions president Dmitriy Salita. “Claressa’s story is a testament to hard work and dedication overcoming any obstacle. She is a superstar athlete and role model for women and girls worldwide. I am proud that she has allowed me to be part of her history-making career. This award is not only special for Claressa, but for the sport of boxing as a whole.”

The Women's Sports Foundation was founded by women’s tennis great Billie Jean King and exists to unlock the possibilities in every girl and woman through the power of sport, champion the causes of women's sports and advocate and recognize programs and people that are working to provide women and girls equal access to all sports.

This Friday night, undefeated lightweight Golden Garcia will be in action when he takes on Hector Garcia in a six-round bout at The Doubletree on Ontario, California.

Golden Garcia has a record of 11-0-1 with six knockouts, and he will be making his American debut.

"Camp went great.  I was finally able to train twice a day for a full camp.  This was the best camp that I have had," said Golden Garcia.

"I am excited to get back in there, and do what I do best."

Despite not knowing much about his opponent, Golden Garcia is very confident in Friday night's outcome.

"I have not seen much on him.  I just met him in the hotel, but I am ready for whatever he brings.  I think this is a huge opportunity for me, and I am ready to show everybody what I can do.  This fight will lead to bigger and better fights.  I just want everybody to know that I am back, so don't blink and anything can happen."

The Fight will be streamed live on our Facebook page, Beto Duran will handle blow-by-blow duties, while Doug Fischer provides expert, color commentary.

Garcia is a five-year veteran of the professional ranks and is promoted by Banner Promotions.

Golden is co-managed and co-trained by Otis and Howard Grant.

Absolute joke this piece of crap has been entertained by this award commission after last week , just shows you how far society has gone backwards , people can also fail drug tests and still Be accepted in the sporting…

Nothing like the mention of Shields to bring forth the keyboard firing squad! lol.

[QUOTE=Realdeal123;20131005]Shield should be shamed for thid award, her family member sucker punched 70 yrs old elder, n now in custody[/QUOTE] He was out on parole for other assaults and is looking at 10 years. What a DUMB @SS!!! And his…

[QUOTE=Shadoww702;20131183]Insults??? She was "PROUD" of her Unc! and posted she Habazin was only using that as an EXCUSE and she should just get another trainer. And slurs??? The older man is BLACK!! And WELL known in the boxing community. He…

[QUOTE=ShoulderRoll;20130970]Claressa didn't attack or sucker punch anybody. Unless you can prove otherwise you should tone it down with the slurs and insults.[/QUOTE] Insults??? She was "PROUD" of her Unc! and posted she Habazin was only using that as an EXCUSE…