JB German Sports won the purse bids today in Rome for the right to promote the fight for the EBU super middleweight title between official challenger Juergen Braehmer (51-3) and the reigning champion Stefan Haertel (18-1). T

The winning bid was a solid 103,000 Euro while Haertel´s promoter SES bid 61,500 Euro. The fight will go ahead in October in Rostock or Schwerin.

Braehmer is active as a fighter and trainer.

As a matchup well, Braehmer is a tricky skillful southpaw, has fought at a different level than Haertel a former Olympian, and has done so for decades by now but at 40 years old the it remains to be seen how much there is left. Haertel´s big weakness is his lack of punch - other than that he´s a good fighter. 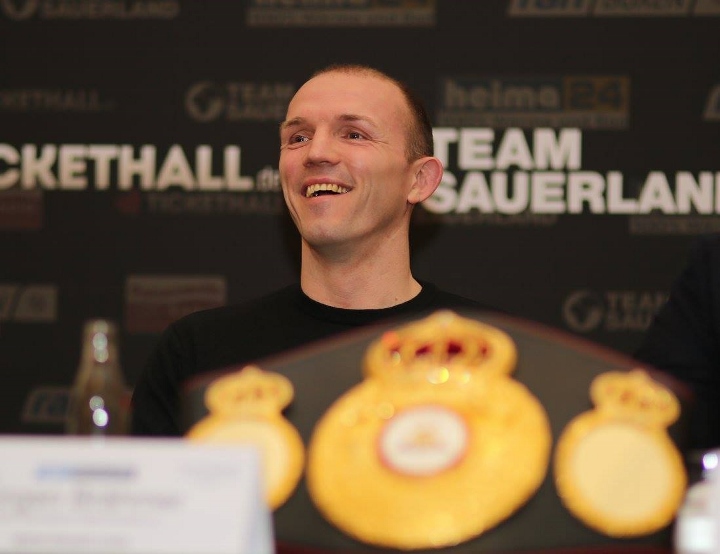 Ringstar Promotions of France won the purse bids today in Rome for the right to promote the fight between EBU super welterweight champ Sergio Garcia (30-0) and official challenger Cedric Vitu (47-3).

Ringstar bid exactly 100,000 Euro while Maravilla Box came in second with a bid for 92 085 Euro. Garcia vs Vitu will go ahead in France at a date to be announced.
...

EU super middleweight champ and former WBA titlist Tyron Zeuge (24-1-1), trained by Juergen Braehmer, will make a voluntary defence of the title September 21 in Germany on a show promoted by Z! Promotion.

EBU heavyweight champion Agit Kabayel (19-0 or 22-2) will not make a voluntary defence of the title as been previously announced. Instead the defence against mandatory challenger Joe Joyce (10-0) goes to purse buds September 3 if no agreement is made before that.

Kabayel´s record at boxrec miss out on his participation in the Bigger is Better Tournament where he went 3-2. The BiB Tournament was at the time televised throughout Europe and many good fighters participated.  So for the record Kabayel lost to giant Russian Evgeny Orlov and Frenchman Fabrice Aurieng back in 2012 in a career that didn´t really take off until he signed with SES.

Don't see Joyce taking that fight, they'll go after bigger, easier names and try to get Charr's belt if they can. Kabayel would out box Joyce to a win. I like Garcia/Vitu though, that's a fun fight

Kabayel-Joyce is the only one to get reasonably excited about here. Braemer is years past it and Fielding showed how over-rated Zeuge is