EBU light heavyweight champion Dominic Boesel, 27-1, defends the title against stablemate Enrico Koelling, 25-2, on June 9 in Leipzig with SES promoting. Boesel won back the title he lost to Karo Murat in March with a points win over Serhiy Demnchenko.

Just days ago it was announced that Boesel would now be trained by Rainer Raauchfuss after being with Dirk Dzemski for seven years.

Koelling, formerly with Team Sauerland, has scored two wins since being stopped by Artur Beterbiev in the US. This fight is a mandatory defence by Boesel. 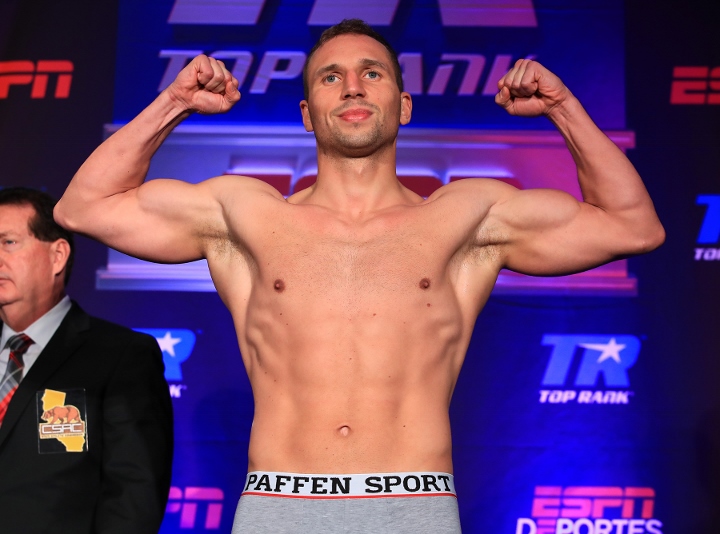 On another SES promotion, June 2 in Bad Toelz, super middleweights Robin Krasniqi, 47-5, and Stas Kashtanov, 36-2, clash for the EBU title.

Krasniqi was 1-2 after his first three fights but have since only lost to Nathan Cleverly, JuergenBraehmer and Arthur Abraham. Kashtanov held the WBA interim title in 2012-2013 - a title that eventually was lost outside of the ring in what appears to have been a promotional dispute even though it was back then announced as medical problems.

In the chief support Emre Cukur, also at super middleweight goes for the vacant EE-EU belt against an opponent to be announced. Cukur is unbeaten in ten fights.
...

Next up for EBU heavyweight champ Agit Kabayel, 21-2, is a mandatory defence against Alexander Dimitrenko, 41-3. The EBU have set May 23 as deadline for purse bids or agreements.

Dimitrenko struggled to get past Miljan Rovcanin in his last fight while the very same Rovcanin was stopped in three by Kabayel, who is promoted by SES.
...

IN OTHER NEWS: - Lolenga Mock has signed with MTK Global after his clinical victory over Dmitrii Chudinov earned him a spot in the WBC top 15.

The Congolese super-middleweight, who is based in Denmark, has just turned 46 and is on an 11-fight winning streak stretching back to 2013.