Keith Thurman will carry a new look into his next fight where he plans to fight like the fighter of old.

The decision to chop off his hair—including his trademark ponytail—was something that was in the works for a while but became a part of a plan to start anew and once again conquer the welterweight division in the year ahead.

“It’s something the wife has been putting in my ear for a while. It’s just life, sometimes you just want that fresh start,” Thurman told BoxingScene.com of the motivation behind his current appearance. “It’s just something new. For me, so many years with long hair and keeping that image—it was just time for a fresh start, new image. That’s what it is. 2020 was bonkers, nobody enjoyed that. New year, new energy. We’re hoping for change to come out. We’re hoping that people understand we’re all in it together. Diversity—all that hatred and racism needs to fly on by.

“This is just a symbol of change. You have to embrace the change. For me, the haircut is just an energetic change and just a physical change, then mentally being able to accept change. Whatever kind of change you going through—no matter what, the change happens. You just have to learn how to live with it. That’s what the hair is all about it.”

Of course, a fresh haircut alone won’t restore past glory for Thurman (29-1, 22KOs), who is still in search of his first fight since a hard-fought 12-round points loss to legendary Manny Pacquaio (62-7-2, 39KOs) in their July 2019 welterweight title consolidation clash.

The bout—which aired live from MGM Grand Garden Arena—proved to be the best-selling Pay-Per-View event of 2019, with the Fox Sports-distributed show generating 500,000 buys and more than $40,000,000 in total revenue. The show’s success paired nicely with Thurman’s win over Josesito Lopez six month prior, which drew a peak audience of 2,765,000 viewers atop their Jan. 2019 Fox telecast as the most watched fight of 2019.

Neither figure came as a surprise, as Thurman has long served as an underrated draw. The Clearwater, Florida product—who trains out of longtime coach Dan Birmingham’s St. Pete Boxing Club in St. Petersburg—generated annual-best ratings in 2015, 2017 and 2019. His 12-round win over Shawn Porter in June 2016 was second best on the year, only to an Aug. 2016 telecast featuring then-unbeaten contender Errol Spence in a slot bookended by the 2016 Rio Olympics basketball finals and the Olympic closing ceremony. 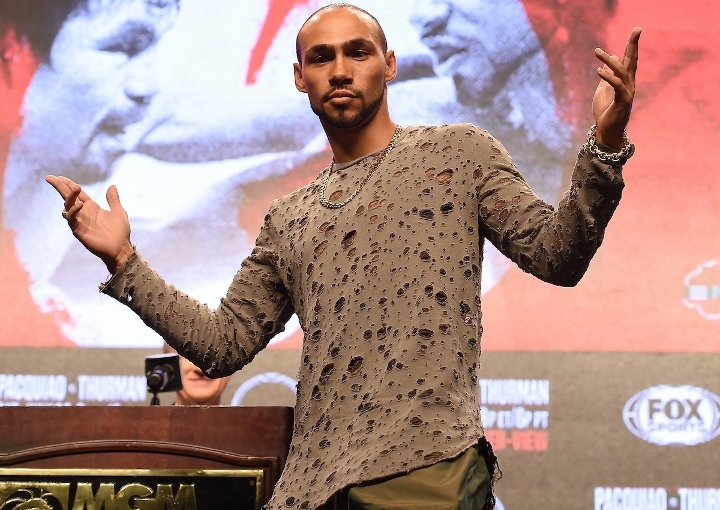 All of that success came while Thurman was unbeaten and in possession of a portion of the welterweight crown. A beltless Thurman in search of his first win in more than two years isn’t having quite as much success making his way back into the mix.

“For me, I had to accept that I’m a former champ,” admits Thurman. “There were comments asking why I talk like I’m still the champ. I don’t know how to talk like I’m not a champ. I talked like I was the champ before I got a belt. I got the belt, I don’t have the belt and now I’m gonna go get another belt. Champion is a mindset, you can’t stop that. I got to understand that change is happening, I’m in a new position. It’s been a while since I’ve been here.

The ongoing coronavirus pandemic played a significant part in Thurman remaining out of the ring for all of 2020. The present inactive count is at more than 18 months, having entered his 2019 campaign after spending 22 months on the rebound from separate injuries sustained.

The first fight back for Thurman in 2019 was a 12-round win over Josesito Lopez. From there came the chance to Pacquiao, an eight-division titlist and all-time great. It wasn’t the fight he expected to take at the time but an opportunity he couldn’t let slip through the cracks.

What’s next for the 32-year old welterweight is a matter which is still in progress. The Fox schedule remains wide open, if only due to dates having yet to be revealed by its February 27 show. Absent a superfight with the likes of Errol Spence (27-0, 21KOs), Terence Crawford (37-0, 28KOs) or even a Pacquiao rematch, literally any fight will do.

“I’m looking for a date soon even if I just have to take a stay busy fight,” admits Thurman. “I’ll do that just to get in the ring soon if nobody is willing to negotiate. I’ll be patient, too. Patience is a virtue.

“If we can get one of these guys to muscle up, maybe they start thinking ‘Let me get Thurman this year, get him to stop talking.’ Whatever, sign the contract. Where’s it at? I just love challenging myself and fighting these great fights. That’s just what I strive to do. I strive to push myself and push my opponents. I’m coming in with a new attitude, new hair, new look but it’s still the same Keith ‘One Time’ Thurman.”