As New Ballot Arrives, It's Time To Clean Out Hall Closet

This is a fun time of year.

During the first week of October, I can count on the annual International Boxing Hall of Fame ballot arriving from the boys in Canastota – which ultimately yields both a 1,200-or-so word column in which I announce my votes, and an inbox full of emails telling me I'm a blubbering idiot.

Rather than simply tucking the most colorful emails into the recycle bin and waiting for next year's batch to arrive, I decided this time to at least try to turn the cyber lemons into lemonade.

As a general rule, the responses to voting columns can be characterized one of two ways:

Either a) the readers claim the guys I've chosen have no earthly business on a Hall of Fame ballot to begin with; or b) they insist that those I've turned thumbs-down on have a clear and irrefutable reason to be included.

In truth, there are really no right or wrong answers. It'll always boil down to one person's opinion against another's. And when you think about it, that's really part of the fun of being a fan, right?

But as much this year as any other, I noticed people made their cases for fighters based less on their own merits and more on similarities to, or successes against, fighters already enshrined. 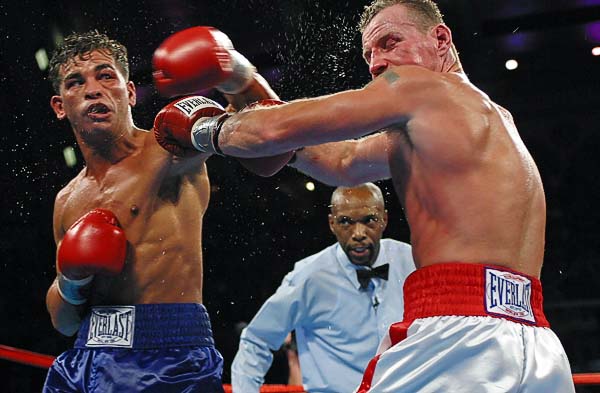 And, funny, the more of the reasons I received, the less sense they made.

“Hey Lyle, Fighter X is in the Hall of Fame. And because Fighter Y beat him once in three fights and had a similar record against left-handed power-punchers between 1989 and 2002, he belongs in, too, get it?”

In fact, such logic got me thinking how the overall quality of the Hall has been winnowed down from a true collection of the best of each generation, to a gathering of those same all-time greats – alongside a bunch of guys who've too often been mere shadows in their spotlights.

Call it “Six Degrees of Trevor Berbick” and a fun game-night exercise with friends.

But it's got no real place in determining who's in and who's out.

So I've taken another tack.

Rather than rehashing the few on 2018's ballot who'd actually add to the building’s aura – for what it’s worth, I’ll be voting for Hatton, Moon and Taylor this time around – here's a quick list of five culprits I’ve deemed guilty of lowering the standards from “all-time great” to “all-time good.”

Take them out, make room for others... and watch the property value rise.

Bobby Chacon (inducted 2005): I get it. The guy's back story was ridiculously compelling. Frightful beatings. Dramatic comebacks. Life reinventions. But look beyond the obvious action value of his fights and there's not much to warrant an immortal tag. A one-defense reign at 126 pounds, KO losses to a pair of 130-pound champions followed by another one-defense reign a decade later. Wrap it up with a three-round beatdown by Ray Mancini and it’s thanks for the memories, but no bronze plaque.

Pipino Cuevas (inducted 2002): Quick... what's your most vivid memory of the former WBA welterweight champion? My guess is anyone who didn't say his spaghetti-legged KO loss to Thomas Hearns in August 1980 had it second only to the four-round stoppage by Roberto Duran in a battle of ex-titlists 29 months later. In my eyes, if your two biggest moments in the ring were blowout losses to actual Hall of Famers, perhaps you shouldn't really be called one yourself.

Arturo Gatti (inducted 2013): If there's a more criminally overrated non-heavyweight inductee, I'd love to get his name. And as great a trilogy as “Thunder” put on against Micky Ward – yes, I'm aware that he won two – there's simply not enough to translate Gatti from the Jersey Shore to Central New York. A pair of fights against Hall-worthy foes (De La Hoya, Mayweather) yielded stoppage losses, and even the conquests listed on his IBHOF bio (Leonard Dorin, Wilson Rodriguez?!?) indicate an overblown acclaim.

Ken Norton (inducted 1992): Somewhere, when they do build the “Hall of All-Time Good,” the awkward Marine from San Diego will have a front-hallway shrine right alongside Joe Frazier's. But when it comes to the actual Hall, he just doesn't deserve his own place. Winning one of three close ones against Muhammad Ali and none against any other enshrinees -- not to mention three KO losses in two rounds or fewer – might make him a top-five contender, but he's not close to a Hall of Famer.

Dwight Muhammad Qawi (inducted 2004): I won't lie. This dude was one of my favorites. His KO Magazine poster was on my wall. I didn’t miss a fight between Saad Muhammad and Spinks and I looked on with car-crash interest when he kept grinding against Holyfield and Foreman. But let's be serious. He erased a fading action hero, beat two retreads and laid an egg in a chance at 175-pound glory on HBO. Winning a cruiser title and beating Leon Spinks hardly makes a mountain of that molehill.

Anyone knows, which new candidates have been added to the "modern" ballot?

Of all the obnoxious hot takes Fitzsimmons persists with, this topic is the one he's most petulant and annoying with. He might have a point with some of those guys but suggesting that celebrated fighters like Ken Norton should be…

[QUOTE=Pigeons;19179502]They also need to establish the amount of years you can remain on the ballot without being elected. I think it's 15 years in baseball as long as you receive at least a certain percentage of the vote. If you…

You can crap on any fighters career the way you did Ken Norton. Norton beat Ali and should have gotten the nod against Holmes while Holmes was at his best in one of the most dramatic fights ever. These are…