In his two wins over Isaac Dogboe, Emanuel Navarrete plead his case as the class of the super bantamweight division.

On Saturday evening, he simply gets to be the star of the show.

The red-hot 122-pound titlist from Mexico City, Mexico makes his second title defense as he faces unbeaten but untested Phoenix (Az.)-based countryman Francisco de Vaca (20-0, 6KOs) this weekend at Banc of California Stadium on the campus of University of Southern California (USC) in Los Angeles, Calif. The bout airs live on ESPN, where he enjoys his first main event after having twice faced and defeated Dogboe on ESPN-aired undercards.

“I’m very excited for the opportunity to headline for the first time in the United States,” Navarette (27-1, 23KOs) told BoxingScene.com. “There’s a little pressure that comes with being the center of attention, but it also provides more motivation to deliver a better effort.” 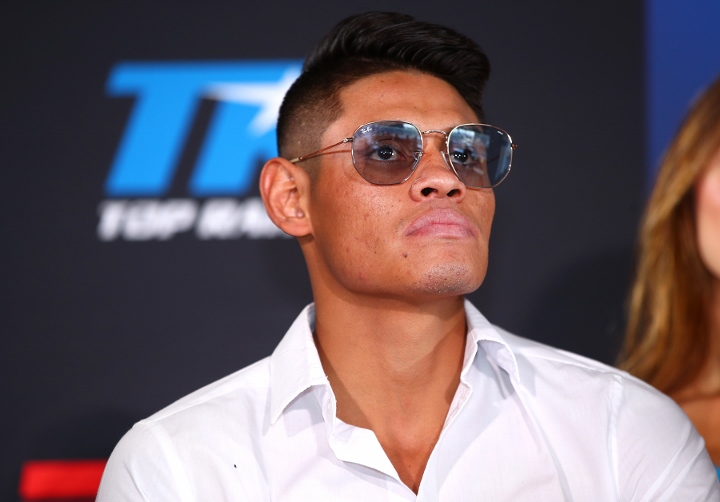 Navarrete pulled off quite a feat in stealing the show from pound-for-pound entrant Vasiliy Lomachenko last December. On the same card where the two-time Olympic Gold medalist and three-division titlist unified two belts at lightweight, Navarrete scored a significant upset in a competitive but clear win over previously unbeaten Dogboe to claim a 122-pound title.

Their rematch five months later confirmed the better fighter of the two, this time with Navarrete battering the squat former titlist en route to a one-sided 12th round stoppage this past May. The bout came in support of countryman Miguel Berchelt, who also enjoyed an easier night at the office in his 130-pound title fight rematch with Francisco Vargas than was the case when he lifted the crown more than two years prior.

This time around, it’s Navarrete who carries a supporting cast for his latest title defense. The bout is his third in the U.S. after having fought exclusively in Mexico, although he senses that he will feel right at home once the opening bell sounds.

“We’re going to fill the venue all the way up to the top with all my Mexican fans in California in attendance,” vows Navarrete, who is riding a 22-fight win streak. “Normally when you fight away of home, you can feel vulnerable and alone.

“But even in New York when I fought for the title and especially in my last fight, the fans over here have always welcomed me and showed their support. The support I’ve received shows me that I have arrived at the next level. It’s a very motivating feeling and I can’t wait to fight in front of all my fans on Saturday.”

Had no idea he was fighting tonight. Navarrete is a beast and yet another top level fighter from Zanfer promotions. No clue who his opponent is but Navarrete is quality television.