Nathan Gorman added another belt to his collection.

Gorman, trained by Ricky Hatton, is just 21 and produced a mature display at the Metro Radio Arena, exclusively live on BT Sport and BoxNation. 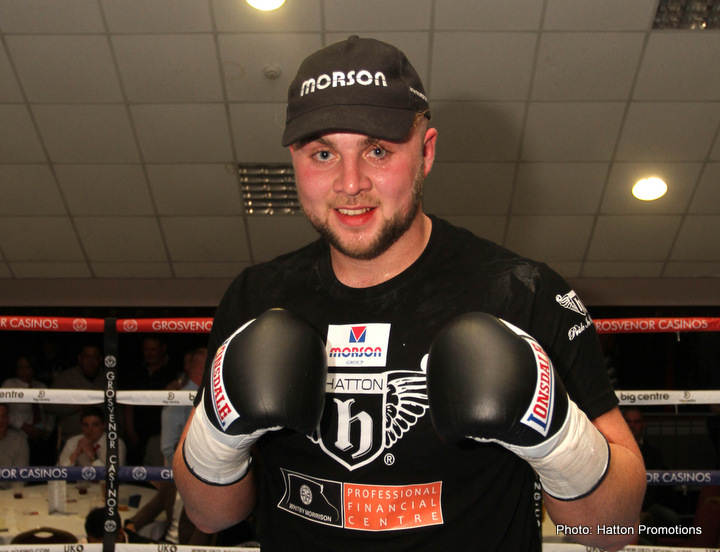 He was up against Mohamed Soltby after the original clash with Nick Webb, for the vacant English title, was moved away from.

Soltby offered very little during the fight, but a Gorman uppercut –– which Hatton had been calling for for some time from the corner –– landed the German in a spot of bother, forcing referee Marcus McDonnell to take up the count.

In defeat, Soltby –– who managed to survive the first knockdown –– moves to 13-1.

The end came with 10 seconds to go in the fifth round after a barrage of shots from Gorman (11-0, 9 KOs) and McDonnell stepped in to save the other man.

Elsewhere, Thomas Patrick Ward went the distance in the first defence of his British super-bantamweight title.

Ward, who was cut by the right eye, won the belt back in May against outgoing king Jazza Dickens from Liverpool and retained it against former Commonwealth title challenger Sean Davis after 12 hard but similar rounds.

And Josh Leather retained his IBF European super-lightweight belt with a ground out victory over Glenn Foot.

Leather, whose brother Kalam is also on the bill, had to fight back from a second-round knockdown to win, though the fact Foot was deducted two points –– one for punching on the break and the other for excessive removal of the mouthpiece –– helped massively as it was scored 114-111, 113-112 and 115-110.

Gotta catch the highlights my bt sports was messin up