Mystic Zach Gets His Big Break With The Impact Network

If you’re wondering where the newest boxing analyst on television came from, Zach Hirsch is quick to point out that, “It started when I was very young.”

“To a lot of people, I'm still very young,” he laughs.

Yes, Hirsch is very young, but in those 18 years, he’s become quite the popular handicapper, with his IPickWins Instagram account currently sitting at 349,000 followers. That popularity, plus some well-placed connections in the fight game, earned him a gig for The Impact Network’s new Championship Boxing series. And after getting his first event under his belt, he’s ready for more.

“It was a very good experience, especially getting a start so young,” said Hirsch, the son of boxing manager Scott Hirsch, best known for his work with Shannon Briggs, Jameel McCline and Cory Spinks. “I had a lot of fun and I think it's a very valuable skill to be able to interview someone and that's a skill that I can carry with me to any sport, especially boxing. I thought the card went really well, there were some exciting heavyweight fights, and then to be able to interview a champion was really cool. I had a lot of fun.”

As for any first-time jitters before the November 6 card featuring the 140-pound title fight between Kali Reis and Kandi Wyatt, Hirsch was pretty cool.

“I was a little nervous at the weigh-in interviews before I met everybody, but once I meet someone, I don't really have any nerves interviewing them,” he said. “I interviewed Evander Holyfield today, too. I wasn't nervous for that.” 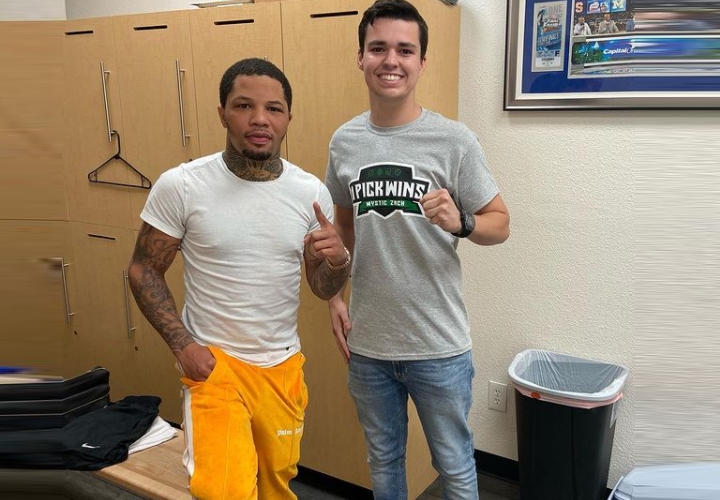 Hirsch laughs when I point out that now he’s just showing off, but the teenager is no stranger to being around top-level athletes, something evident by scrolling through his Instagram page. But in this business, while connections are nice, no one is going to sink money into you if you can’t deliver when the lights are on. Plus, putting someone on camera for what Impact said in a press release will be 36 events in 2021 is a risky proposition if you don’t have something unique to offer.

Well, 349,000 social media followers and relationships with some of the top influencers in that realm, such as Logan and Jake Paul, is something unique. But gimmicks wear off if you don’t have the goods and the work ethic to back it all up, and Hirsch has known for a long time – in his words, “since he was very young” – that this was his path.

“When I was younger, I would always pick sports and I always had an infatuation with statistics and power rankings and I love watching SportsCenter,” he said. “But my main thing was stats, and one day my dad was at a smoothie place and they were doing football pick 'em pools. You get a card and you pick every game straight up and the winner gets the pot. Each person put in 50 bucks I think, and my dad brought home a card. I filled it out and he turned it in. I forgot about it, and a few weeks later, my dad goes in the smoothie shop.”

“He won the football pool. He got all 16 picks right. We never had that before.”

“That's when I knew I had talent for picking.”

From there, it was just a matter of time before things blew up. And after a particular video, boom!

“My first video with Logan Paul, that video ended up going pretty viral on Instagram and YouTube and it was a big deal,” said Hirsch, who saw his picks coming up roses while he kept hitting the books in school, made connections throughout the sports world and even started putting the gloves on in the gym.

Eventually, one of those connections, BJ Flores, felt Hirsch was ready to take his budding career to a new level.

“I'm very close with BJ Flores and I was there in Las Vegas with him and he was always giving me tips on broadcasting, interviews and things like that,” said Hirsch. “Since he was on NBC and ESPN, he has a lot of experience, and he called Steve Marcano, who runs Impact Boxing, and BJ was set to work there as well. He told Steve about me and after that, Steve said, ‘Okay, he's on board.’ They watched some of my stuff, we got some contracts signed, and I was one of the three commentators for Impact Boxing.”

Now all he had to do was start cramming for his final exam, which came three days after his signing was announced to the world.

“Ideally, I would have a little bit more time to prepare, but once I got the fight card, I called BJ and he told me to definitely watch all the fights on YouTube,” Hirsch said. “So I watched all the fighters and wrote down notes on how each fighter boxes. I think that helped me a lot in my interviews. And I went down their boxrec.com records and made sure I knew their last five or so fights and knew their history before that and stuff like that. I made sure I knew how to pronounce their names and nicknames and unique anecdotes. But I think the most important thing was how they fight. Because if you don't know how they fight, then it's gonna be really hard to do an interview.”

First event down, Hirsch now looks forward to 2021 and continuing to build his resume and his brand. Yeah, that’s what people do now; they build brands. It’s at this point in the story where the cynics come out, wondering how an 18-year-old kid gets a gig like this without putting 20 years into the sport. And Instagram followers? God forbid that helps anyone get ahead.

But here’s the thing; while his buddies were spending 10 hours a day playing video games, Hirsch was hustling, watching, learning and sacrificing to get where he is. You can’t begrudge anyone that, whether they’re 18 or 80. If you did the work, then you deserve the breaks you made for yourself. Oh yeah, and he’s a college student on an academic scholarship studying Sports Management at Lynn University in Boca Raton.

There will be haters. But Hirsch is too busy working to pay attention to them. I ask him if he’s prepared to have no social life doing 36 fights next year.

“Hopefully I can get some friends on these trips,” he said, clearly focused on the end game, social life be damned.

“I think the main goal was always to get on TV and this is TV, so I think it's a really great first start, especially at 18 years old,” said Hirsch. “Obviously you have the DAZNs of the world, the ESPNs of the world and the UFCs of the world, who have bigger platforms, and now with the internet age, there are so many good podcasts and things like that, and the goal is for me to be able to talk about all kinds of sports on as big of a platform as possible. That's always been the goal since I started last year, and right now, boxing has been the number one thing, and I'm fully committed to commentating boxing right now. I even began training boxing this year, so there's definitely been a lot of preparation in that, but I'm ready to cover any sport.”

Do you want to doubt him? I won’t. Maybe one day he’ll wake up and be tired of all of this, but at the moment, it looks like he’s going to stick around for the long haul. And along the way, he’s making sure to take it all in.

“Sometimes you gotta relax and let it soak in,” he said. “It seems to all come in waves. When it rains, it pours, so usually when I get one gig, ten others come in, and when I get one interview set up, three others come in. Sometimes I'll have a dry spell where not too much is going on, and sometimes everything is going on at once, which is kind of what's going on right now. I just finished up doing an odds video for Bare Knuckle Fighting Championship, so I'm really excited to get my start on TV and major networks. I am able to soak it in, but obviously in the future I might regret not soaking it in more (Laughs), but for now, I'm enjoying the ride and trying to take as many opportunities as I possibly can.”