Driving through a quiet town in Connecticut, you can easily miss the Manchester Ring of Champions Society (ROCS) gym, but once you do find it, there’s no question about who trains there. And in a gym that is the home for world champion Katie Taylor and New England standout Matt Remillard, there’s only one banner outside reading that ROCS is the “Home of Marvelous Mykquan Williams.”

And though the subtitle reads “2016 Olympic Hopeful,” the 20-year-old put those dreams of competing in Rio de Janeiro to rest as he chases gold of another sort in the pro boxing ring.

Already 11-0 with seven knockouts since entering the punch for pay ranks in April 2016, Williams will be in his first main event at Foxwoods on Saturday when he faces Matt Doherty in an eight-round junior welterweight bout. It’s also Williams’ first start since picking up the WBC USNBC silver title with a first-round TKO of Orlando Felix in May, and while he admits that being in the headlining spot on this weekend’s fight poster is cool, it was the Felix fight that saw him make sure to get a poster of his own to take home. 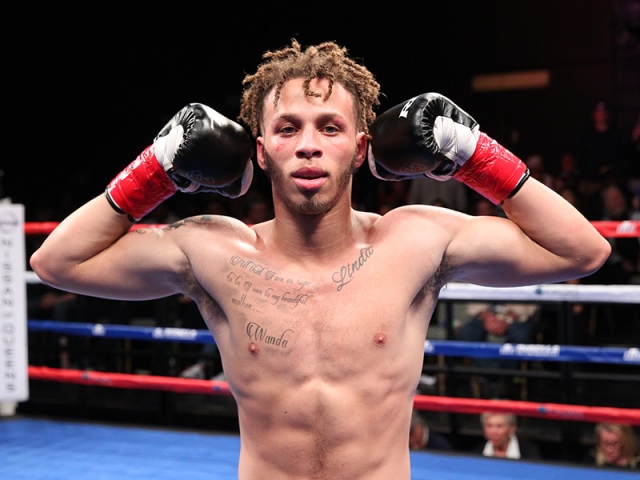 “That’s when I fought for my first belt,” he said, and if you’ve seen him fight or talked to folks around the east coast fight scene, it’s just the first of many. But he’s not rushing things.

“It doesn’t happen overnight, so staying patient is very important,” said Williams. “It’s what I’ve been taught and what I know. When the time is right and you get that phone call, I’ll make it happen and I’ll be ready. Everything’s going in the right direction and it’s all about making smart decisions and smart moves. You never want to rush things because when you rush things, that’s when something goes bad. And I’m only 20, it’s not like I’m coming into the game late or anything like that.”

And while he’s just 20 and still a student at Manchester Community College, he’s no neophyte in the fight game, having started boxing at the age of eight under the tutelage of veteran trainer Paul Cichon. It’s a tight bond between the young gun and the grizzled vet, and it all comes together in a gym with no juice bar and no high-tech gear outside of a sledgehammer and a tire.

“It’s good,” Williams said. “The atmosphere is old school and it’s strictly about going in there and working hard. My trainer always liked that old school look, and it’s important to go in the gym, work hard and be away from all the little distractions and stuff like that.”

At his age, distractions can be more than little, but as Williams juggles school and a promising fight career, he also knows that people are watching. And while a tweet on his birthday on April 6, reading, “Happy to see 20!” didn’t have any deeper meaning to it for Williams, he does admit that seeing what’s going on in the world around him does make him appreciate making it to the big 2-0.

“I’m just glad and blessed that I’m staying on a positive path and not being in any danger,” said the East Hartford native. “Nowadays, a lot of the young kids are dying and the world’s crazy right now.”

So what better way to deal with this crazy world than to give those people watching – the kids – something to strive for? That’s the kind of light Williams would like to be.

“I feel like I’m definitely an inspiration to the youth and my age group,” he said. “I’ve been dedicating myself since I was eight years old up until now on one thing, and progressing and growing as a person and a fighter. And I feel like I am carrying the city on my back. I’m accomplishing a lot at a young age and I’m just gonna continue to do that. And eventually, if people haven’t already, they’re gonna start to take notice.”