That’s the first sentence said to the 22-year-old as he prepares for his ShoBox bout against fellow unbeaten Yeis Gabriel Solano. The next one is, how long has he been waiting to hear the first one?

“Man, listen. It's been a while, but we're here now, so I can't complain. But yeah, it was a little crazy last year.”

Crazy enough that it may have been the worst year yet, at least career wise, for the junior welterweight prospect.

“As far as boxing and the way my career was basically put on pause, yeah, it was definitely the worst year ever,” said Williams, who hasn’t been seen in action since a draw with Tre’Sean Wiggins in October 2019. That was a bout most observers outside of two judges believed he won, but the Hartford native shook it off and was gearing up to start making his move on the next level of competition in the 140-pound weight class in 2020.

“After the Wiggins fight, we were definitely looking for this year to be a big one, but obviously COVID,” he said.

The coronavirus pandemic didn’t just shut boxing down for a long stretch, but the virus hit his longtime coach Paul Cichon, sidelining him for a spell. Eventually, Williams was able to get back into the gym, Cichon joining him when he recovered, and the year was basically spent training for a fight that never came. That dedication, a willingness to work without a goal at the end of the tunnel, says a lot about Williams.

“We needed to stay in some type of shape just in case we got a call,” he said. “Last year, for the fighters that did fight, there were a lot of fights that came up short notice, so it was very important to stay in decent shape. I had to be mature and look at the bigger picture and look for the positives down the line, instead of the current situation we were in.”

So there were positives in the worst year ever?

“Not too much happened besides the COVID,” said Williams. “I wasn't fighting or anything, so that's not a positive thing, but besides my trainer getting COVID, luckily he made it through and everyone else was healthy in my family and no one got sick at all. We also stayed in the gym and I think that's very important because in case we did get a call, we would be in some type of shape instead of just getting off the couch. But really, the positive thing was...”

A long pause. Then a laugh.

“I don't even know how to answer that question,” he continues. “I guess everybody remaining healthy and me being in the gym trying to stay as focused as possible. That's probably the best answer I can give you.” 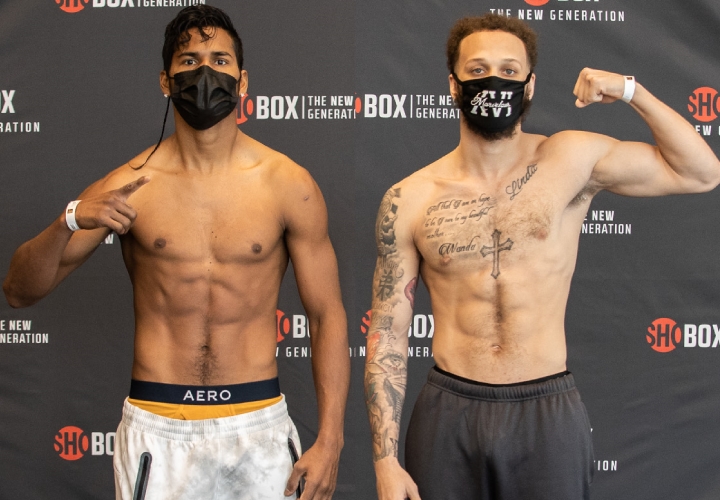 Luckily, those days are now behind him and he can focus on his return against Colombia’s Solano, who’s 15-0 record will be pitted against Williams’ 15-0-1 slate. On paper, it’s Williams’ toughest test to date, but when the call came in for the fight, he didn’t hesitate to take it. Then again, he doesn’t hesitate to take any fight offered to him.

“I was wrapping up training camp for a fight I was supposed to have in Mexico on the 12th of December, we were in the gym and he (Cichon) asked me, ‘What do you think?’ I always respond to him the same way and he knows it. I just shrug my shoulders, like yeah, take it. And that was that. He looked at the guy, he called them back and accepted it.”

It’s almost as if the Boxing Gods are rewarding Williams for getting through a rough 2020 by giving him a main event on Showtime that’s in his backyard at the Mohegan Sun Casino in Uncasville, Connecticut. And Williams is happy about the whole scenario…with one exception.

“It does feel like it's a good way to start the year based on the platform I'm fighting on, it's my first fight in 14 months and I'm at home; all the good stuff,” he said. “But, at the same time, the platform that I'm fighting on is such a big deal and it just sucks that COVID is still going on and I can't have a crowd there. That's the least of our worries, but it would have been pretty cool to have people from my hometown there to witness my fight. But it's definitely a good way to start off the year. I think that after this performance, it will open up a lot of doors and a lot of eyes in the boxing world for me, so I'm excited.”

“Hopefully, this year is the year,” Williams said. “I always see a saying that it only takes one year to completely change your life and circumstances around. So hopefully this year is the year, but if not, then we'll just keep working hard and wait on our moment, because in boxing, everybody gets their moment, everybody gets their time to shine. So we're not too concerned about rushing anything.”