UNCASVILLE, Connecticut – Bakhram Murtazaliev maintained his position Saturday night as the IBF’s mandatory challenger for the winner of the Jeison Rosario-Jermell Charlo fight.

Woods went down after taking several hard shots from Murtazaliev, including a thudding right hand to the side of his head. Their scheduled 10-round middleweight match ended 43 seconds into the fourth round. 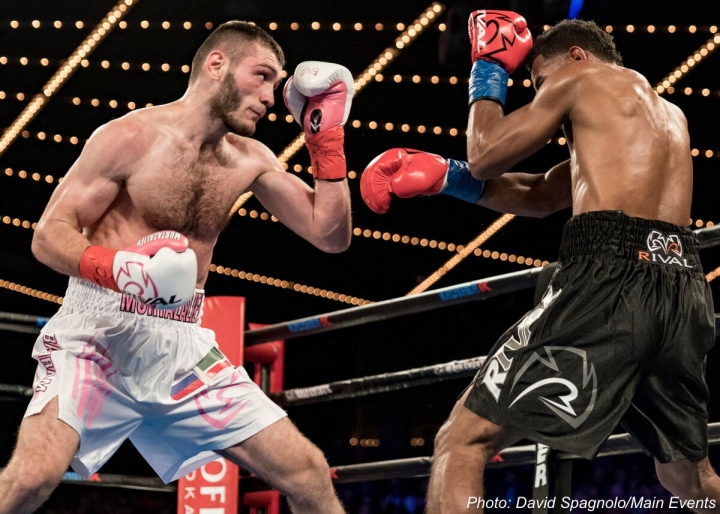 Murtazaliev, the IBF’s number one contender at 154 pounds, fought on the non-televised portion of Showtime Pay-Per-View’s event. He was on standy to replace Jermell Charlo (33-1, 17 KOs), the WBC champ, or Rosario (20-1-1, 14 KOs), the IBF/WBA champ, in case either fighter tested positive for COVID-19 or otherwise withdrew from their main event.

Murtazaliev hammered away at Woods with rights and lefts to his head throughout the third round. Woods absorbed all of those shots without going down, but he stumbled as he headed back to his corner as soon as the third round concluded.

Woods stood and traded with Murtazaliev in the second round, but he continually came up on the short end of those exchanges. A right hand by Murtazaliev made Woods hold him, though Woods later landed a flush left hook that got Murtazaliev’s attention.

Woods connected with a left hook up top that made Murtazaliev go down less than a minute into their fight.

Murtazaliev didn’t seem hurt, as he briefly went down to one knee and quickly reached his feet. He then unloaded a left-right combination that backed up Woods later in the first round.

Those punches put Woods on the defensive for the remainder of the first round.

[QUOTE=Satir;20781978]Murtazaliev is a big JMW himself and hits hard, he's stronger and more skillful than banana guy, i think he has a good chance of beating Jermell[/QUOTE] Yeah the guy that just got dropped by a complete nobody. He’s green…

Murtazaliev is a big JMW himself and hits hard, he's stronger and more skillful than banana guy, i think he has a good chance of beating Jermell