Steven Ward (12-0, 4 KOs) discovered something about himself in his fight of the year contender win over Liam Conroy in June.

In trouble in the second round, down in the fourth and suffering a bad cut ticked boxes of durability, recovery, heart and, eventually, skill to win the vacant WBO European Light Heavyweight title in Belfast.

“I think that was a good example for me to know that if gets tough, spit and sawdust, then I had it in me to win which I always knew,” said Ward referring to his most recent win.

Ward had to dig deep and pass a gut check but he dealt with it. It was an enthralling bout, one that hopefully is remembered when the end of the year awards are being handed out. But, for the man from Belfast, it was time to assess what he did wrong when he reflected on it afterwards with his team.

“The fight was good, good for the fans, but there were times when it was careless boxing. It was very wild. You should be at a point where you’re coming away from a fight like that and you’re learning and if you’re not there’s no real point in boxing.

“When we got back to the changing room Nigel Travis [part of Ward’s training team] said to me we’ll have a chat about that fight. I did a lot of things wrong and we’ve talked about them. It was a great fight but I think not long after it was taken off its pedestal from what I did wrong. In training I’ve got myself in the same positions but there’s not been the same outcome as in getting a bit wild. But listen, it was good to have it, because it’s good to know I have that in the tank if I need it. Them demons were answered in my head which is one thing a fighter should always have.” 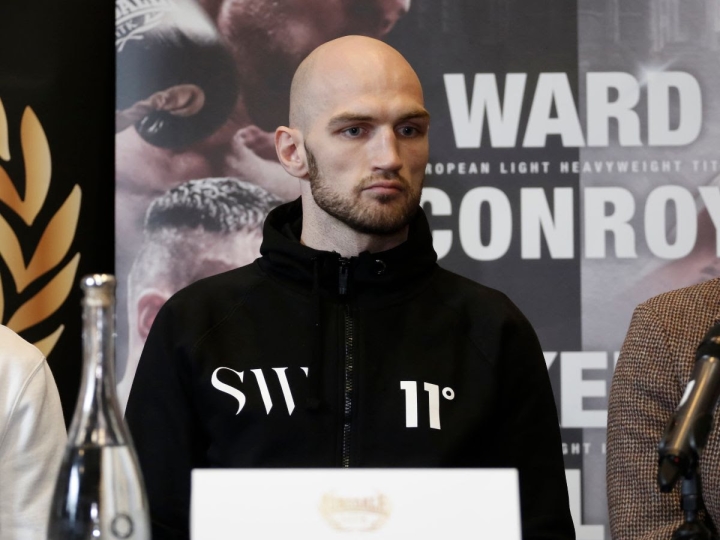 Ward and Conroy conversed in the changing rooms afterwards. Respect being thrown both ways. Two honest, fighting men who gave the Belfast crowd more than their money’s worth but exchanged plenty of pleasantries once the punches had stopped.

The pair are in each other’s vicinity once again but this time in the form of a tournament. Ward, Conroy and half a dozen others take part in the third edition of MTK’s Golden Contract, on Saturday night, which this time offers up the light heavyweight division.

When the draw was made there might have been some of us who were hoping the pair would face each other once again. For now, it’s not to be. Ward faces Ricards Bolotnik while Conroy takes on Andre Sterling. The rematch will have to wait, for now.

“The second fight would be completely different to the first,” Ward said.

“I think if we fought again it could end up the way it did the first time but it could be a completely different scenario as well. I like Liam, he came in the changing room after, he had no chip on his shoulder. He’s dead on. We sat and talked. I’d love to see me and him in the final. Liam’s a good fighter. He’s a bit like myself, happy to stand in the background and doesn’t shout from the hill tops like some of the other fighters. He’s a very underrated fighter and he’s a nice guy.”

Ward recently spent some time in America as part of Carl Frampton’s team while ‘The Jackal’ prepared for and eventually defeated Tyler McCreary in Las Vegas. A big fight feel, training overseas, things would be perhaps different to what he is used to. Was it a chance to take some mental notes to maybe fall back on if his time at the top arrives in the future?

“You notice how things are running, it’s great motivation to be seeing where Frampton’s fighting. It’s a big incentive to get to that point. I think no matter what level you’re fighting at it’s a very similar approach.”

Ward is part of a tight knit group led by trainer Jamie Moore and Nigel Travis. Ward, Frampton, Jack Catterall, Chantelle Cameron, Martin Murray, Rocky Fielding, Marc Leach and Aqib Fiaz are a likeable bunch of personalities who know when to work hard and when to have fun. Some joined up with Moore after training with the late, great Oliver Harrison who died earlier this year after an illness. Moore has taken over the reins admirably and successfully and is putting into practice everything he learned from his friend and teacher. Ward is grateful for his time working with Harrison and believes he is continually evolving as a fighter and said he is in a “good place with the boys.”

“At the start it was brilliant training with Oliver Harrison until he took sick and things have just played out the way they have.

“I’m a big lad for the weight. A lot of it is down to discipline and professionalism and not messing about. Every time I do the weight I feel like I’m learning how to do it better. I feel like I’m at the point now where I want to be. I had a couple of gimme fights and there were fights that fell through but I’m happy to be in meaningful fights and testing ones now. It sounds stupid again, but I need to be constantly challenging myself. That’s the main demon in my head. I feel like everything is going well and I feel the Golden Contract is a perfect time for me for the stage I’m at in my career.”

Ward spoke about demons a few times during this interview. A word that is normally associated with battling mental issues or dealing with problems that are eating away at you. And something we hear more and more from professional athletes. For Ward, and particularly his boxing career, the word has a different meaning.

“There is no harm in saying that there are fighters out there that, if it happens to them, it just disheartens them and they may look for a way out or an easy option. I felt like that was something I would never have, but being in the situation in the Conroy fight, when that happened, I’ve been able to prove myself. Someone can say they are the best but sometimes you can dig down deep enough and they know that they’re not the best. And I think that fight proved I’m tough, I would stay in there and that settled the demon in my head.”

MTK Global Tournament Golden Contract give these fighter the opportunity to change his career to the better and the next level of their boxing chapter.:boxing: