Moloney: This Is My Destiny; I've Got What It Takes To Beat Inoue

Jason Moloney waited for months to see whether a unification bout would play out between Naoya Inoue and John Riel Casimero.

The moment it fell through the cracks, the former title challenger was ready to jump in and save the show. Now he’s prepared to shock the world when he faces Japan’s Inoue in his second bid at a bantamweight crown. The two will collide on October 31, live on ESPN+ from The Bubble at MGM Grand in Las Vegas.

“For 17 years I’ve dedicated my whole life to this sport for this moment,” Moloney explained to ESPN’s Bernardo Osuna while on hand for Teofimo Lopez’s lineal lightweight championship win over Vasiliy Lomachenko on Saturday. “I can’t wait to get in there and slay “The Monster” and become the number-one bantamweight in the world.” 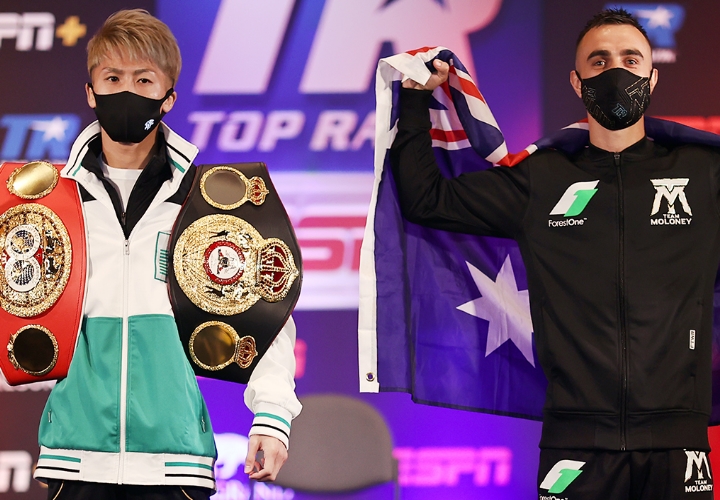 Inoue (19-0, 16KOs) will make just his second career appearance in the United States, with the upcoming title defense marking his first piece of ring action since a 12-round nod over Nonito Donaire to win the World Boxing Super Series bantamweight title last November in Saitama, Japan.

Moloney (21-1, 17KOs) has fought twice in that span, including a 7th round knockout of Leonardo Baez in this very venue this past June. The 29-year old contender from Kingscliff, Australia spent five weeks in Las Vegas preparing for the event, following a 14-day quarantine period prior to leaving home. A similar formula has come of this event, having arrived in town earlier this month.

“I think it’s a big advantage, having already fought here in this ring,” believes Moloney. “I love it here in Las Vegas this is my second home now. I’m looking forward to giving a great performance and going home with three belts around my waist. I’m very confident.

“I believe this is my destiny and I’ve got what it takes to beat him. This is the opportunity to prove it.”

Got a feeling Inoue is going down.