Molina: I Have To Give a Guy Like Ruslan My Undivided Attention

Ask a boxer with a scheduled bout of his future plans and the answer you are all but guaranteed to receive is that the current task at hand is all that matters.

John Molina Jr. has long ago reached a point in his career where another loss should have bumped him from relevant bouts. The offense-minded athlete from California still manages to land big fights, though often as the B-side of any given promotion, which is to say he goes in as the underdog.

It’s the role he’s once again asked to play ahead of his June 11 clash with former 140-pound titlist Ruslan Provodnikov. Their upcoming Showtime-televised headliner – which airs live from Turning Stone Resort & Casino in Verona, New York – is being billed as a potential Fight of the Year candidate, giving the ring styles of both combatants. 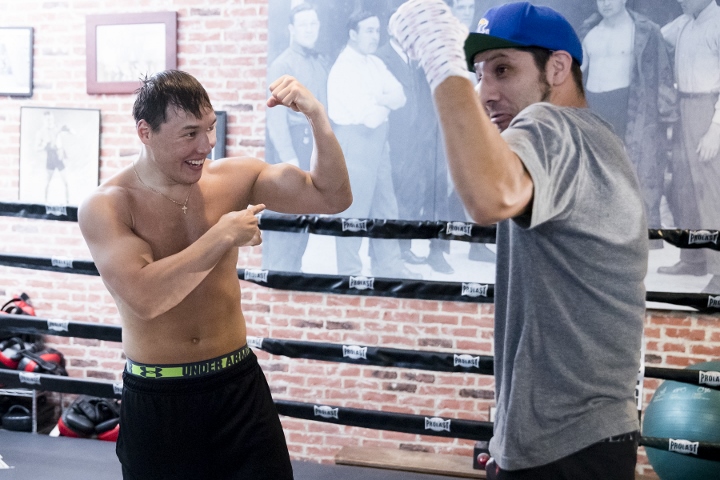 Molina’s reputation as a boxer who brings his all every time he steps into the ring is what earns him these opportunities. However, he’s in desperate need of a win to advance beyond his current steppingstone role.

Needless to say, no other fight is on his mind than his upcoming battle with a face-first slugger who can punch a hole through a brick wall.

“Ruslan is a fighter that deserves my undivided attention. I gotta focus on Ruslan,” Molina (28-6, 23KOs) stated during a recent media conference call, not at all interested in life beyond June 11.

Truthfully, the fight is must-win for both participants. For all of his in-ring thrills, Provodnikov (25-4, 18KOs) is 3-3 in his last six starts. Two of the three losses came in Fight of the Year-level ring wars, falling just short versus then-unbeaten welterweight titlist Timothy Bradley in their March ’13 slugfest at StubHub Center in Carson, Calif., and then again last year in a vicious 12-round war with Lucas Matthysse last April at Turning Stone.

Still, the Russian slugger remains must-see TV, evident by the strong ratings he’s produced versus Bradley and Matthysse, as well as the likes of Chris Algieri and Mike Alvarado. ­­

Molina entered that status following come-from-behind knockout wins over Hank Lundy (July ’10) and Mickey Bey (July ’13), both of whom were unbeaten prospect and far ahead on the scorecards at the time of their respective stoppage defeats. Some of that same magic appeared in a non-stop thriller with Matthysse in April ’14, with Molina scoring two knockdowns before falling down and out in a bout hailed by the Boxing Writers Association of America as the 2014 Fight of the Year.

However, the bout was also the start of a three-fight losing streak, dropping lopsided decisions to Humberto Soto and Adrien Broner before returning to the win column with a 3rd round stoppage of Jorge Romero in boxing’s version of an open lane layup last November.

The matchup was necessary in getting Molina back into this position, as a victory over anybody heading into a clash with Provodnikov looks better than entering the same fight having lost your last three starts.

Molina understands this reality, as a win in his last fight hasn’t provided him with a false sense of confidence. Rather it has restored his focus on what the near future has in store, realizing what succeeding in the present can lead to in the future.

“Immediately following the fight, I'm sure I'll have a whole slew of answers for you” Molina joked of the fights he’ll plan to seek down the road. “I have to give a guy like Ruslan my undivided attention. He deserves that respect.”

After Ruslan KO's Molina id like to see Ruslan vs Spence.