Mikey Garcia: Terence Crawford Would Be A Great Fight For Me

If Garcia (35-0, 29 KOs) defeats Zlaticanin (22-0, 15 KOs) on January 28 at MGM Grand in Las Vegas and cannot secure fights against other lightweight title-holders, he would like to move up to 140 pounds to challenge Terence Crawford.

“I think it would be a great show, a great fight,” Garcia told BoxingScene.com before a press conference Thursday in Los Angeles to promote the January 28 card (Showtime). “He’s the top man right now at 140 pounds. If I’m moving up to 140 pounds and he’s there, and we could actually get that fight, I definitely would do that. 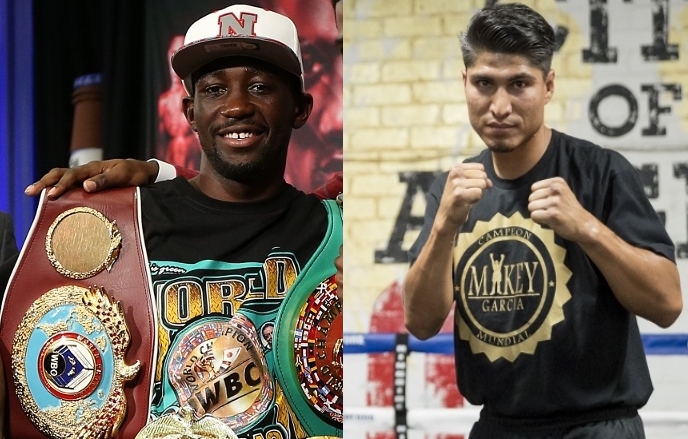 “You just have to remember that he’s managed and promoted by different people, and sometimes it’s those people that prevent certain fights from happening. As a fighter, and I’m sure Terence feels the same way, he’s willing to fight anybody and everybody. But sometimes they don’t happen for other reasons.”

A Crawford-Garcia negotiation would be especially tricky because Crawford’s promoter, Bob Arum’s Top Rank Inc., and manager, Cameron Dunkin, used to fill those same roles for Garcia. Top Rank and Garcia reached a settlement in April that ended the promoter’s partnership with the Oxnard, California, native, who sued his former promoter in 2014 because he didn’t think he was being offered sufficient purses.

“If it’s big business, including the promoters, not just the fighters, then they’re willing to work,” Garcia said. “It might not happen right away. Look at Mayweather-Pacquiao. It took them five, six years to get it done. But it was huge business. Everybody was gonna get some of the pie. I’m not saying [Crawford-Garcia] is gonna be big like that, but if it’s a big fight, where everybody’s gonna be happy, promoters and managers put their personal issues to the side for the sake of business.

“But as a fighter, you’re willing to fight anybody and everybody. You wanna establish yourself and leave a great legacy and fight the champions that are worth fighting. So if [a Crawford fight] is available, and we can actually get that done, then let’s do it.”

Garcia denied, though, that he ever was offered a fight against Crawford while Top Rank remained his promoter.

“I heard Bob and some people say that they had offered me that fight, and that I was asking for $2 million,” Garcia said. “That’s a complete lie. That never happened. That fight was never offered either to me or Terence.

“Even Terence, I heard him in an interview saying that he never heard of that offer, for that fight. Because that’s a complete lie. They never offered him or me that fight. But they’re lying, saying that they did and I was asking for $2 million. That’s complete B.S. That was never true. But if it does happen, let’s sit down and talk real numbers. Let’s make it happen for real.”

I will say it now, García wins

It would be a good fight for boxing fans but Mikey should stay far away from Bud.

[QUOTE=theface07;17247494]He may not have the skill set of someone like Rigondeaux but that fight would do WAY better as far as ticket sales and broadcast numbers are concerned than ANY fight with Rigondeaux. He has remarkable boxing skills but is…

I like Mikey, but the guy took a career holiday so he can wait in line.

TC can wait! Let's get the easier fight to make done first! Mikey Garcia vs. Adrien Broner @ 140! Make it happen!