Whenever Mikey Garcia can box again, the four-division champion wants a difficult fight.

Garcia isn’t looking to simply stay busy once the COVID-19 pandemic ends. Manny Pacquiao tops Garcia’s wish list, but he is intrigued by possible bouts against Shawn Porter, Danny Garcia and Keith Thurman if his much-discussed showdown with Pacquiao doesn’t come together.

The 32-year-old Garcia (40-1, 30 KOs) wants current or former welterweight champions, not nondescript underdogs. The Oxnard, California, native explained his position on potential opponents to Premier Boxing Champions’ Ray Flores as part of an interview that was posted recently to PBC’s YouTube channel.

“I just don’t get excited for a tune-up fight,” Garcia said. “That’s not gonna get me excitement, and it’s not gonna allow me to perform. You know, I need a big challenge. I need a big name, a big opponent that can challenge me and push me, you know, in order for me to perform. You know, this last fight with Jessie Vargas, he was available, he fit the bill that we wanted, the fight at the time.

“We looked at other names, but they were unfortunately unavailable. They weren’t available for the time that we needed. And then some of the names that were brought up to me were just not exciting. You know, they were tune-up fights, they were comeback fights, and I just didn’t want that.” 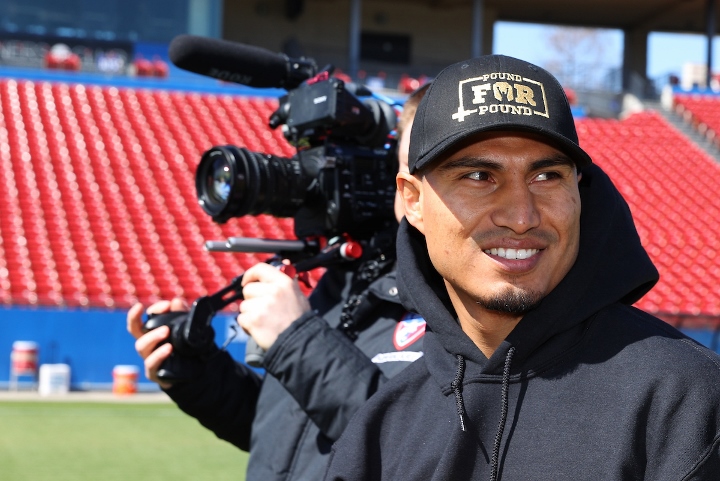 Each judge scored all 12 rounds for Spence (26-0, 21 KOs) in their FOX Sports Pay-Per-View main event in March 2019 at the Dallas Cowboys’ AT&T Stadium in Arlington, Texas. Garcia knocked down Las Vegas’ Vargas (29-3-2, 11 KOs) in the fifth round and beat him by comfortable margins on two scorecards February 29 at Ford Center at The Star in Frisco, Texas.

“You know, so it was the right opponent – a big, natural guy that I can showcase my skills against. And now I’m looking for bigger fights. You know, I’m looking for the biggest fights available. … I’m willing to fight anybody, you know, that’s available and that makes sense. That’s how I keep growing. That’s how my fans keep growing and that’s why they love me so much.”

1) Pac 2) Danny 3) maybe Taylor at 140 Say what you want about Mikey, but he fights for a purpose. Belts, money, and entertainment. Taylor has belts, Danny would be fireworks, and Pac brings the money. I'd be happy…

I'd like to see him against Porter, it's a good next fight for both guys; winner in line for a title shot. I see a big win for Porter!

The so called tune ups may be all that's on offer straight away. Let's see what's what when the green lights given. Everyone can talk now but I'm betting it's a different story when things are back on the way......…

The truth is that there all in the same boat & time waits for man, which is why the likes of Fury/Joshua, Taylor/Ramirez, Smith/Benavidez or Saunders, Canelo Vs Charlo or GGG & Loma/Lopez/Davis & Haney ETC need to unify ASAP!!.....

Wants the biggest paychecks available. Can't say I blame him.