Mikey Garcia: I Would Love To Get In The Ring With All The Top Welterweights

Armed with his first welterweight win, Mikey Garcia is ready to mix and match with as many top fighters as it takes at the weight in order to get to a fifth divisional title.

The former four-division champ came out of a 12-round victory over Jessie Vargas this past February with a wish list firmly in his grasp. There’s not a soft touch among a lot that includes a who’s who of current and former titlists in Manny Pacquiao (62-7-2, 39KOs), Keith Thurman (29-1, 22KOs), Shawn Porter (30-3-1, 17KOs) or even a rematch with unbeaten and unified welterweight titlist Errol Spence (26-0, 21KOs), his lone career conqueror.

“I would love to get in the ring with all of them,” Garcia (40-1, 30KOs) insisted during the most recent installment of Time Out With Ray Flores on the Premier Boxing Champions (PBC) Instagram Live feed. “I think a great matchup would be Danny Garcia. I think that would be a terrific matchup.

“I think he’s in search of an Errol Spence fight or Manny Pacquiao. Maybe he’s trying to get that fight before facing someone like me. He already fought Keith, already fought Shawn Porter. I haven’t fought them, so I’m willing to get in the ring with Keith and with Shawn. I think those would be terrific fights also.” 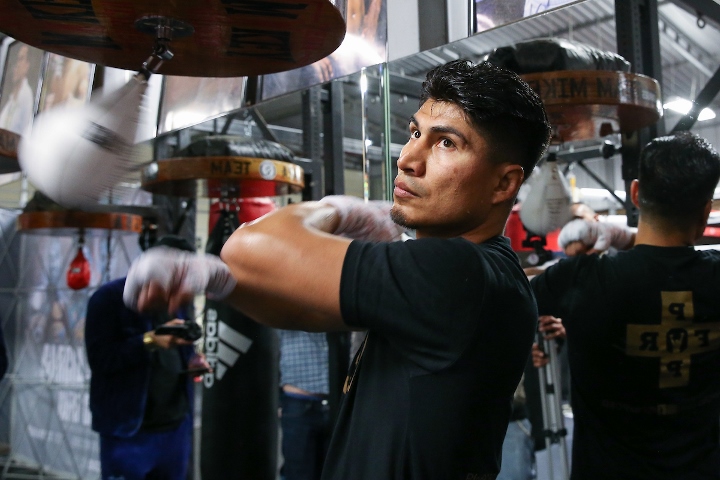 Garcia was significantly undersized both in his loss to Spence last March as well as his competitive but clear win over a former two-division titlist in Vargas (29-3-2, 11KOs). It’s for that reason he believes he matches up extremely well with the likes of Pacquiao and Danny Garcia, both of whom moved up from lower weight classes and are generally smaller than full-fledged welterweight such as Spence, Thurman and Porter.

“Manny Pacquiao would be the ideal fight for me,” notes Garcia, both in terms of size and the ridiculous payday that would come with such an assignment. “That would be what I would entertain the most. If that offer was presented to me, I would definitely explore that the most.

“If that’s not available, if Manny says ‘I’m not fighting Mikey for whatever reason, I’m fighting Danny or Errol’ or whoever, then I will have to look at whoever’s left. If [Pacquiao] decides to fight Shawn Porter, then I may look into fighting Danny Garcia. But if Danny is looking to fight Errol, then the only one left out would be Keith. Maybe I go with Keith. I think all of these fights will be huge fights.”

The general boxing public is hoping for a slew of significant matchups once the sport at the top level can return to play out in front of a live viewing audience. Any combination of the aforementioned names would do the trick, along with providing a true competitor like Garcia all of the reason to get up in the morning.

why did he leave PBC? They have a round robin going between their Welterweights going back years. It's a closed system (ask Crawford). Maybe Bob with throw you a bone.

I hope Mikey gets Pacquiao for mant reasons.

[QUOTE=Curtis2;20542497]I left them off the list because they're not deserving of being in the top WW list...the top 4 WW's I have listed would beat all names you have mentioned...no doubt about it..[/QUOTE] This is among the dumbest posts ever…

[QUOTE=Curtis2;20542743]Mikey ALREADY BEAT LIPINETS BY UNANIMOUS DECISION in 2018, no kidding, @ Junior WW, we're talking WW today and Lipinets wins at WW in 2020..No jab Ennis would stop Mikey, early too...Your assessment of TC sounds like something a no…