It’s an event. It’s a curiosity. And, yes, it will probably be a fight.

It seems like no one knows what to expect when a 54-year-old Mike Tyson meets a 51-year-old Roy Jones inside the STAPLES Center on Saturday because the contest comes under the exhibition banner.

We know that the rounds will be two minutes in length and there could be as many as eight of them.

We know they will have 12oz gloves and no headgear.

We know it’s on the streaming network Triller in the USA and on BT Sport Box Office in the UK.

After that, and when the bell goes, God knows what will happen.

Word came out this week that there’d be no knockouts but that was soon squashed.

Will there be a gentlemen’s agreement just to move around, put on a show and no one gets hurt?

Will Tyson come out bombing? Will Jones try to sting Tyson to keep him at bay? 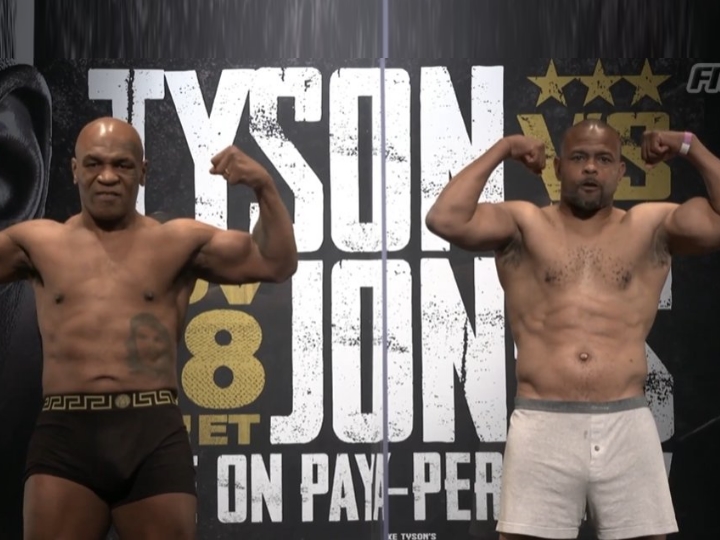 It’s felt a little wrong seeing the tactical breakdowns on some channels.

How on earth can you look at a video of Tyson routing Trevor Berbick more than 30 years and expect him to be doing that now in his fifties?

How can you look at a lightning Roy Jones from the 1990s and think he’s capable of doing that same stuff, even in bursts?

They couldn’t do what they did at their phenomenal bests by the end of their careers, let alone after years out of the ring.

And, of course, there’s a moral debate to be had.

These are not just two guys who have boxed thousands of rounds in their lives and taken umpteen concussive blows but they now own older brains and in the words of Dr Margaret Goodman, “it’s a fact and not ageism that fighters are in a greater danger over a certain age no matter their physical condition.”
Tyson looks the part but you can’t see what happened to his brain when he was dropped by Greg Page (sparring), Buster Douglas, Evander Holyfield and Danny Williams even before you go back to those huge right hands of Lennox Lewis.

And this is even before you go further back to the hard rounds he sparred as a kid, before his brain was developed.

Of course, Roy is in the same boat but he also has gruesome one-punch knockout losses on his record to Antonio Tarver, Glen Johnson and Enzo Maccarinelli to name three.

It’s all too easy to recall show-stopping finales, but what one cannot accurately measure is the impact that thousands upon thousands of blows have already had.

CTE [chronic traumatic encephalopathy] is a dirty acronym in professional sports and more research is being done on it all the time but it’s not a myth. It was once called punch drunk syndrome, then became dementia pugilistica and the symptoms are not just physical, slurred speech, an unsteady walk but they are emotional and psychological, such as short-term memory loss, depression, poor decision making, mood swings and much more.

And for what? Is it really worth it?

The flipside is the fighters should be aware of the risks, both long and short term, and that as grown men they can carry on and do whatever they choose. But there will be an element of guilt if these two start cutting loose and banging each other around.

Some will just say it is an exhibition and play down the power shots, but remember when Tyson went on a 2006 exhibition tour with Corey ‘T Rex’ Sanders and he punched him so hard he had to hold his opponent up to stop him from hitting the deck?

If that’s the spirit of an exhibition then trauma is not far behind.

Nostalgia, however, garners powerful emotions. People my age (and above) will be curious. Not to see if either fighter can turn back the clock but to see what will actually happen. The unknown is a powerful allure in boxing, perhaps the most powerful, and that almost anything can happen means that, for many, Tyson-Jones will be an unmissable spectacle while for others there remains a very real moral argument to be had, but that’s an internal struggle we often feel as fight fans who often witness fighters sacrifice so much, and given that some have even made the ultimate sacrifice.

His will probably end up looking more like the exhibition match between Jack Johnson and Joe Jeannette when they were in their 60s/70s.

[QUOTE=Tatabanya;20913262]What's less moral, this pseudo-fight for charity - on paper, at least - or Muhammad Ali getting pushed by force on a ring vs a young Larry Holmes after he had failed a brain scan?[/QUOTE] Muhamed Ali wasn’t forced to…

Jones shouldn’t be a problem for any version of an in shape focused Tyson no matter what the rules are .

Once your brain has been damaged, the damage can only get worse. People who say 'Mike won't be eating the same sort of shots he took from H/Ws' or 'Roy will be too clever to take more than one big…