The event nobody thought would actually come off, will see a main event later tonight with boxing legends Mike Tyson and Roy Jones Jr. colliding in an eight round exhibition bout.

Their fight, which is taking place under modified rules with no headgear and two-minute rounds, will take place at Staples Center in Los Angeles.

Tyson, 54-years-old and an undisputed heavyweight champion, retired from the sport in 2005.

Jones, 51-years-old and a former four division champion, came in at 210-pounds. Jones has been far more active and last saw action in early 2018. 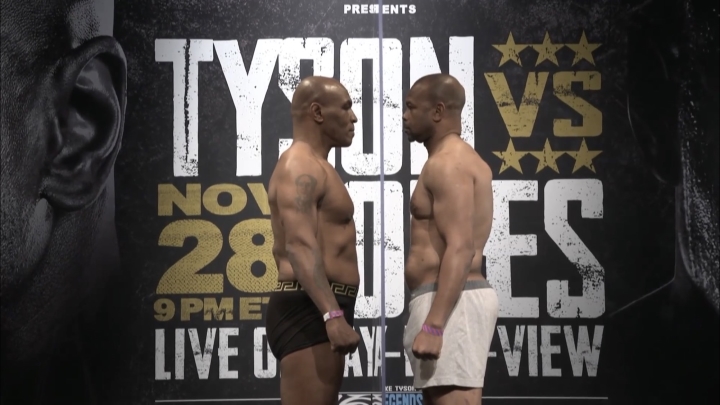 The California State Athletic Commission has spoken to both boxers and cautioned them about going out there to knock each other out.

Worried about the possibility of a serious in-ring injury, the CSAC is hoping the contest plays out in the manner of a hard sparring session.

However, Tyson is planning to take the fight to Jones from very first bell.

"I'm pitching punches and everything else is up to Roy. I'm coming at him. He doesn't have to worry about me. If I'm running anywhere - I'm running right at him," Tyson said.

While the CSAC will not provide any judges, the World Boxing Council will have three appointed officials scoring the fight. And there will be a winner announced at the end of the fight.

The contest will be carried on pay-per-view, with an undercard that features another exhibition clash with 23-year-old YouTube star Jake Paul taking on former NBA player Nate Robinson, 36-years-old.

RJJ jr didn't want any of Tyson when he had the chance and that staredown reminded him of why.But if he runs around for the first two minutes,Tyson'll be gassed and then he can potshot him.

[QUOTE=wileyhemi;20913659]It's sad an event this pathetic could generate enough interest to actually take place[/QUOTE] It says a lot about the state of star power in current boxing. The biggest name in boxing is a man who hasn't fought professionally in…

He will knock u out

Mike gave away his game plan... when the bell rings, he's running straight at him. Roy just needs to side step, hold the ropes open, and watch Mike dive headfirst out of the ring.

[QUOTE=sterling;20913082]Roy already looks terrified of Mike. You could see the fear in Roy's eyes at the weigh in. I think Roy has to really move with Mike because of his chin but the issue is i dont think Roy can…