The youngest heavyweight champion of all time detailed his use of a “whizzinator” in a conversation with Jeff Novitzky, the vice president of athlete health and performance for the UFC, ahead of his eight-round exhibition match with Roy Jones Jr. at the Staples Center in Los Angeles on Nov. 28.

The exhibition match will be sanctioned by the California State Athletic Commission, have thorough medical examinations and be replete with VADA performing the WBC’s Clean Boxing Program out of competition anti-doping testing for both fighters. 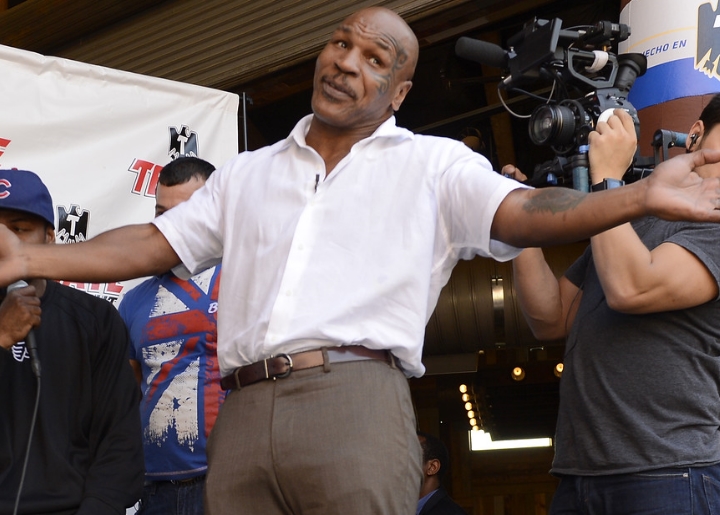 With a joint in hand, Tyson, who is the proprietor of the cannabis company Tyson Ranch and also uses the toad, a 5-Meo-DMT, dived deeper into his encounters with drug tests on his podcast “Hotboxin’ with Mike Tyson.”

“It was awesome, man,” said Tyson. “I put my baby’s urine in it. And sometimes, one time I was using my wife’s and my wife was like, ‘baby you better not hope that it comes back pregnant or something.’ And I said nah, so we ain’t gonna use you any more, we’re gonna use the kid. Cuz I got scared that the piss might come back pregnant.”

The drug czar Novitzky responded: “I think that’s happened before. A male provided a urine sample and it came back and they said ‘Sir, you’re pregnant. Either you’re pregnant or this is somebody else’s urine.’”

Novitzky asked: “Did you have the right color whizzinator? Because there was that NFL guy last season with a white one.”

Exactly what Tyson was trying to dodge, and during what time of his life, was left unknown. The 54-year-old Tyson has vividly detailed his cocaine and marijuana use throughout his life. He never tested positive for performance-enhancing drugs, and Tyson has previously said he’s never used PEDs.

In the 2013 book “Undisputed,” Tyson said he used a whizzinator throughout his entire career to get away cocaine and marijuana use.

Tyson tested positive for marijuana after he made Andrew Golota quit in two rounds in 2000. Before the fight, Tyson refused to submit to a urine test and was fined $5,000. The fight was later switched to a no contest, and Tyson was forced to pay $200,000 to various charities.

On the RJJ Boxing show last month, Jones said: “I hope [Tyson] passes the test, because without the test we can’t fight, but even if he didn’t pass the test, Roy would still fight.”

Tyson has credited his physical transformation of late to a vegan diet, cardio and stem cell therapy.

I'm a huge Mike Tyson fan but if you don't believe that he was using all kinds of gear and then some throughout his career, you have no idea about athletics. All these fighters were 100% geared up until the…

[QUOTE=SKARY LARRY;20879606]Why would any person bring that up? A real idiot. His record should be cancelled as he had an unfair advantage! CHEATER![/QUOTE] Agree with this 100%!

Tyson is a disgraceful rapist.

Why would any person bring that up? A real idiot. His record should be cancelled as he had an unfair advantage! CHEATER!

Most posters won’t realize that such a title, if it were for a regular black man, would create serious implications and would’ve made great headlines for Trump’s party. But of course because it’s Mike Tyson, or that he raped a…