Mike Lee: We've Had A Long Time To Prepare For Caleb Plant

Aside from how he will handle the considerable leap in competition, the biggest question mark surrounding Mike Lee’s challenge of Caleb Plant’s super middleweight title is how he will manage to get down to a weight at which he’s never previously fought.

Luckily for the unbeaten Chicagoan, he’s had plenty of time to prepare for the latter part.

“We’ve known about this fight for a while,” Lee (21-0, 11KOs) noted during a recent media conference call to discuss the upcoming title fight, which takes place July 20 live on Fox from MGM Grand Garden Arena in Las Vegas, Nev. “It wasn’t like we got a phone call out of the blue four or six weeks ago saying this fight was available.

“We’ve had a long time to prepare for this title fight.” 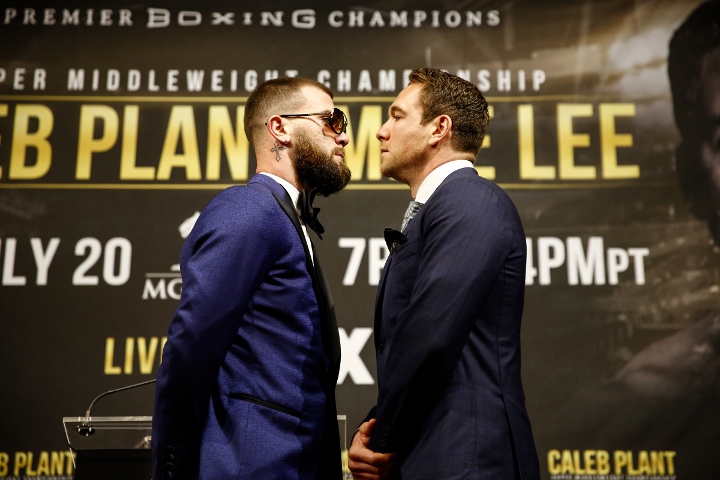 Lee—who holds a bachelor’s degree in Finance upon graduating from the University of Notre Dame—has spent all nine years as a pro at or just above the 175-pound light heavyweight division, facing middling competition for the most part. His claim to fame thus far—aside from his academic background—is having served as a spokesperson for Subway® fast-food franchise early in his pro career.

Competition level notwithstanding, the unbeaten 32-year old has established himself as a significant box-office draw in the greater Chicago area. So much, that his hometown was on the short list of potential destinations for his first career title fight as well as Plant’s first defense of the belt he claimed in a 12-round win over Jose Uzcategui this past January.

The bout eventually landed in Las Vegas, atop a Fox telecast that will serve as a lead-in to the stacked Fox Sports Pay-Per-View card at the same venue. Headlining the show, unbeaten welterweight titlist Keith Thurman defends his belt versus legendary former eight-division champ Manny Pacquiao.

Lee has served on the undercard of plenty of big events before, including his last fight in Las Vegas nearly seven years ago. He weighed a then-career lightest 174 pounds for a four-round win in supporting capacity to then-World middleweight champion Sergio Martinez’s conquering of previously unbeaten Julio Cesar Chavez Jr.

Only twice since then has Lee weighed less than 175 pounds, never lighter than 173 which was his weight for a Sept. 2016 regional title win in his Chicago hometown. Still, a big fight one division south has always been on his radar—and naturally jumped at the chance to face Plant (18-0, 10KOs) for a major title on the biggest show of 2019 to date.

“My team have been talking about fighting at super middleweight for a big opportunity for a while,” notes Lee. “I knew I can bring my power down to this weight class and rehydrate the right way. When an opportunity like this comes your way, you don’t turn it down.”

The fight was actually agreed to earlier this year, with all parties involved waiting on a fight date. While frustrating to most, it has actually worked to the challenger’s advantage in regards to making weight the right way.

“We had the luxury of coming into camp into shape,” points out Lee. “So, this camp wasn’t about trying to lose weight, just going straight to working on a game plan and establishing a fighting rhythm.”

[QUOTE=BIGPOPPAPUMP;19880758]Aside from how he will handle the considerable leap in competition, the biggest question mark surrounding Mike Lee's challenge of Caleb Plant's super middleweight title is how he will manage to get down to a weight at which he's never…

Just because time was on your side doesn't mean the outcome will be any different. Hoping for a competitive fight but Lee looks outclassed in this one!

"His claim to fame thus far—aside from his academic background—is having served as a spokesperson for Subway," compared to the writer claim to fame of "writing this article."

This fight should have been in Chicago. Or at least in Nashville. PBC dropped the ball again when it comes to spreading boxing's popularity outside the same old cities. This was a missed opportunity.