Vito Mielnicki Jr. will have to wait a little longer—nine months, to be exact—to take his act west to California.

The unbeaten welterweight rookie boldly announced through his social media channels his plans to appear on the undercard of the Sept. 28 Fox Sports Pay-Per-View headliner between welterweight titlists Errol Spence and Shawn Porter.

It was to mark his second career pro fight, having made a huge splash in his pro debut this past July in Newark, New Jersey, near his Roseland hometown and where he personally sold more than 1,000 tickets for the ESPN-televised card. 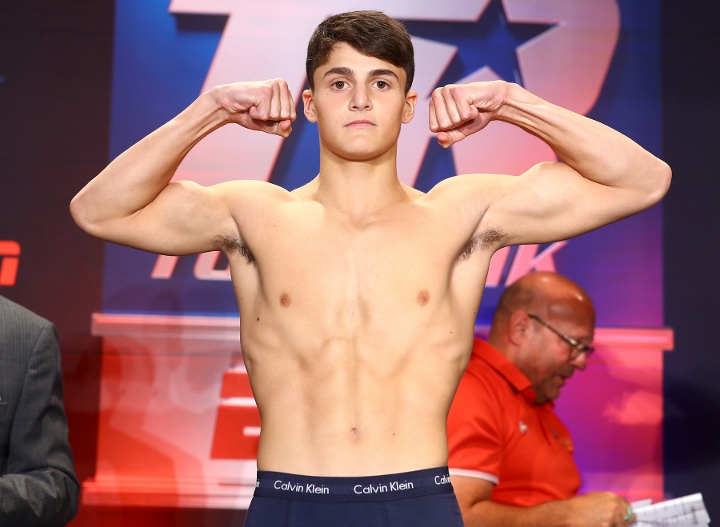 In order to fight on the card, Mielnicki Jr. (1-0, 1KO) had to gain direct approval from New Jersey boxing commission Larry Hazzard Sr., given he is only 17 years old in a state which carries the minimum age of 18 in order to compete professionally in combat sports.

For the moment, it doesn’t appear that any such love will make its way that far west in time to preserve his place on the card.

“In California, a boxer must be 18 years old (to participate), Andy Foster, executive director of the California State Athletic Commission reminded BoxingScene.com of the state’s general rule, declining comment as to how it will impact Mielnicki’s application to box in California.

“Consistent with Section 18640, the commission shall have jurisdiction over all forms and combinations of forms of full contact martial arts contests involving participants 18 years of age or younger.”

Mielnicki announced his having signed with Premier Boxing Champions (PBC) earlier this month, ready to make a splash right out the gate. As Texas, Nevada and now New Jersey are currently the only U.S. states where a boxer can compete at the age of 17 years or slightly younger, it appears the incoming high school senior will be able to spend more time focusing on his studies in the meantime.

Who gives a flying F%*K! Let him stay in Brooklyn where he belongs, plenty of west coast talent to enjoy.

He can always fight in Tijuana meanwhile...