Middleweight: While The Champ is Away…

There are lots of belts around but at the moment there is only true one middleweight champion of the world.

For the rest of 2019, the champ is busy with other business.

In November, Saul Alvarez (52-1-2, 35 KO) will make the relatively rare step of moving up as the reigning king at 160 lbs. to challenge for a light heavyweight belt. Alvarez will face WBO light heavyweight titlist Sergey Kovalev (34-3-1, 29 KO) in a fascinating contest. It’s arguably the biggest fight on the calendar for the rest of the year.

For the rest of the middleweight division, business carries on. Everyone from 154 lbs. through light heavyweight would likely clear their calendar if Alvarez came calling. When the champ is away, there are other fights to be made and other belts to be defended.

Alvarez, the lineal king of the division, is still holding on to the WBA strap (sooooper variety) along with whatever foolishness a franchise tag from the WBC means. The WBC belt at 160 lbs. now resides with Jermall Charlo (29-0, 21 KO), the WBO belt with Demetrius Andrade (28-0, 17 KO), and Alvarez was forced to give up the IBF belt on the line in a few days.

This Saturday (DAZN, 7 PM EST), Gennady Golovkin (39-1-1, 35 KO) makes his second start since losing his WBC, WBA to Alvarez last year. He will face Sergey Derevyanchenko (13-1, 10 KO) to gain back another piece of lost hardware, ironically having had to give up the IBF belt when he didn’t face Derevyanchenko last year.

This wasn’t the fight Golovkin was hoping for. The Kazakh knockout artist, after a debated draw and closely contested first defeat to Alvarez, wanted one more bite at the biggest apple around.

For now, it wasn’t to be. It might not be again if Alvarez has his way. Multiple reports in recent months indicate Alvarez’s personal dislike of Golovkin could preclude a third fight. Things can change. For now, Golovkin-Derevyanchenko is all either man can worry about.

Saturday’s is a solid match. Derevyanchenko fought well in a losing effort for the IBF belt last year against Daniel Jacobs and, in Golovkin, has an aging fighter who will be there to be hit. Golovkin is expected to win but the underdog is live.

What remains to be seen is how live the middleweight division will be while Alvarez is otherwise engaged and upon the occasion of his return. While Alvarez, with a win in November, could always opt to stay up the scale his frame is probably always going to be better suited for the middleweights on a more regular basis.

Alvarez might be everyone’s biggest fight. He isn’t anyone’s only fight. 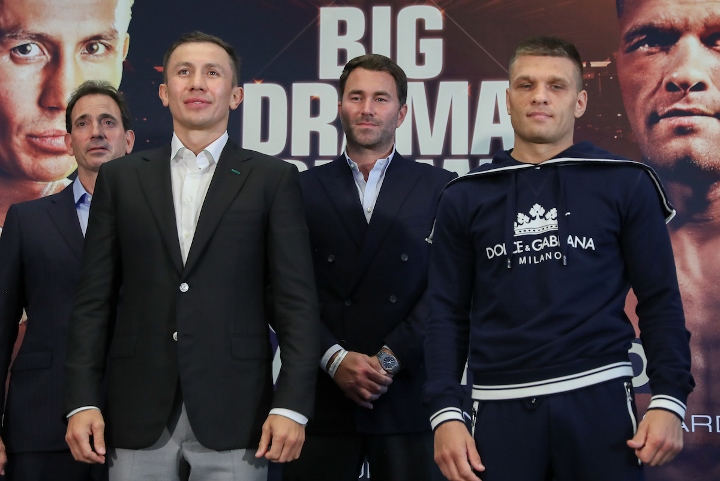 DAZN continues to hold the keys to a lot of the field at middleweight. Along with Golovkin and Alvarez, they have also been airing the career of Andrade. Andrade, a 2008 US Olympian and two-division beltholder, has hovered quietly around the fringes of the title scene for several years. He’s still waiting for his big break.

With so many belts around, including a plethora of WBA belts per class in multiple divisions, the clutter has made the accomplishment of winning one less remarkable than ever. At least Andrade can say he’s the only WBO beltholder and that belt keeps him on air and in more demand than he might be without it.

It doesn’t guarantee a big fight. If Alvarez isn’t available to Golovkin or Andrade in the immediate future, and an exacting win or loss versus Kovalev could mean a tune-up defense that takes the division well into 2020, wouldn’t they make sense together?

It was guffawed by some when Team Alvarez suggested Golovkin should go win a belt back before they’d consider fighting him again. Given the current game board, wouldn’t the winner of Golovkin-Derevyanchenko help their case by unifying against Andrade while they wait and hope?

If not, could business be done across aisles? The PBC-affiliated Charlo is in a position similar to where welterweight Terence Crawford is under the Top Rank umbrella. They’re talented and isolated to some degree by the business of boxing, their best hopes for big fights right now likely coming from a division below if the in-house chips fall right.

Golovkin, who made the case as the avoided terror for years, is now in a position where, if he wins this Saturday, he can make sure others don’t have to make the same case. Golovkin-Andrade might be easier business to get done. Golovkin-Charlo could be one of the more exciting fights in the sport. Both look for knockouts and Charlo has a personality that could elevate a promotion if introduced to a larger stage.

Conversely, if Derevyanchenko wins this weekend he could make a new, compelling foe in unification fights or finds himself in a second scrap with Golovkin. If the latter occurred, Andrade and Charlo could do worse than looking to each other where no other quality, career-enhancing win might be found.

These are all better case scenarios. All could just as easily sit still, rack up defenses against others, and hope Alvarez eventually looks their way. It wouldn’t be unusual.

It would be a lot less fun.

While the champ is away, there are a lot of other good fights that can be in play. Let’s hope we get one of them this Saturday.

The Canelo/Kovalev is a good fight that I'm looking forward to but the odds are what they are for a reason. The odds on Canelo/Golovkin 3, if it happened now, would be a lot closer to even money.

"It’s arguably the biggest fight on the calendar for the rest of the year." Ruiz vs AJ II is bigger imho.

Hell, aint gonna be a walk in the park for GGG. Just watch, The Technician will push the kazahk to the limit. The winner: GGG (but barely).

[QUOTE=tokon;20098416]The winner of GGG-Derev going against andrade makes perfect business sense. It would also be difficult for Alvarez to not fight whoever came out if that holding IBF & WBO titles for a massive 160 unification. If GGG really wants…