Michael Conlan – Not All Fights Take Place in The Ring

4,500. The estimated number of suicides in Northern Ireland since the Good Friday agreement in 1998 that put an end to the Troubles, which took an estimated 3,600 lives between 1969 and 1997.

Featherweight contender Michael Conlan was born in 1991, young enough to see the end of the conflict in his hometown, and soon old enough to witness its aftermath.

“In the north of Ireland, there’s more deaths by suicide per year than there are deaths by road accidents,” he said. “Since the Good Friday agreement in 1998, there’s been more deaths since then by suicide than people dying during the Troubles. I’ve seen this all my life, growing up. So many friends and people I know have committed suicide. A lot of young kids, and it’s like a domino effect. When one person does it, more people do it.”

It had become an accepted part of life in West Belfast, along with poverty, drug use, and a rising crime rate. Conlan was one of the lucky ones, kept in line by his family and able to find a way out of any of the aforementioned situations by his talent for using his fists in the ring.

That talent led him to a World amateur championship, two Olympic appearances and a bronze medal in the 2012 Games. And as a professional, the 28-year-old father of two has raced out to a perfect 13-0 (7 KOs) record and a spot in the rankings of all four major sanctioning bodies.

But in January, shortly before his March 17 bout against Belmar Preciado was made official, the suicide of 11-year-old boxer Cillian Draine hit Conlan harder than anything he had taken in the ring as a pro, and upon deeper investigation, he found out how woefully unprepared Northern Ireland is for such a serious health crisis.

“If you walked into a hospital and tell them, ‘Listen, I’m gonna kill myself,’ they’ll send you away and give you a card to see a professional, but that professional will not be able to see you for seven months,” said Conlan. “So you’re basically a dead man walking.”

Or woman. Or child. It’s hard to fathom so much despair and death in one fairly small community, but if you’re looking for reasons, years of conflict and trauma have clearly left their mark.

“It’s a lot of things,” said Conlan. “There’s obviously post-traumatic stress feeding down through families from the Troubles and it got bigger and bigger and bigger with more deaths each year. That’s partly something to do with it. Maybe the poverty, the healthcare, there are so many reasons why that it’s very hard to pinpoint one. It’s a scary thing. Northern Ireland has a population of 1.8 million people and 307 of those people killed themselves in 2018.” 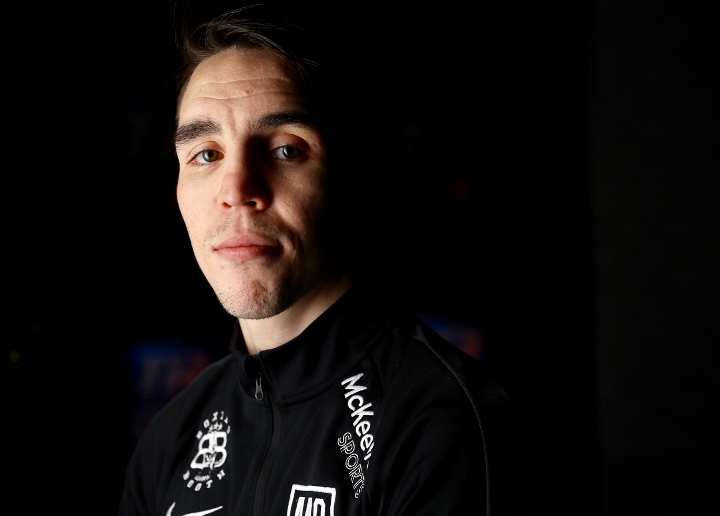 Feeling bad is one thing, trying to do something about it is another, and Conlan sprung into action, setting up charity auctions for the family of Cillian Draine and then organizing an open letter signed by several notable figures asking primarily for more funding for mental health charities and a reduction in the waiting time to be seen by a mental health professional.

Once the letter was circulated, I asked Conlan if there was positive movement.

“Not really,” he said. “As politicians do, they dance around the question and don’t give solid answers. I’ve called them out on numerous occasions and on live TV, but what they’ve done was set up a group to tackle mental health. But when people set up a group, it’s not like they’re doing something. They’re setting up a group to ask questions and maybe try to get things done, but they’re not actually trying to get it done because the health minister (Robin Swann), if he reads the letter and sees the demands that have been asked for, with a click of his fingers he can change these things. I think in the health budget, it’s between three and four percent that they spend on mental health, whereas other parts of the UK spend 12 percent. It’s terrible and something that can be fixed and prevented.”

Mick Conlan didn’t get to fight in New York City on March 17, his annual headlining appearance in the Big Apple called off due to the COVID-19 outbreak. That’s okay, once the world gets back to normal, he’ll get back in the ring and pick up on his plan for this to be the biggest year of his career.

That’s in the ring. Outside it, there are worldwide health issues to deal with and a new way of life, at least for the time being. But there’s still a fight to be had, and Conlan’s not done fighting it.

“I’ve seen the effects on the people left behind,” he said. “I broke down crying once or twice in front of the families I was talking to because it does really break my heart seeing my people affected the way they’ve been affected. It’s one of the most heart-wrenching things you’ll see.”

Conlan doesn’t want to see it anymore. Not just for the people of Northern Ireland he doesn’t know, but for the ones he does, mainly his two little ones at home. Thanks to their father’s notoriety, they won’t live the same lives as those struggling day-to-day in West Belfast. But their friends might, and through social media and the media, they will be exposed to such tragedies if help isn’t given to those who need it.

“It’s a vicious cycle which is very hard to break and that’s what I’m trying to do – I’m trying to break that cycle for the next generation,” said Conlan. “I have young kids myself and to see my kids seeing this kind of thing, it’s kind of normalized. It’s happened so much and then they have the big funerals and stuff, because they’re young kids and they’ve got all the friends and families who want to show support, but at the same time it kind of glamorizes it and I don’t like that.”

So he’s doing something about it, proving once more that champions don’t always have gold belts.

Life in too many parts of working is honestly heartbreaking to witnes. I am fortunate to travel to tens of countries. The biggest challenge is to get people committed in holding their political leaders accountable, because the political elite effectively…