Menayothin vs. Fukuhara Rematch Rescheduled For May 24

The moving target that has become Wanheng Menayothin’s next title defense appears to have finally landed on a firm date and home.

The unbeaten strawweight titlist from Thailand is officially set for his title fight rematch with Japan’s Tatsuya Fukuhara. Their bout will take place on May 24 in Chenburi, Thailand.

Menayothin (52-0, 18KOs/birth name Chayaphon Moonsri) will attempt the 11th defense of the strawweight title he claimed in a 9th round stoppage of Mexico’s Oswaldo Novoa in Nov. ’14. Included among the lot was a Nov. ’17 decision win over Fukuhara. 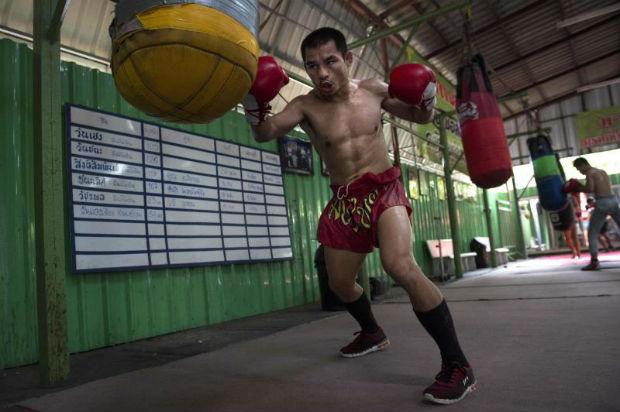 The 33-year old Thai boxer has since gained cult-level boxing fame, surpassing the legendary Floyd Mayweather’s perfect 50-0 ring record with a 12-round decision victory over Pedro Taduran last August. It served as the last title defense recorded by Menayothin, who returned less than three months later in a non-title win over upside down journeyman Mektison Marganti last November in Thailand, where all 52 career bouts have taken place.

While his 52-0 record is the longest active streak without a loss or draw by any titlist, Menayothin still has a long way to go before making strawweight history. Even with a win in May, he will only be halfway to the all-time divisional mark established by Ricardo Lopez, the legendary Hall of Famer from Mexico who racked up 21 defenses during a title reign which bridged nearly the entirety of the 1990s.

Lopez—who officially retired in 2002 with a record of 51-0-1 (38KOs)—was also the last true lineal champion, at strawweight, having wiped out the division before moving up to capture a 108-pound title in 1999.

Menayothin hasn’t come close to dominating the division. In fact, despite his lofty record and lengthy reign, it’s debatable as to whether he’s even the best strawweight titlist in his own country. Fellow unbeaten titlist Knockout CP Freshmart (19-0, 7KOs) has fewer defenses (excluding his stay as an interim titlist) but boasts the far stronger résumé, including wins over Byron Rojas (twice), Carlos Buitrago and a resurgent Rey Loreto.

One mark within reach for the long-reigning beltholder is that of the most successful strawweight title defenses by a Thai boxer. He’s two away from matching the mark of Ratanapol Sor Vorapin, a two-time 105-pound titlist in the Ricardo Lopez era who managed 18 defenses between his two reigns, including 12 in his first stint before conceding the belt at the scales.

It figures to be an attainable mark for Menayothin as long as upcoming fights such as his next ring date continue to surface. Fukuhara (21-6-6, 7KOs) hadn’t done much to land his first title fight, nor has his pair of wins since then raised the illusion of the Japanese southpaw—who turns 30 in May—pulling off the upset.

As it relates to this challenge, the toughest task for Menayothin and his handlers thus far has been securing a date for the fight. Tuesday’s announcement served as the fourth confirmed date attached to this event, which was initially due to take place March 1 before getting pushed back to March 29 and April 24, with nothing more than local promotional issues cited as the cause for the continued  delays.

If I was Menayothin I would retire the moment they put me in with a live opponent :)