Rochester, New York - It was a dull affair until it wasn’t.

Taking advantage of a major televised platform again, 27-year old lightweight Mason Menard (32-1, 24 KO), 134 ½, of Rayne, Louisiana, scored a stoppage in round nine after a slow start against 29-year old Uzbek Bahodir Mamadjonov (19-3, 11 KO), 135, of Houston, Texas. Menard turned the fight starkly with two knockdowns in the seventh and never looked back. The referee was Steve Smoger.

Menard made it happen with body shots after being frustrated early by the boxing of his foe. Digging to the body, he dropped Mamadjonov near the corner in the seventh and had him down again before the round was over. In the ninth, Menard let loose a nasty two-fisted assault, Smoger stepping in to save Mamadjonov as he went to the floor at 2:26 of the ninth. 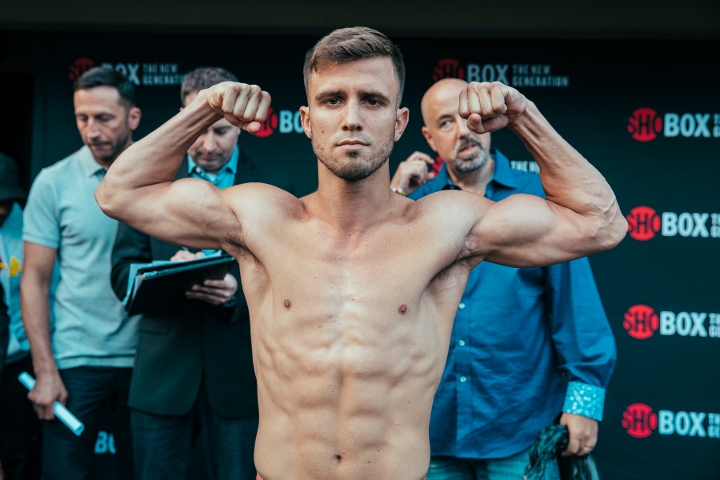 Menard’s lone loss came in the first round of his third professional contest in 2008.

In bantamweight action, undefeated Antonio Nieves stayed that way but only by chance of a single point, landing on a draw verdict.

The 29-year old Nieves (16-0-2, 8 KO), 117, of Cleveland, Ohio, couldn’t quite solve the aggressive effort of 20-year old Alejandro Santiago (11-2-2, 3 KO), 117 ½, of Tijuana, Mexico. Santiago pressed and got in his shots but didn’t seem to have the power to make a definitive move against the straight shooting Nieves. Scores came in with each man getting a 96-94 nod and the third judge splitting the difference at 95-95. The referee was Charlie Fitch.

29-year old Kazakh welterweight Bakhtiar Eyubov (11-0, 10 KO), 142 ½, of Houston, Texas, was taken past the third round, all the way through a scheduled ten for the first time, just barely hanging onto his unbeaten mark with a split decision win over 35-year old Karim Mayfield (19-4-1, 11 KO), 142 ¾, of San Francisco, California. The referee was Michael Griffin.

Eyubov brought the pressure for most of the night and early that meant some eye-catching shots. As the fight wore on, his pressure meant more countering opportunities for Mayfield who, while rocked occasionally, stayed right there with the younger man. With a little more luck with the judges in a fight full of close rounds, a point deduction for a low blow against Eyubov might have mattered greatly. As it was, it simply kept the scores closer. Scores came in at 95-94 across the board with one of those tallies going to Mayfield and the other two to Eyubov.

The loss was Mayfield’s fourth in his last five fights.

The card was televised in the US on Showtime as part of its ShoBox series, promoted by Greg Cohen Promotions and Salita Promotions.

I had Santiago easily winning 8-2 in rds. I did not give Nieve's a rd after the 4th.

Menard, Comey, and Easter could be the most exciting comers in the division and could produce fireworks starting with Easter vs Comey coming soon.

Damn these fixed fights!! Santiago dominated Nieves!!!! Mayfield boxed the ears off of an ape with gloves!! They will do anything to protect the unbeaten fighters records!!! Santiago and Mayfield clearly won these fights tonight!!