Both men have filed lawsuits against each other.

Frampton is pursing millions in damages over monies owed, while McGuigan claims the boxer breached his contract by jumping ship to Frank Warren and Top Rank. Both men have denied any wrongdoing.

They split in August of 2017 after working together for eight years. 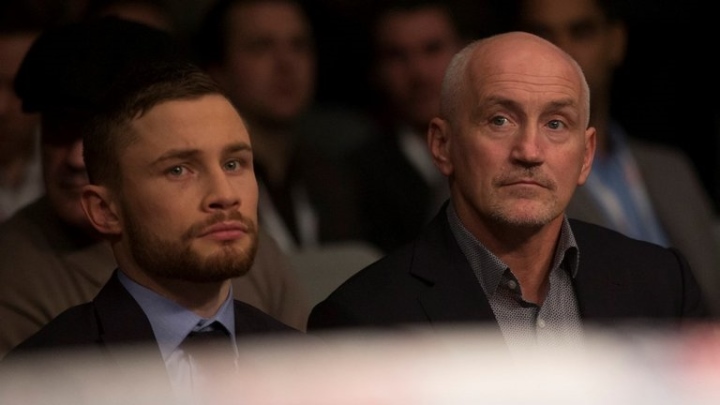 On Tuesday at the Belfast High Court, McGuigan's attorney challenged Frampton on the links between his managers, MTK Global, and Daniel Kinahan, who is alleged to be involved in organized crime.

According to BBC News North Ireland, McGuigan's lawyer questioned the boxer on the allegation that MTK Global is a front for a criminal organization.

"I'm not aware of that," Frampton responded.

And then the attorney directly mentioned Kinahan's involvement in MTK and advised the court that Kinahan is suspected of being a "crime boss".

"I've heard the stories," said Frampton. "I don't suspect anything."

He would later add: "I don't make judgements. Do you believe everything you read in the papers?"

While Kinahan has no convictions, a judge named him in a Dublin court as being a senior figure in Irish organized crime.

This past May, MTK Global issued a statement to clarify that Kinahan was no longer a part of their business.

However, the management group did confirm Kinahan's role in advising several of their fighters.

In June, Kinahan reportedly stepped away from the sport after generating controversy by being directly involved in the negotiations for a Tyson Fury vs. Anthony Joshua unification. Kinahan is a close friend and adviser to Fury.

[QUOTE=Al Broker;20762949]Doesn’t Fury and his family root for Kinahan?[/QUOTE] In the article: [QUOTE]In June, Kinahan reportedly stepped away from the sport after generating controversy by being directly involved in the negotiations for a Tyson Fury vs. Anthony Joshua unification. [B]Kinahan…

A good advert for up and coming boxers not to get involved with McGuigan. All the family is on the payroll, no wonder Taylor walked away too.

McGuigan really dirtying his own name here. He clearly made a lot of money off of Frampton's back. Why not let him see out the rest of his career in peace? This whole charade makes McGuigan look bad

This was always going to get messy.