McGregor: This is NOT Even Close To My Toughest Challenge Ever

Combat sports and TV experts say the Connor McGregor-Floyd Mayweather fight should be the biggest pay-per-view event in history with more than 50 million watching in the U.S.

Saturday night's fight threatens the pay-per-view revenue record set by Mayweather and Manny Pacquiao two years ago. McGregor's UFC fans and the curious drawn by his trash-talking could help this event dwarf the overall viewership record, as people use the fight as a reason to have friends and family over for an hour of escapism.

The fight will also be seen by millions more worldwide, with promoters claiming it will be available either online or on a TV screen to more than 1 billion homes in 200 different countries. 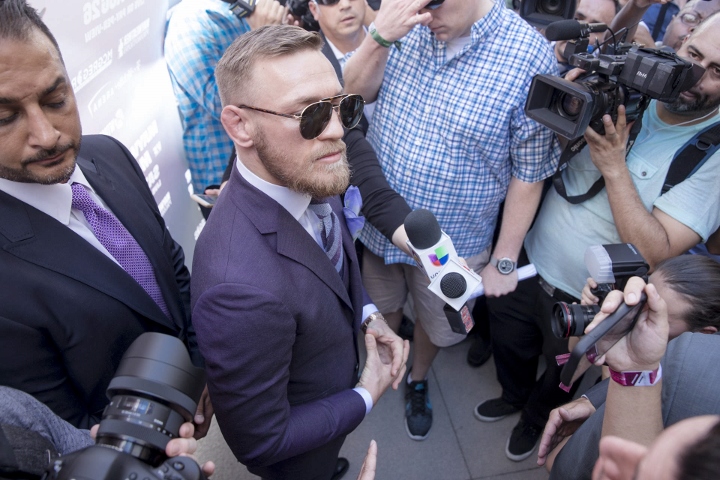 McGregor, a massive underdog in what will be his first professional boxing fight, insisted Tuesday he was ready to stun the oddsmakers.

"This is not even close to my toughest challenge ever. I will crumble him," McGregor said.

McGregor and Mayweather passed each other after their separate introductions, with McGregor taunting the American with a shout of "Why didn't you want to face off?" -- triggering a melee between their two entourages.

A relaxed-looking Mayweather meanwhile had earlier encouraged fans to bet on the fight finishing inside 12 rounds.

McGregor, 29, last week insisted he was in peak condition following a gruelling training camp that had taken him to "hell and back" and left him primed to face either a long or short fight.

"There is no way in hell that I'm not ready to fight in the deepest of trenches in this contest," McGregor said.

"We are ready for both scenarios. I'm ready to go to war for 12 rounds and I'm ready to put him away early on."

Floyd Mayweather vs. Conor McGregor is a 12-round super welterweight matchup that pits the legendary boxer Mayweather against the all-time MMA great McGregor in the main event of an unprecedented four-fight pay-per-view boxing event.  Mayweather vs. McGregor will take place Saturday, Aug. 26 at 9 p.m. ET/6 p.m. PT at T-Mobile Arena in Las Vegas.  The event is produced and distributed live by SHOWTIME PPV, promoted by Mayweather Promotions and sponsored by Corona.

not yet obviously since you already lost in your own game lol...at least you got a good excuse tho i give you that

[QUOTE=IronDanHamza;17973692]Man, seriously are you retarded? Are you allowed on the computer? People want McGregor to get destroyed because he has come into our sport as a novice and shown total disrespect. Call's it "easy" "safe" and "half a fight" That's…

[QUOTE=Evil_Meat;17973995]Ohhh sh1t you got me there bro. I actually mentioned that to give people a laugh - I was empathizing with Khan because right at the same time this ***** I had coming over to fvck bailed last minute for…

youre getting seriously hurt on saturday night, youre going to be a laughing stock. the mcgregor aura dies forever.

McGregor talking a lot again, and getting agitated. Saying a lot of nonsense and getting emotional. Like before, with everything he says, it just sounds like he's trying to convince himself. Where Floyd at? Oh yeah, being totally chilled.