McDermott Still Feel Strongly That He Beat Tyson Fury in 2009

John McDermott is still positive that he did enough to beat a young, up and coming, Tyson Fury, when they met for the first time in 2009.

There were numerous observers who felt McDermott may have done enough to pull out a decision win, with the wide score in Fury's favor creating a lot of controversy. 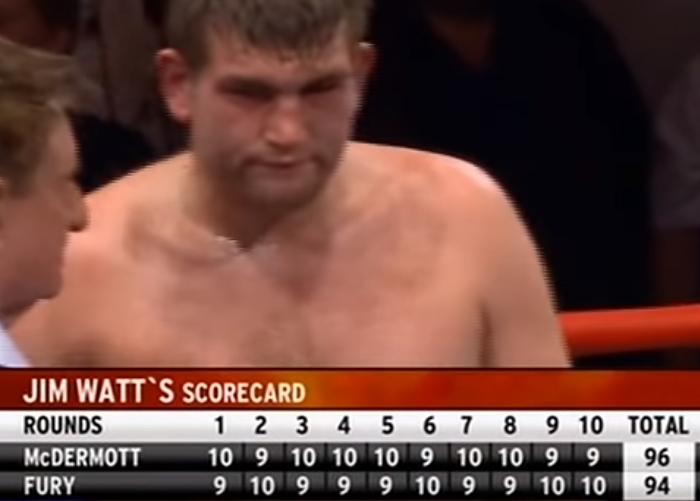 Now McDermott is working a regular job, while Fury is regarded by many as the best heavyweight in the sport.

"Of course it still annoys me," McDermott told Sky Sports. "I'm not saying I would have gone onto fight for the world title but it would have helped me, at the time. A bit more money when there wasn't much money in boxing. He's a millionaire now and I'm struggling."

At the time, Fury was only 21-years-old with a seven fight win streak. McDermott had already banked 30 fights on his record, and lost back to back fights coming in.

"They thought I'd be an easy fight. They didn't think I could dig deep," McDermott says. "I remember walking up to the punch bag and my trainer drew a line at 6'9'' and said: 'This is how tall Tyson Fury is'. I remember thinking: 'How am I going to hit the bloke?'

"I thought the judges were scoring it. But people were booing and I saw the referee holding Fury's hand up. It's just madness, I don't know what happened. How can he score it 8-2?

"One thing I'll say about Fury - he's got plenty of bottle and heart. To box me in his eighth fight? I knew then that he was special. He was just a boy but has improved tenfold since then. He's so awkward - big, unorthodox, strong guy but he can't hit very well. He fought his heart out and I gave my all. I was in bed for three days after, knackered."

"Fury's father said to me in the car park: 'My boy didn't deserve that, he was very lucky,'" Hussein said.

"People don't know this - Fury came to my gym many years later with his uncle Peter. He put his hands together like he was praying and told me: 'Thank god McDermott left you for the rematch.'"

Fury closed the book on the first contest, when he stopped McDermott in the ninth round of their rematch in 2010.

TBF if Jim Watt had it for McDermott then Fury must have won.

[QUOTE=The D3vil;20490388]Yeah, from what I've heard like some of the judges lost their jobs due to that decision.[/QUOTE] Terry O’Connor has gone on to disgrace many other scorecards.

Yeah, from what I've heard like some of the judges lost their jobs due to that decision.

What I remember from this fight is Gypsy-John telling McDermott that he whooped Tyson. A shame that the Gypsy-Bum never honestly avenged his loss, and like always, had to manipulate the gloves in their BBBofC forced rematch ( due to…

This is what I was saying to people complaining they thought Fury won the first Wilder fight - Fury was lucky to not get DQ'd against Cunningham and McDermott beat him. If you want to reverse that Wilder fight you…