It was only a couple weeks after Jessica McCaskill introduced herself to the world, and her manager / coach Rick Ramos was with her in Las Vegas, ready to make sure her stay among the boxing elite was going to be a permanent one, and not just a 15 minutes of fame deal.

So as Holly Holm and Cris Cyborg prepared to battle it out in the main event of UFC 219 on December 30, 2017, McCaskill and Ramos worked the room at T-Mobile Arena.

“Rick, being the manager that he is, he's facilitating different meetings with different people and different promoters,” McCaskill recalled. “He’d say, ‘So and so is at this section in this seat - go say hello, get a picture.’”

The St. Louis native and Chicago resident had suffered the second loss of her seven-fight pro boxing career on December 13, but after coming out of nowhere to push Katie Taylor for ten rounds in their WBA lightweight title fight, “CasKilla” wasn’t on the “dismiss” list. She had arrived, and she had plenty of targets in her sights. One of them was a young lady with all the belts at 147 pounds, two weight classes above her, Cecilia Braekhus.

A photo op was arranged, and the two stood next to each other for the shot.

Braekhus raised her fist, as one does in such situations. McCaskill began to raise her fist, then put it back down.

“It's the fighter pose,” she said. “Then I thought to myself, I don't want them to be able to size up my hands with her because one day we could fight, and I've got big hands. So I put my hand down. I wanted to keep that in the bank, just in case.”

“There was a picture I took with one of Rick's other fighters that he used to manage back in the day and we both had our fists up and all they kept saying was, 'Wow, her hands are so much bigger than his.' So that stuck in the back of my head, I guess.”

She kept that fist in the bank for photo ops, but she brought them out in the ring. Ten months after the loss to Taylor, McCaskill returned as a junior welterweight and won her first world title, beating a member of the women’s pound-for-pound list, Erica Anabella Farias, for the WBC crown. She would beat Farias again in 2019, sandwiching the victory with another one over Anahi Ester Sanchez that earned her another 140-pound belt. 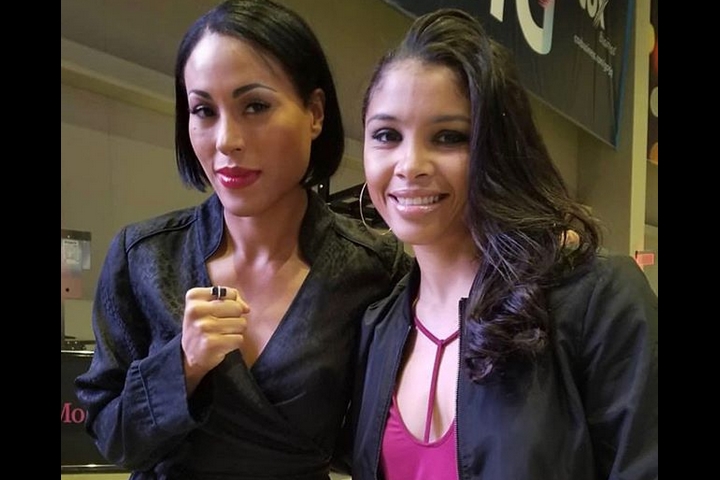 And now…she will meet Braekhus again, this time with both fists up.

“It's finally coming to fruition,” said McCaskill of Saturday’s main event in Tulsa, a fight that will take her to a new level should she dethrone the undisputed welterweight champion and put a “1” in her loss column. That’s career and life-changing stuff for the 35-year-old, who is ready for anything come the morning of August 16.

“You just sit back and hold on and let things happen and just make sure you're staying with it while it's happening,” she said of life after Saturday night. “I know it's gonna change and things are gonna be different, but I'm prepared for that. I think I have a great team to help me stay stable and focused and prioritize be smart about who to let in and the things we say yes and no too. But it's gonna be wild, I know that.”

Despite the fact that McCaskill started her career at 132 ¾ pounds in 2015, she insists that moving up to challenge for welterweight gold is “not an issue at all,” noting that she fought at 152 and 141 pounds as an amateur before ultimately winning a pair of belts at 140. What some wonder is if the challenger in the DAZN main event can beat someone like Braekhus while still working a full-time gig as a Regulatory Reporting Analyst for brokerage firm R.J. O’Brien & Associates.

Yeah, not what you usually hear about someone competing in one of the biggest title fights of 2020.

“I work from the gym, so I have a little table that I set up at 6am every morning and just pull out my laptop and my computer screens and hook it up and start working,” said McCaskill, who also teaches classes at the gym, sees clients for personal training, and has a growing online business at TeamMcCaskill.com. In other words, if it ain’t broke, don’t fix it.

“I just need to stay busy because I get bored easy,” said McCaskill, who, despite her other interests and responsibilities, is all-in on her quest for victory this weekend. This isn’t just another fistfight; this one has history attached to it, and McCaskill can’t wait to be the one making it.

“History is something that we definitely are chasing,” she said. “We're chasing belts, we're chasing history. I win this fight, I am in the Hall of Fame. That's fact and that's something important. I'm not doing this for kicks and giggles. I sacrificed too much for this to be a hobby. I probably put in the same amount of time or more with this job as I do with my corporate job, so everything little thing is important.”

“I want to make sure that people understand how we're doing this business and that females can come up and take it to the next level once I'm finished,” McCaskill continues. “I'm making my mark so that people know what I've done and what I've accomplished. If I have kids one day, they can look back and see this. It's all very important. This is something that you risk your life to do, and unfortunately we've seen way too many people lose their lives in this sport, so it's not taken lightly at all.”

Absolutely not. From traveling to England to face Taylor with just six pro fights, to winning a pair of world titles to keeping her fist down in her first meeting with Braekhus, it’s all been part of the plan for McCaskill. On Saturday, it’s time to make it all come together.

If all female fighters looked like these two, women's boxing would be 3x more popular :love: