This past weekend Showtime made it clear the network is investing in women’s boxing by airing two different fights between women on a three-fight card. Two-time Olympic gold medalist Claressa Shields headlined the broadcast, scoring a commanding unanimous decision over Ivana Habazin and picking up titles in her third division in the process.

In the aftermath of Shields’ victory, the immediate concern is finding challenging and compelling opponents for the 10-0 star. While a graphic on Showtime’s broadcast highlighted a handful of prospective foes, reigning women’s IBF welterweight champion Layla McCarter, scheduled to fight on April 4th in Portland, Ore., wasn’t on the list.

McCarter, a seasoned veteran unbeaten for 12 years, wasn’t happy about it.

“[Seeing the graphic] pisses me off,” McCarter told BoxingScene. “They’re trying to ignore me, freeze me out. So many of these fighters are trying to pick and choose and the sanctioning bodies allow it.” 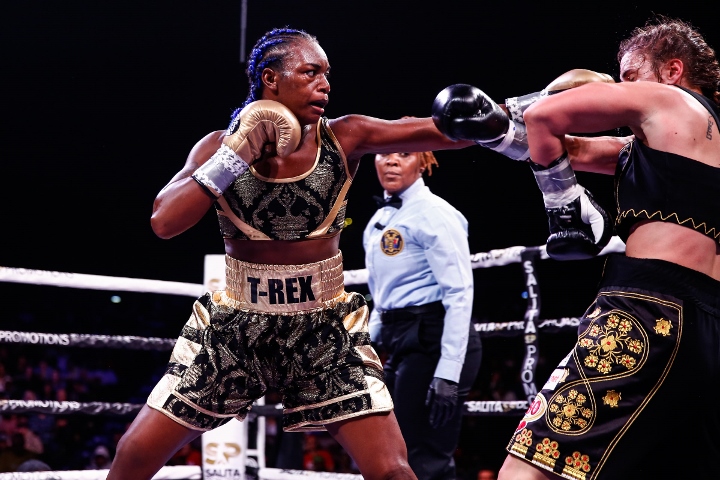 Even so, McCarter admits two women’s fights on a single card was great to see.

“It’s awesome,” she said. “It’s an amazing moment, to have two of three fights be female fights.”

Indeed attracting interest from major networks is no small feat for any fighter as streaming services and evolving promotional alliances alter boxing’s landscape. And historically women have only managed to intermittently thrive.

Shields could be different, though. Sponsorship deals with the likes of McDonalds, Audi and Powerade are the kind most athletes dream of, and Shields has landed all three. Headlining two Showtime cards in a row, Shields may be ushering in a new era of women fighters and Layla McCarter believes she deserves to get in on it.

“In over 21 years as a professional we never had this kind of opportunity,” McCarter said. “Now that it’s here I want to be part of it and I want to get paid. I don’t think that’s wrong.”

While McCarter respects Shields for seeking out tough fights, she says Shields’ oft-criticized attitude keeps from winning her over.

“For me [Shields’ attitude] turns me off,” McCarter laughed. “The only reason I watch is because it affects me, I might fight her in the very near future. If it weren’t for that I wouldn’t be watching. I don’t like her, her attitude, she talks a lot of trash and thinks she’s the first person to ever lace up gloves. To be honest I’m not that impressed with her fighting. She’s good, but she’s not as great as she thinks she is.

“She lacks power and fought a girl that can’t even fight and couldn’t put her away. She has so much amateur experience she’s still fighting in that amateur style. Either she hasn’t learned how to put power in her punch or she lacks power.”

“It’s kind of weird,” said McCarter. “I’m not in [Shields’] weight class and I haven’t been near her weight class. I’m a welterweight now, but I’m naturally a lightweight. But I’ve been a welterweight for a long time now, and I’ve been the number one welterweight, chasing Cecilia Braekhus. It’s clear she doesn’t want any part of it. I’m still number one in the WBA, but I’ve given up on her. I need to look above and below me. So I could go down to 140 and meet [Katie] Taylor or up to 154, whatever [Claressa] Shields wants to fight at.”

It’s been a long two decades of fighting and McCarter has 61 fights on her ledger at 40-years-old. Why not retire?

“I’m stubborn and I refuse to give up,” she answered. “I can’t give up short of what I’d like to do, which is cash out and make decent money so I can move on and do something else in my life after boxing.”

McCarter has a simple message for the women fighting from 140 to 154 pounds: “I’m still here. That’s why I’m fighting for Steve Forbes on April 4th -- to get some activity and let people know that I’m still here.”

Mcarter unfortunately is to old now , Doesent punch, not fought in a year against any names , in the last 2 yrs held bull**** titles ( GB.. something WIBF ) she should get on with her life and do…

So she’s not using her man strength

[QUOTE=daggum;20332504]im not sure since there are two. i guess the better one? or i dont know since he looked garbage against korobov. when you don't have good fighters i think you just wait until you can find some over the…

[QUOTE=MulaKO;20332493]Who’s this Charlo you mention Maybe he can get it on with the lioness Clarissa Nah he would duck her to[/QUOTE] im not sure since there are two. i guess the better one? or i dont know since he looked…