Mayweather: I Came To Brazil To Welcome Stevenson To TMT

Floyd Mayweather Jr. made it as clear as possible Wednesday that, above all else, he traveled to Rio de Janeiro for one important purpose.

The retired superstar is intent to sign emerging American amateur star Shakur Stevenson to a professional contract once the 2016 Summer Olympics end over the weekend. Mayweather Promotions, and by extension powerful Mayweather adviser Al Haymon, and Jay Z’s Roc Nation Sports are expected to be the strongest suitors for Stevenson’s services once his impressive amateur career concludes.

Stevenson, a 19-year-old southpaw from Newark, New Jersey, has reached the bantamweight semifinals in Rio. He might advance to the 123-pound gold-medal match Sunday by walkover, rather than have to fight Thursday afternoon. 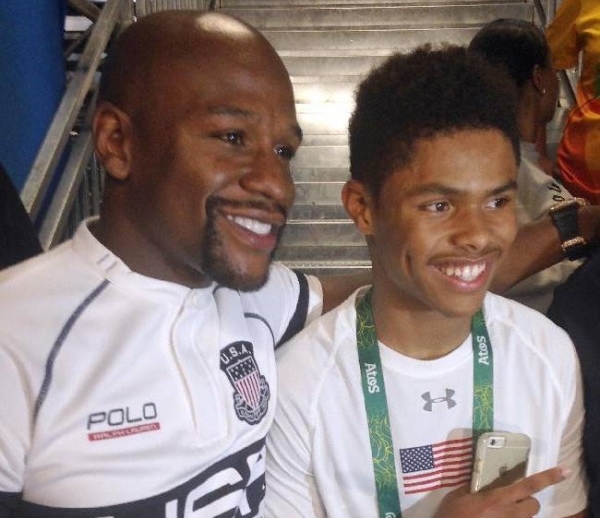 Russia’s Vladimir Nikitin, Stevenson’s scheduled opponent, reportedly has withdrawn from their semifinal due to several cuts he sustained during a highly controversial three-round victory over Ireland’s Michael Conlan in the quarterfinals Tuesday.

Either way, Mayweather sees incredible potential in Stevenson, whom the undefeated five-division champion referred to as “the next Floyd Mayweather” on Tuesday.

Mayweather sent out these Tweets on Wednesday:

1/ I came all the way to Brazil to support athletes of the United States, but while enjoying the events I had one goal in mind

2/ and that was to extend a warm welcome to @ShakurStevenson into The Money Team family.

The nature of any discussions between Mayweather and Stevenson and/or his representatives in Rio is unknown. They have, however, posed for photos together.

Stevenson also acknowledged Wednesday that it made him “nervous” to know Mayweather was watching and shouting instructions during his easy three-round defeat of Mongolia’s Tsendbaatar Erdenebat in the quarterfinals Tuesday.

“When I came out and saw Floyd Mayweather, I got excited and a little nervous,” Stevenson said. “As soon as I came out of the hall, he was right there, leaning over the balcony, yelling.

“He kept saying, ‘Jab!,’ and then he kept saying, ‘Go to the body!’ I heard him a lot. He’s been in the same situation and he’s mastered boxing, so of course I have to listen when I hear Floyd talking.”

Twenty years ago, Mayweather lost an infamous 10-9 decision to Bulgaria’s Serafim Todorov in the featherweight semifinals at the 1996 Summer Olympics in Atlanta. The 39-year-old Mayweather (49-0, 26 KOs) hasn’t lost since dropping that dubious decision.

[QUOTE=turnedup;16959243]I really really really hope this kid has a good lawyer read anything anyone puts in front of him....I know meeting your idols can be super dope and that adrenaline and joy may make you overlook shhh but take care…

[QUOTE=BrushMyHair.;16960971]Shakur is in good hands. Floyd should smuggle ramirez in his jet to the United States[/QUOTE] Yo Brush are you doing the league again this season?

[QUOTE=NUCLEAR;16959775]Floyd is a bad influence for stevenson. Soon we will hear on the news stevenson is arrested for abusing women. He should sign with Haymon.[/QUOTE] Haymon is not a promoter you hating little donkey.

Shakur is in good hands. Floyd should smuggle ramirez in his jet to the United States

nice i think floyd will move him quicker than arum or de la hoya would it seems GBP has their eye on balderas jr, so i wonder who will get vargas, hernandez, russell and conwell. i can't see arum letting…