Mayweather: I Believe in Shakur Stevenson, I See The Next Floyd!

RIO DE JANEIRO -- His focus seemingly unflappable, Shakur Stevenson was briefly distracted when he heard a familiar voice as he walked out for his Olympic bout. "Augie! Augie!" Floyd Mayweather Jr. was in the house and shouting at U.S. boxing assistant coach Augie Sanchez.

Stevenson had been bummed out when he was told Mayweather had left the Rio de Janeiro Games. Turned out, the rumor was false and one of Stevenson's biggest fans had the best seat in the arena to watch the top U.S. prospect continue his medal run.

"I got a little more nervous again," Stevenson said. 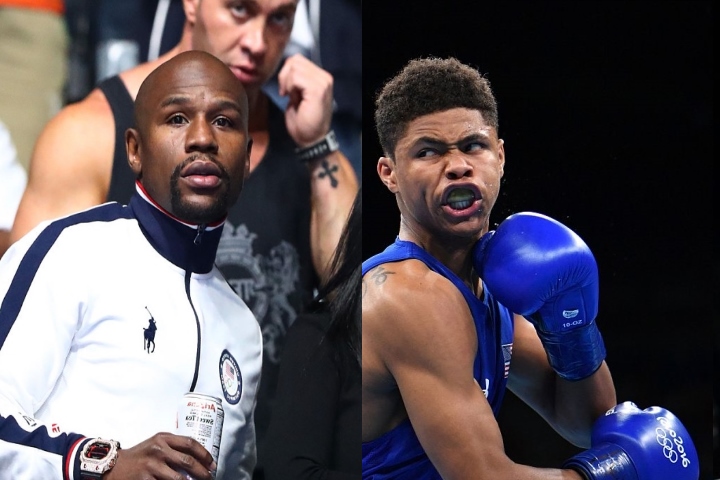 Stevenson, who is from Newark, New Jersey, calmed his nerves and made a lasting impression on Mayweather with a convincing win over Mongolian fighter Tsendbaatar Erdenebat. The retired, undefeated Mayweather went wild for the 19-year-old Stevenson in a unanimous decision victory that guaranteed him a medal.

And why not? Mayweather saw Stevenson fight with a style in the ring that reminded him of another great fighter.

"I see the next Floyd Mayweather," Mayweather said. "If anybody can break my records, this young kid right here can do it. I truly believe in him."

Mayweather believed in Stevenson (24-0 in international competition) so much that he expected more than gold for Stevenson - Money May wanted the prized prospect on his blossoming Mayweather Promotions roster.

"When I saw him at my gym, I said, 'Who is this guy?' I want to sign him instantly," Mayweather said. "I thought he was a professional. They said he was an amateur but he's got a professional style. He's the No. 1 guy, of course, that I'm interested in."

Stevenson (wearing a "Team Shakur" shirt) and some friends and family joined Mayweather in the stands and posed for even more pictures. Mayweather stood to Stevenson's side and touted him as the hopeful future face of Mayweather Promotions.

"He's a great amateur and some day he's going to be a world champion at the professional level," Mayweather said.

Stevenson was asked immediately after his bout to grade his performance and gave himself a B-minus.

"I've got to close out the show a little bit better. The third round, I've got to finish it off," he said.

Stevenson's grandfather, Wali Moses, began teaching him how to box when he was 5, and he has barely lost since he won his first fight at 8. Stevenson's mother, Malikah, named him after Tupac Shakur, the rapper and social activist who died nine months before her first son was born. Stevenson mostly avoided trouble on Newark's tough streets, and his grandfather's steady influence kept him devoted to his sport.

Andre Ward was the last American man to claim the top prize with at the 2004 Athens Games, and the London men's team failed to win any medals at all for the nation that still leads the world in Olympic golds and total medals.

Stevenson has Russian fighter Vladimir Nikitin up next and the winner goes for gold.

He was all smiles Tuesday when he had Mayweather by his side as they fought through a mob to escape the arena. It's even better for Mayweather to have his back.

"It's everything," Stevenson said. "That's the greatest of all time."

[QUOTE=Mike_R;16955150]The kid is sharp. It might not say so much that he completely outclassed a Mongolian fighter today- but he did nonetheless. There haven't been that many fights in Rio that have had one fighter in complete control the way…

next floyd sounds more like a babied, pampered spoonfed commercialized fighter to me.....take the warrior way shakur it aint too late

[QUOTE=puga;16956303]i guess it's safe to say shakur is gonna duck a lot of fights then (when fans are mostly calling it)[/QUOTE] At least he won't have Rabies...

[QUOTE=ShoulderRoll;16956335]So Americans can't get excited about American Olympic boxers now? Just because they might be black? You have sunk to a new low.[/QUOTE] That losing bi.tch freedom is always sinking to new lows...it's in his sorry DNA.