Costa Mesa, California - Maxim Dadashev was forced out of his comfort zone just enough to flatten Ricky Sismundo in the fourth round of an entertaining scrap that saw both boxers hit the canvas.

Dadashev— trained by Buddy McGirt and fights out of manager Egis Kllmas’ gym in Oxnard,—boxed smart early on, fighting behind a tight guard while Sismundo offered a herky jerky style in his best effort to disrupt the timing of his unbeaten foe.

It paid off late in round two, when Sismundo used a pawing jab to score with a straight left hand to floor the unbeaten Russian prospect.

It proved to be an isolated moment, although Dadashev needed a round or so to regain his bearings. By round four, he found himself back in control, although Sismundo (35-13-3, 17KOs) was insistent on testing the heart of his younger foe.

The Japan-based Filipino would pay ever so dearly. Dadashev (13-0, 11KOs) planted his feet just long enough to connect with a crushing left hook, right hand combination to send the veteran crashing to the canvas. Sismundo staggered to his feet, but was in no condition to continue as the bout was stopped at 2:30 of round four. 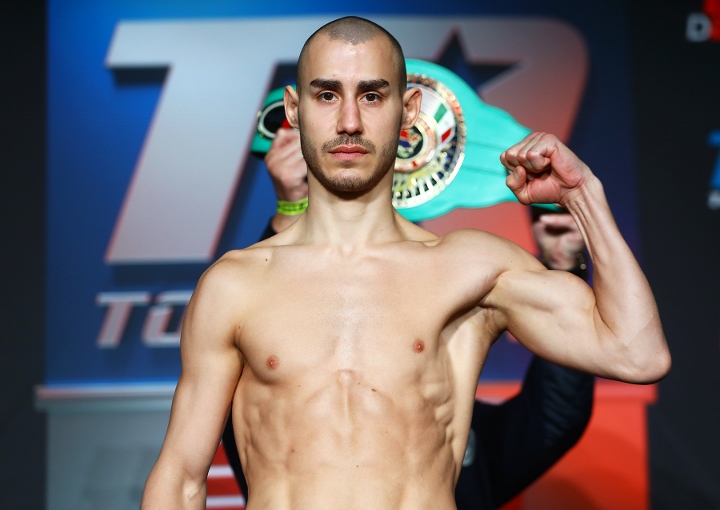 Tervel Pulev got the evening off to a good start for his fighting family, scoring a six-round decision over Mitch Williams in their awkward cruiserweight affair.

Williams was just three weeks removed from a competitive cruiserweight battle versus former 168- and 175-pound contender Edwin Rodriguez but didn’t show any sign of fatigue against the taller Pulev. The 36-year old Jackson, Mich. southpaw made things difficult on the inside, prompting Pulev to concentrate on finding his range and working his jab.

Even in his best efforts to dictate the pace, the night never got any easier for the younger Pulev. He was clearly frustrated by his foe’s scrappy style, twice hitting Williams (16-8-3, 11KOs) on the break in round four which resulted in a point deduction administered by referee Jerry Cantu.

The unbeaten cruiserweight prospect overcame the gig to box his way to victory in the final two rounds. Williams’ activity slowed as Pulev (13-0, 11KOs) was able to work his jab and clinch whenever he felt like catching a breather.

Baby-faced middleweight prospect David Kaminsky was advanced to the livestream portion of the evening and didn’t disappoint in a four-round unanimous decision win over Arizona’s Estevan Payan (1-7-1, 1KO).

Doubt he's that good if someone with that record dropped him, inexperienced or not. Either that or Dadeshov looked kind of weight drained at the scales, maybe he needs to move up.

He got floored by someone with 7 loses. Someone he is bigger than. He struggled in his last fight. Nothing special about him. The mitch Williams fight was a disgrace. That score card was a disgrace.