Max Ornelas Crushes Alex Rangel in The First Round

Bantamweight Max Ornelas remained unbeaten Thursday night, stopping Alex Rangel in the second round at the Casino Del Sol in Tucson, Arizona.
With the win, Ornelas improves to 13-0-1, 5 knockouts.

Ornelas had not fought since Aug. 10, when he defeated Raymond Tabugon by unanimous decision. Rangel figured to be a stern test, but the taller Ornelas was too skilled and strong for Rangel.

After a slow start, Ornelas began letting his hands go, throwing two and three-punch combinations to the shorter Rangel. About a minute into the second round, a left hook from Ornelas to the head dropped Rangel to the canvas. Rangel beat the count, but was battered against the ropes until referee Tony Zaino stopped the bout at 1:24. 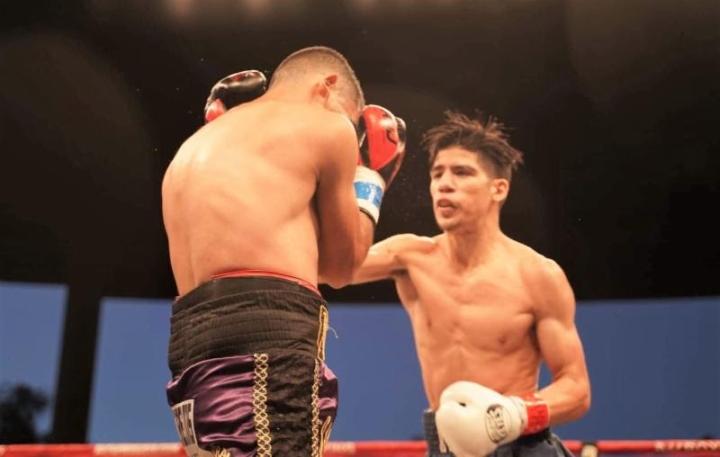 The 20-year-old Ornelas, who lives and trains in Las Vegas, is ranked No. 11 by the WBO. Ornelas is a criminal justice major at the University of Nevada at Las Vegas (UNLV).

Rangel (17-10-4, 9 KOs), who resides in Ciudad Obregon, Sonora, is now winless in his last six bouts.
In the main event of the Roy Jones, Jr. Promotions card, Simone Da Silva pulled off an upset on paper when she defeated Ikram Kerwat by unanimous decision.

Kerwat, who is originally from Tunisia and now resides in Frankfurt, Germany, drops to 9-2, 5 KOs.

Junior middleweight prospect Madiyar Ashkeyev, who is originally from Kazakhstan and now resides in Oxnard, defeated Cecil McCalla (21-4, 8 KOs) by unanimous decision. Scores were 98-92, 98-92, and 97-93 for Ashkeyev, who improves to 12-0, 6 KOs.

so was it the first round or the second?