Mauricio Herrera’s roller coaster three-fight 2014 is the fulcrum, if not, the epitome of “The Maestro’s” up-and-down career.

“A lot of people think I won those fights against Danny Garcia and Jose Benavidez, and after losing to Benavidez, that kind of hurt a little bit and represented the way things have gone with my career. I was almost forgotten, which is frustrating. I fight a certain way, and the judges don’t always reward my technique, style and efforts. But I’m 38 years old, so I there’s more a sense of urgency,” said Herrera.

“I’m not a power-puncher, and it’s not like I can completely change my style. So I have to work with that I have and what has gotten me there because if I put myself out there, too much, it might not go so well. So I pretty much have to stick with what I know, which, at times, I feel has been an advantage. I gave my best in the championship rounds of those fights against Garcia and Benavidez, and I think you’ll see that in this next fight as well.” 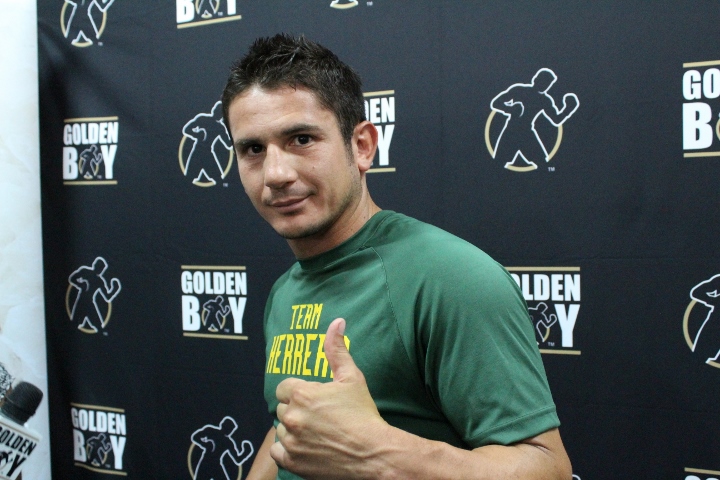 The 30-year-old Ali returns to the site of his career-defining unanimous decision that dethroned and retired Puerto Rican four-division and then WBO 154-pound champion Miguel Cotto in July 2017, but “World Kid” lost his first defense in May by four-knockdown, fourth-round TKO to power-punching Mexican Jamie Mungia (31-0, 26 KOs) at The Turning Stone Resort & Casino in Verona, New York.

“The Maestro” has won two straight by unanimous and majority decision over Hector Velazquez and Jesus Soto Karass in March and August 2017, and believes he’s seen elements of a fragile psyche during Ali’s loss to Mungia and his unanimous decision over common opponent Perez in July 2017.

“I’ve watched our two fights against Perez several times. When I fought Perez, he was sharp, had the title and was at his best, but I did pretty good with him. I thought Sadam had a lot of problems with Perez, struggling at times in what I didn’t think was a complete, clean win. I’m good with the mind games, so I have to get into Sadam’s head and break him down, mentally,” said Herrera, of Riverside, California.

“From his last fight, mentally, he has to be coming in a little cautious and conscious [of potentially getting knocked out.] I just have to give him a reminder that he’s in another tough fight, frustrating him and not letting him into a rhythm. I will be there to figure out if his mind is a little weak from his last fight. If I can get into his head a little bit, then I think that will go a long way toward me winning .”

Herrera was 13-0 with six knockouts before losing to Mike Anchondo in December 2009. He then won five straight (one stoppage), including unanimous and majority decisions over previously unbeaten future champion Ruslan Provodnikov (January 2011) and once-beaten Mike Dallas Jr. (June 2011).

Herrera won his lone fight of 2015 by decision over Henry Lundy (July) before falling by unanimous and split-decision to undefeated Frankie Gomez and Pablo Cesar Cano in May and November 2016.

Ali was 22-0 with 13 KOs before losing a 147-pound vacant title fight by ninth-round TKO to Jessie Vargas in March 2016, and rode a four-bout winning streak into his Munguia bout.

“We had always talked about fighting Sadam Ali, and now, it’s in New York in a big arena with a great opportunity to be fighting beneath the Canelo fight,” said Herrera, whose last stoppage win was in the sixth round over Efren Hinojosa in April 2010.

“When the pressure’s on, it makes you wanna pick up your game. I haven’t been knocked out, but I also haven’t been getting knockouts. So if I see something -- any sign of opening or weakness in Sadam -- I’m going to go that extra mile and go for it.”

And what if he loses?

“A loss or a robbery can happen. If I get robbed, it depends on how I feel a week or two after the fight, emotionally, when my mind has cleared,” said Herrera, trained by Jose Torres.

“But I’m not thinking negatively, so that’s not something I’m looking at or something see that happening because I feel so strong and confident, mentally and physically, for this fight.”

They are using this fight to try to bring Ali back again, hope it bacfires and Mauricio put him to sleep.

Herrera you missed the boat AND the train, bro. You got stuck by some bad decisions. Once you had that good night vs Danny... shoulda capitolized, my Man. Then ya had a couple decent showings but didn't have anybody do…

You can never count out and old Lion like Mauricio.... I'm picking him to stop Sadam Ali... WAR MAURICIO EL MAESTRO!