Matthysse's Manager: Pacquiao Will Get Knocked Out in 6 or 7!

KUALA LUMPUR, Malaysia -- WBA welterweight "regular" champion Lucas "La Maquina" Matthysse (39-4, 36 KO's) of Argentina has the huge fighting job of defending his title against the still fast hands and unpredictable southpaw moves of one of the greatest boxers of his generation, Manny "Pacman" Pacquiao (59-7-2, 38 KO's).

The fight takes place this coming Sunday July 15 [July 14 in America] in Kuala Lumpur, Malaysia; and Matthysse's long-time manager Mario Arano, 65, has 100% confidence that his hard-hitting fighter can beat the Filipino boxing legend.

For Arano, Matthysse is not only his fighter (since 2004 when "La Maquina" turned pro), as well as his friend of many years; but also an inspiration and a beacon of hope for South American boxing. 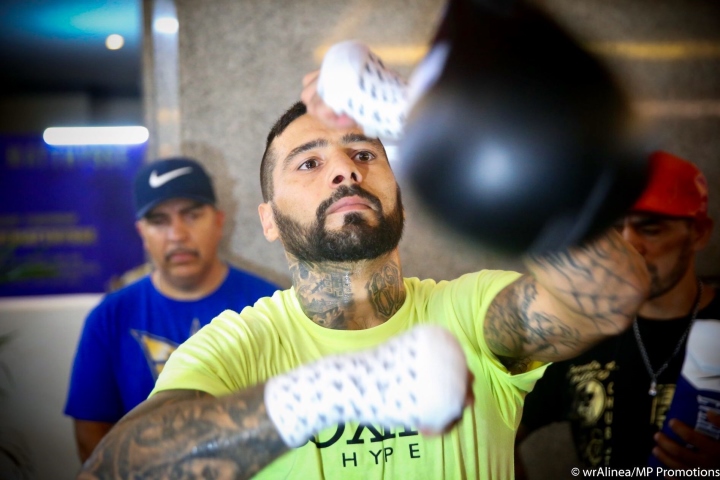 That is why boxing fans in South America, especially boxing fans in Argentina, are so much excited and so much interested in Lucas. I see his popularity rising up in social media. I see that in forums, in whatsapp chats, in the many emails that we receive, all expressing good wishes to Matthysse in his coming fight against Manny Pacquiao here in Malaysia.

I can say that if Matthysse wins his fight against Pacquiao, South American boxing would get a huge pump-up in optimism. I have no doubt of that. Our promoters, our boxers and all alike would love a victory of Lucas, and our fighters would want to emulate his success.

In addition, in South America, we have certain social problems with our kids that we as society has to address. These social problems affect sports and boxing. There are certain problems in our country Argentina, as well as in other countries like Colombia and even Brazil. Brazil hasn't come up with any star boxers; and kids are not getting into the boxing gyms.

I said during the press conference last April here in Malaysia that Lucas Matthysse will be the flag-bearer of South American boxing. Should Matthysse comes out victorious, his win will have a positive effect in our boxing.

BoxingScene.com: And, if Matthysse wins by knockout, it would be even more spectacular the effect?

But this is now the time for Lucas Matthysse. The best times of Manny Pacquiao were in the past.

BoxingScene.com: An important feature in Matthysse's boxing is his still devastating punching power. He proved in his last fight last January. It could be a factor in his fight against Pacquiao?

Arano: Sure yes. I think that Lucas Matthysse still has a huge, damaging power punch. Plus he has experience. In fact, he has a total of around 170 fights amateur and professional fights. He is a tough fighter with skills who has fought all over the world. As an amateur boxer, Matthysse boxed and represented his country Argentina in international tournaments for about 5 years.

As a professional boxer, Lucas had lost only 4 fights, two of those loses were questionable split decisions that Matthysse should have won. I am talking about his dubious split decision loses to Zab Judah and Devon Alexander.

Moreover, if you see Lucas' face, he does not have any huge scars from battles. His nose is intact. The guy looks like a movie star.

This is the fight that Lucas Matthysse wanted. And it was the fight that our boxing promotion company, Arano Boxing, wanted, and here we are in Malaysia, ready to fight.

The author of this report Carlos Costa of Panama is Boxingscene.com fight reporter based in Cebu, Philippines. He will attend the Pacqiuao-Matthysse fight in Kuala Lumpur, Malaysia. Carlos can be reached by email: Carlos512@hotmail.com and by Whatsapp/Viber +639184538152.

well, at least they got the round right.

[QUOTE=man down;18930907]Really? His angles are garbage huh.[/QUOTE] Never said they were... My post clear, Pacquiao is immensely more skilled, and if his chin holds up, he will win. And believe me it will get tested.

What's with vicious talk of battering old man pac? When Larry Holmes was beating ali his idol he was crying and going easy on Ali!

[QUOTE=mxtali;18930832]Pacs never been hard to hit. And he’s not getting any faster. If his chin holds up he wins.[/QUOTE] Really? His angles are garbage huh.

[QUOTE=Gillie;18930510]Mathysse's team has been flapping their gums quite a bit recently. It wouldn't surprise me if Lucas gets beat down. Pac may be a shell of himself but it's not like Mathysse is in his prime either.[/QUOTE] They think Matthysse…

ADD COMMENT VIEW COMMENTS (20)
Advertisement
Top Headlines Ennis: Extra Weight Won’t Matter For Abreu; I'll Go In There & Get The Stoppage Pedraza: As I Keep Moving Forward, Fights Will Keep Getting Tougher And Tougher Alex Saucedo vs. Arnold Barboza Jr. To Co-Headline Lomachenko-Lopez On 10/17 Erickson Lubin: You Could See How Much I've Changed Since The Charlo Fight Jaron Ennis: I Might Have To Get Into A Mandatory Position To Get A Title Shot Ajagba: Time Away From Ring Was Frustrating, Hurts To Not Be Able To Do Something You Love Nyambayar: I Had A Sprained Ankle Against Gary Russell; I'd Love A Rematch Lubin: I'm Fresher, Hungrier Than Lara & Trout; Looking To Make Statement Against Gausha Pedraza: I Think Lomachenko Will Dominate Lopez, But He Can't Get Reckless Daily Bread Mailbag: Charlo Brothers, Ennis, Canelo, Spinks, More BoxingScene.com's Television Pick of The Week - September 19 McKenna: Beating Ohara Davies Will Be Highlight of My Career Joe Joyce: We'll See if Dubois Can Take My Heavy, Powerful Shots! Frank Warren: Whyte Received Shorter Medical Suspension Than Spelman? Francis Chua Aims To Fight, Looks To Kambosos, NG, MacKenzie Boxing Facing Financial Adjustments Johnny Nelson Confident Whyte Would Have Benefited With Tibbs in Corner Vijender Singh Hopes To Resume Career Before Year is Over Josh Taylor Must Remain Focused on Khongsong, Says Ben Davison Javier Molina: Pedraza Looked Good With LesPierre - I'm No LesPierre! Amir Khan Appointed as President of WBC Middle East Boxing Council Ajagba vs. Rice, Ramirez vs. Caraballo - Ready To Fight Jose Pedraza, Javier Molina - Set For Showdown in Las Vegas Pedraza-Molina ESPN+ Weigh-In Report From The Bubble Ennis vs. Abreu, Nyambayar vs. Breedy - Set For Bouts Erickson Lubin, Terrell Gausha - Ready For WBC Eliminator Haven Brady Jr. Inks Promotional With Top Rank Crawford vs. Brook Negotiations at Advanced Stage For November 14 Zhang Zhilei Inks Promotional Pact With Eddie Hearn Juan Carlos Abreu Comes In 3-Plus Pounds Overweight For Jaron Ennis Fight Rene Tellez-Giron Return Pushed Back Due To COVID-19 Terrell Gausha: I Was Nervous That I Wouldn't Get This Fight Again Teofimo Lopez: Lomachenko Is On His Way Out, I'm Looking Through Him Jermell Charlo: I Don't Want Judges To Make Decision For Me Against Rosario Hearn on Yarde-Buatsi: It's a Massive Box Office Fight at The O2 Abreu: Either Jaron Ennis Knocks Me Out Or I Will Knock Him Out Bilal Fawaz Inks Agreement With MTK Global Lewis Ritson Vows To Fight His Way To a WBA Title Shot Fury vs. Joshua: Hearn Says Deal On The Verge of Being Put on Paper Graveyard Shifts At Warehouse Motivated Molina To Turn Around Boxing Career
Advertisement
Latest Boxing Videos 'The Journey - Charlo Doubleheader' 30 Minute Special Showtime Releases Trailer For Documentary 'Ringside' Charles Martin Reacts To Helenius Stopping Kownacki Robert Helenius Reacts To Shocking TKO of Kownacki Adam Kownacki Reacts To TKO Defeat To Helenius Joseph Parker Reflects on Fury-Wilder, Talks Return Mikey Garcia Reflects on Fury-Wilder, Talks Vargas Eddie Hearn Reflects on Fury Stopping Wilder, More Kenny Porter Reacts To Tyson Fury Stopping Wilder Jose Ramirez Reacts To Tyson Fury Stopping Wilder
Recent Top Stories Graveyard Shifts At Warehouse Motivated Molina To Turn Around Boxing Career Erickson Lubin vs. Terrell Gausha: The Play-In Derevyanchenko Vows: I'm Ready For Everything in Charlo Fight Remembering "The Showdown" – Still a Thrill After 39 Years
Advertisement
Latest Forum Threads
Advertisement
Advertisement
This website may contain adult language.
TM & © 2020 BoxingScene. All Rights Reserved.