Martin Joseph Ward never wants to relive the feeling he had watching his lone career conqueror take the title shot he long desired.

The streaking junior lightweight contender has fought accordingly, extending his win streak to five straight following a 10-round shutout of Mexico’s Jesus Amparan. Ward prevailed by 100-88 on the lone scorecard in their non-title fight Saturday evening at Sheffield Arena in Sheffield, England.

Ward was in complete control over the course of the DAZN/Sky Sports televised opener. The Brentwood, England-based boxer worked behind a purposeful jab in the early going, creating openings all evening for his long right hand, to which Amparan had little to know response.

The first real sign of trouble came in round five, when Ward pummeled Amparan with power shots. The visiting foe was given a long hard look by referee Howard Foster but managed to fight back well enough to allow the action to continue. 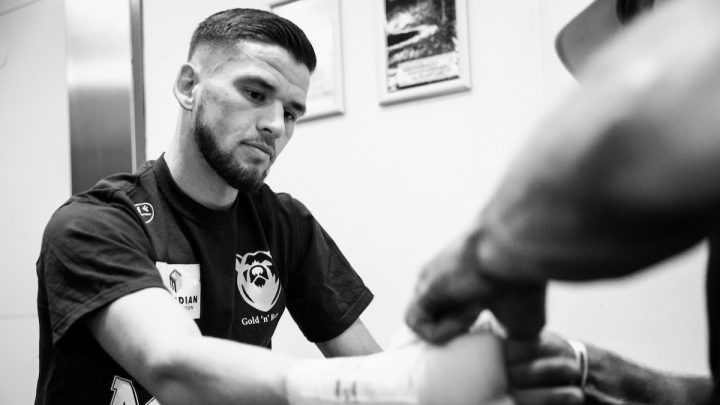 It merely provided Ward with a more extensive platform to showcase his dominance. The 28-year old continued to thoroughly outwork Amparan, no longer settling merely for a win but looking to close the show. Ward mixed up his attack, landing right hands upstairs and hooking to the body.

Amparan showed considerable wear in tear in round seven, where he hit the canvas for the first time in the fight. A sharp right hand to the body by Ward floored the Mexican slugger, forcing him to a knee where he remained for the issued mandatory eight count by referee Howard Foster.

Ward went back on the attack in round eight, though Amparan caught a breather the hard way after absorbing a low blow. The sequence didn’t at all discourage Ward from continuing to punish the body, although offering a bit more defense in round nine when it became apparent that the bout was likely heading to the scorecards.

Amparan was forced to climb off the canvas once again, absorbing a left hook to the body in the 10th and final round. He managed to beat the count and finish the fight on his feet, although at the expense of his four-fight win streak comes to a close. Amparan falls to 16-2 (14KOs), with both of his career defeats have coming on the road as he remains winless outside of Mexico.

Meanwhile, Ward rolls on as he eyes a title shot of his own. The streaking contender advances to 29-1-2 (13KOs), having now won five straight. His lone career defeat came at the hands of James Tennyson, who went on from their May 2018 clash to face then-junior lightweight titlist Tevin Farmer in October 2018.

Ward now has his sights set on a title shot of his own, angling for a crack at recently crowned 130-pound title claimant Rene Alvarado.

The bout served in supporting capacity to the ring return of local hero Kell Brook, as the former welterweight titlist faces Massachusetts’ Mark DeLuca (24-1, 13KOs) in a scheduled 12-round junior middleweight contest.