Marriaga: We Are Going To Do Everything Necessary To Get That Win

Miguel Marriaga knew precisely what he wanted heading into his last fight—and it wasn’t just a win in a fight where one was expected.

By the time he landed a perfectly placed body shot to send Alfredo Meija to the canvas, it was on to new business as far as the Colombian slugger was concerned. No time was wasted in calling out then newly crowned featherweight titlist Shakur Stevenson (13-0, 7KOs), with that very wish granted as he enters his fourth shot at a major title.

“I am happy, we have been working very hard and serious for a new title shot and up to know everything has gone accordingly,” Marriaga (29-3, 25KOs) told BoxingScene.com. “We had been working at 100% since my last fight knowing the opportunity was around the corner.

“I was sure when my promoters told me I would fight for the title and here I am.” 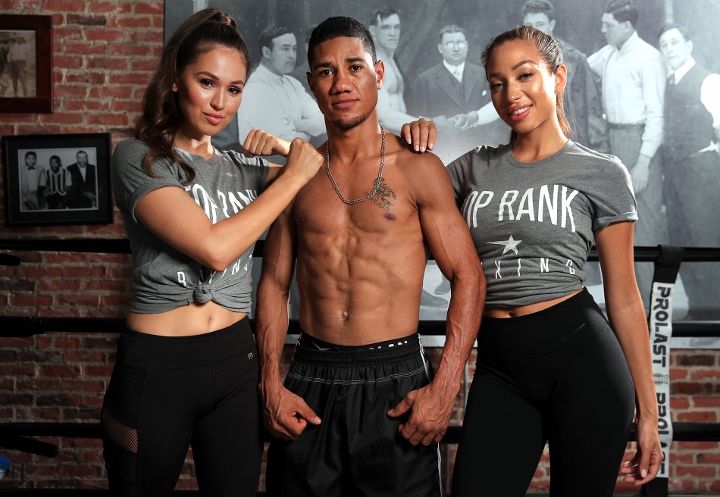 The opportunity comes at the site of Marriaga’s first title bid, as he faces Stevenson this weekend at Madison Square Garden’s Hulu Theater in New York City (Saturday, ESPN, 10:30pm ET).  It was at this very venue where a then-28 year old unbeaten contender was dealt his first taste of defeat, though coming against an over-the-limit version of Nicholas Walters, who was forced to vacate his belt at the scale after missing the featherweight limit.

Marriaga came up well short on the scorecards, having to wait another two years before getting a second opportunity. Five straight wins had preceded his April 2017 clash versus Oscar Valdez, dropping a 12-round decision for a version of the featherweight title that will be at stake this weekend. Four months later came an ill-advised move to 130, where he was manhandled in seven rounds by Vasiliy Lomachenko.

“After those two bouts, we have tried to [improve flaws],” admits Marriaga, who is co-promoted by Top Rank and All Star Boxing. “With more experience (and ring activity, it has helped me gained confidence in my abilities to come better prepared mentally.”

The 33-year old enters his clash with Stevenson having scored four straight knockouts, none lasting longer than six rounds. None have been on the level of his prior conquerors or even Stevenson, who proved his worth in a dominant 12-round decision over unbeaten Joet Gonzalez in their vacant title fight last October.

Still, the streaking contender is confident he’s come far enough along to surpass the 12/1 odds that suggest Stevenson will make the first successful defense of his title.

“I think that the fights I had with (past champions) has helped me gained experience since I have fought the best,” insists Marriaga. “We are going to do everything necessary to get [that win] in the ring. I’m prepared to adjust to anything that might present itself.”

Shakur is a solid fighter. I’ll refrain from my racist antics