Marriaga Was Crushed When Stevenson Fight Was Canceled

Featherweight contender Miguel Marriaga admits he was mentally crushed when Top Rank informed him and his team that a scheduled fight with WBO champion Shakur Stevenson was being canceled.

Marriaga was scheduled to fight Stevenson this past Saturday night, March 14, at the Hulu Theater in Madison Square Garden in New York City.

In what was likely his final chance at a world title, Marriaga was hoping to bring the WBO belt back to Colombia. 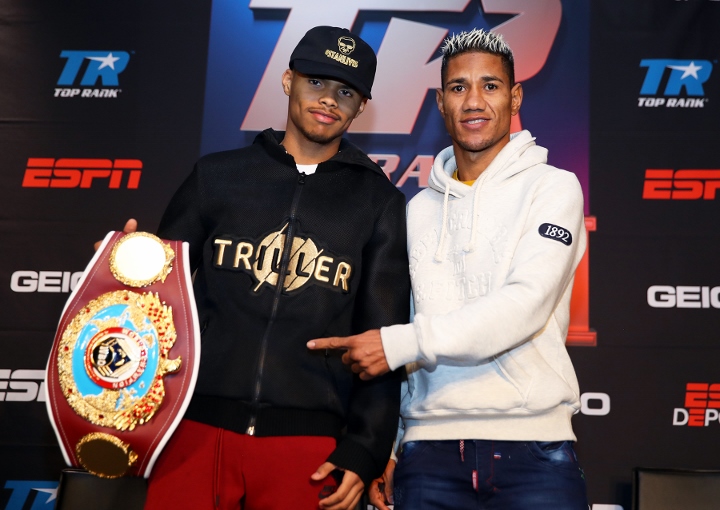 Marriaga had three failed world title attempts in the past, and he was hoping that his fourth time would be the charm.

But due to the ongoing coronavirus pandemic, all boxing events were canceled in New York City for the month of March and April.

There is no guarantee that Stevenson will face Marriaga in the future. The world champ is likely going to face another opponent.

"During the afternoon of Friday the 13th they gave me the bad news. It was hard. I dreamed of presenting Arjona with the world boxing title, it has always been my dream to get my family ahead," Marriaga told Andres Utria.

"God will give me the opportunity to make the dream of becoming world champion come true. This time it could not be done."

During the entire preparation stage in Cartagena, Mexico and New York (more than two months) he tried his best and perfectly prepared his left hook, his deadly weapon.

For his part, his coach Samuel Gómez said that “it hurts because we made such a great effort. We arrived a month earlier in Mexico looking for better physical-athletic conditions. Miguel prepared himself conscientiously, ran more than 2,600 meters above sea level in the desert of Toluca and Los Leones. We had a very good strategy, but God is perfect and we will continue training. The new opportunity will come."

Still getting that matchup lad, don't be unhappy

Also in the minority here, I still don't rule out a upset against Shakur Stevenson. Miguel Marriaga have that puncher chance and the underdogs are rising their game more in this early year. :boxing:

[QUOTE=Phill lynott;20471289]Btw for the record, Marriaga stops Shakira. Belive it![/QUOTE] It’s possible. I took a serious look at the fight and was just starting to see how possible it was when the fight was called off. Would have been worth…

Btw for the record, Marriaga stops Shakira. Belive it!

I think Arum and the boys new Marriaga was going to take that belt home. Stevenson's camp new it also. So between the two they're the happiest tandom in boxing right now. They took the excuse and canceled quick. No…