Marriaga: Boxing Is Very Unpredictable, All I Can Do Is Be Ready To Fight

Miguel Marriaga can only hope that the third time will be the charm.

It serves as the number of training camps that the veteran featherweight contender has endured just to get to his first fight of 2020. Adding to his frustrations is the fact that Marriaga has taken part in fight week activities on each occasion, only to watch his two previously scheduled bouts fall apart for drastically different reasons.

Nevertheless, the knockout artist from Arjona, Colombia remains cautiously optimistic that his upcoming clash versus Joet Gonzalez this weekend will ultimately see the light of day.

“It’s the third time I’ve been in training camp for a fight and hopefully the fight finally happens this time,” Marriaga (29-3, 25KOs) told BoxingScene.com. 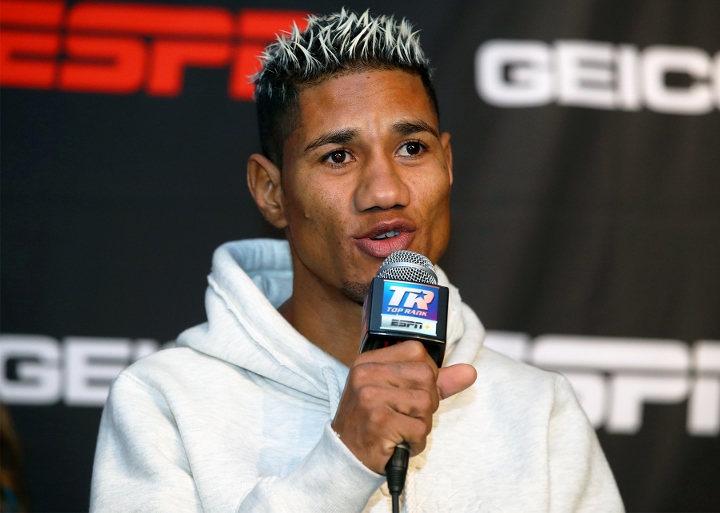 The bout takes place this Saturday, live on ESPN+ from the MGM Grand Conference Center (“The Bubble”) in Las Vegas. Marriaga is all too familiar with the quarantined area, having camped out for a planned July clash with Philippines’ Mark John Yap. They made it all the way to the scale, where the Nevada commission was forced to cancel the fight after Yap showed up more than nine pounds over the weight limit.

Marriaga never made it to the scale for his previously planned ESPN headliner, when he was due to challenge then-unbeaten featherweight titlist Shakur Stevenson (14-0, 8KOs) this past March at Madison Square Garden’s Hulu Theater in New York City. The event was canceled two days prior to fight night due to the ongoing coronavirus pandemic.

Still, the 33-year old contender didn’t hesitate to say yes once that next call came for a new fight date. All it meant was starting all over, though not entirely from scratch.

“In between those other training camps, I found time to rest and allow my body to recover,” notes Marriaga, whose three career defeats have all come in featherweight title fights. “At the same time, we wanted to remain ready for when that next opportunity would come and I am ready to fight this weekend.”

The third shot at a first fight in 2020 comes with a silver lining. Had his bout with Yap went on as scheduled, it simply would have served as a stay-busy opportunity. Saturday’s clash with Gonzalez (23-1, 14KOs)—a fellow former title challenger—will put the winner in line for a shot at whomever prevails in a vacant title fight between Emanuel Navarrete and Ruben Villa, which takes place October 9 in this very venue.

While remaining confident of his chances of being becoming a featherweight champion, Marriaga has learned the hard way to not get too far ahead of himself. For now, he will settle for the sound of the opening bell.

“One thing I’ve learned especially this year, in boxing anything can happen,” quips Marriaga. “It’s very unpredictable. Who knows, something can happen on our way to the ring.

“All I can do is be ready to fight, which I am and I’m looking forward to finally getting in the ring this weekend.”