Mariana Juarez vs. Jackie Nava Finalized For May 9

A fight has been finalized between two of biggest names in the history of female boxing in Mexico.

WBC bantamweight champion Mariana “La Barbie” Juarez will defend the belt against Jackie “Princesa Azteca” Nava have agreed to fight on May 9th. The contest will be televised by TV Azteca in Mexico.

In addition to Mariana`s belt being at stake, this will also be for the Diamond championship. 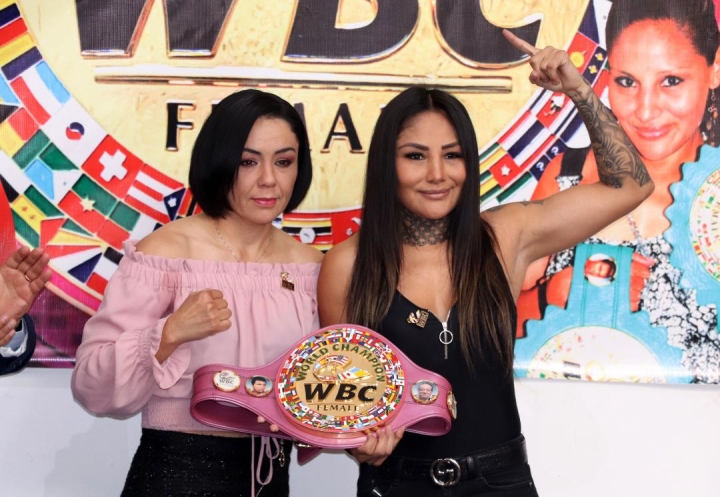 The announcement of this extraordinary still in time championship clash, was made by World Boxing Council President Mauricio Sulaiman at a Special Women`s Day event at the Gimnasio Coyocan in Mexico City.

The two boxers were flanked by the Mayor of Coyoacan Manuel Negrete, the scorer of the most spectacular goal in the history of the all World Cups, plus the representatives of Promociones Del Pueblo and Zanfer Promotions.

Mariana and Jackie who happen to be great friends, posed for photos side by side, then an eyeball to eyeball, chin to chin stare down, followed by a long heartfelt hug, with each wishing the other the best of luck and success, in the magnificent sporting tradition of women`s boxing.

This will be a got damn war for the ages! Hopefully DAZN or ESPN picks it up! Women’s boxing has become better than its ever been, if they could get better pay then its almost guaranteed that we will get…

The female fight I was waiting for ages. Good luck for both Mariana Juarez and Jackie Nava. I like both inside and outside the ring. Both have lovely hearts.:beerchug: