The eight division champion has been inactive since July of 2019, when he captured the WBA title with a twelve round decision over unbeaten Keith Thurman at the MGM Grand in Las Vegas.

As BoxingScene.com previously reported, the boxer is not going to fight in 2020 - due to the restrictions with the coronavirus pandemic. 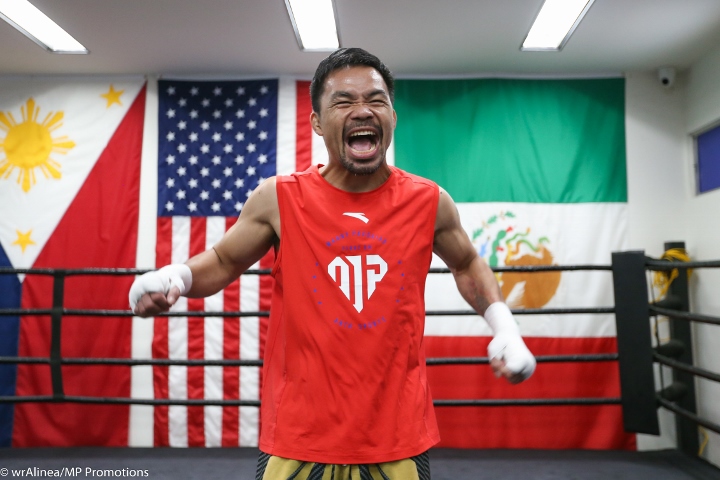 In the last few months, Pacquiao has been rumored as an opponent for several big names - including Errol Spence, Mikey Garcia, and even UFC superstar Conor McGregor.

Sean Gibbons, the head of Pacquiao’s MP Promotions, indicates that whoever the boxer faces - he won't be coming back on the cheap, so a live crowd will likely be necessary in some form.

“Logic would tell you that with the kind of money the senator is going to command for any fight he takes, there would have to be some fans in the stands,” Gibbons told Yahoo Sports. “It’s the same with [Deontay] Wilder and [Tyson] Fury and Anthony Joshua. You need crowds to generate the kind of money it takes to put on an event like that.

“The Senator is long past the point of having to prove anything. He’s in his 26th year and with what he’s done, it’s enough to get him in the Hall of Fame 10 times over. He wants to give the fans what they want.

“Let’s be honest, here: At this stage, there is nothing he could do to top what he’s already done. What does it mean to him now to beat the best welterweights out there? Been there, done that. At this point, Manny is on a sort of a victory lap, and he’ll let the fans speak and then make a decision.”

I am more interested in who he is fighting next? Is it McGregor or Mikey? I am am confused because there appear to be conflicting reports about his next opponent.

[QUOTE=LoadedWraps;20787470][COLOR="Navy"]That's an excellent idea. As a combat vet myself, I think it would be a big success. I was lucky enough to have a heavy bag in Iraq and I know many dudes put time in on Fight Night daily.[/COLOR][/QUOTE]…

[QUOTE=Boxfan83;20786716]They should have it on a U.S. Military base overseas. Have all the service members that buy a ticket tested then show it for free on AFN. Some of these military guys make some good money overseas and don't have…

[QUOTE=thedarkdragon11;20786302]Comparing the popularity of Fury, Wilder and AJ to GrandPac's? Seriously?[/QUOTE] [COLOR="Green"] Fury is the face of boxing. The cash cow. The golden goose.[/COLOR]