Manny Pacquiao just knew that he was done with boxing. It was in the back of his mind heading into his rubber match with Timothy Bradley Jr. this past April, pushing to the forefront following his throwback performance in dominating his longtime ring rival and capturing the vacant World (lineal) welterweight championship.

The feat pushed him ahead of prior conqueror Floyd Mayweather in capturing more lineal championships (five) than any other prizefighter in boxing history. It should have been a fitting way to cap a Hall of Fame-bound career as he ventured into the home stretch of a Senatorial bid in his native Philippines, claiming office following an election victory this past May after having served two terms as Congressman in the Philippine province of Sarangati.

Anyone who’s paid even a modicum of attention to Pacquiao’s career over at least the past 15 years, though, will know that his life is nothing without chaos. Even with the rigorous duties that come with serving office, the most famous athlete to ever come from the Philippines felt a void in his life, even if just a few months removed from the sport that brought him fame and fortune.

That is why – barely a bat of an eyelash into his suggested retirement – the iconic southpaw has decided to give boxing one more try. Less than two months ahead of his 38th birthday, Pacquiao (58-6-2, 38KOs) takes on reigning welterweight titlist Jessie Vargas, looking to become a four-time welterweight titlist in their Top Rank Pay-Per-View headliner at Thomas & Mack Center in Las Vegas, Nevada.

“I felt very good in that Bradley fight.  It is not the reason I continued to fight though,” Pacquiao explained to an intimate-sized group of reporters during a VIP media conference call to discuss the event and his comeback. “I came back because I felt lonely, not training with my friends and I felt empty and I realized that I could still train and work so that’s why I decided to fight again.”

It remains to be seen whether his return comes right on time or simply adds to what has been a miserable year for the stateside boxing scene. The sport was believed to have lost its two biggest superstars in a span of seven months, with Pacquiao’s announced retirement coming on the heels of Mayweather’s declaration that the gloves were permanently off following his 12-round win over Andre Berto last September.

For Mayweather, the move made sense and in fact came one fight too late considering his career-defining win over Pacquiao. Not only did he cruise to victory in the most lucrative boxing event in history, but also walked away from the May ’15 night some $250 million richer.

As for Pacquiao, there remained – and perhaps remains – unfinished business. The dominant showing in his third fight with Bradley appeared to be enough, looking much sharper than he did in a win over the Californian in their April ’14 rematch as well as his highly questionable split decision verdict in their June ’12 meet, which marked his first loss in more than seven years.

Perhaps it speaks to the sad state of where boxing is today that the biggest fight to be made is a Mayweather-Pacquiao rematch. Hall of Fame promoter Bob Arum hasn’t stopped teasing the possibility from the moment their dull 12-round affair ended last May, as he remains in the camp of many whom remain of the belief that Mayweather – currently at 49-0 – will want to come back to at least claim win number fifty.

That’s not what drives Pacquiao, though. In fact, he doesn’t even know if there will be any more fight in him after November 5. For now, it’s about filling an immediate void in his life.

“I don’t know yet,” Pacquiao says of the possibility of doubling as a Senator and prizefighter in 2017. “One fight at a time.  I take them one at a time.  I cannot say yes right now.  First I think about this fight.

“Today, Jessie Vargas is the most important fight of my career.” 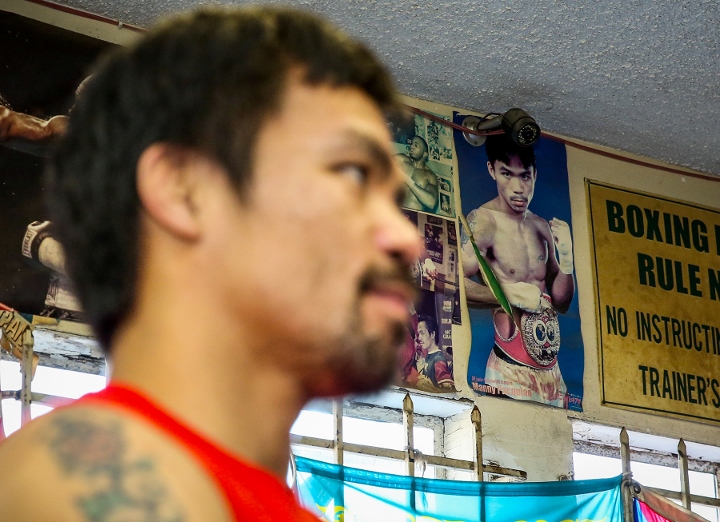 A win will also add yet another benchmark to a career filled with historical feats. In addition to his lineal championship mark, the iconic Filipino southpaw’s feat of capturing titles of any kind (lineal and/or alphabet) in more weight divisions (eight) than any boxer in history is a mark that won’t be matched or surpassed any time soon, if even in his lifetime.

Should he get past Vargas – a two-division titlist more than 10 years his junior – it will mark the first time ever that an active Senator will have claimed a major title. He remains a heavy betting favorite to pull off the feat, but by no means has coasted in preparation.

“He has been very aggressive in his sparring – throwing combinations and he seems to be getting back to the old Manny – really quick combinations, in and out, flurries and very hard punching.  He has been hurting me while on the mitts,” insists Hall-of-Fame trainer Freddie Roach, who has been Pacquiao’s head coach since 2001. “My shoulder is a little messed up. Buboy’s hand and shoulders are messed up. We’ll hang in there … but holding the mitts for Manny is not the most fun thing in the world to do – it’s hard, hard work.

“If he carries that over into the fight I think he will knock somebody out. He hasn’t knocked out any 147-pounders (since Miguel Cotto in 2009), but… they are much bigger guys and they can take better shots, but I feel that with the combinations and the way he has been training he has been very close to knocking guys out in the gym and so forth. I am very impressed with him in the gym workouts so far.”

Vargas (27-1, 10KOs) has touched the canvas just once in his career – recovering from a body-shot knockdown to outpoint Wale Omotoso in their March ’13 battle of unbeaten welterweights. The lone loss of his career came in a 12-round unanimous decision to Bradley, a bout where he was outboxed but never seriously hurt and in fact had his eventual conqueror in a heap of trouble near fight’s end.

The power surge carried over into his next fight, a 9th round knockout of Sadam Ali this past March to claim a vacant welterweight title. Once again, Vargas didn’t show any signs of ever being on the verge of dropped or stopped, and at the very least poses a threat to take Pacquiao some rounds in what will be the first defense of his title.

For Pacquiao, delivering a knockout ending is less important than giving his adoring public the best possible performance in the sport he loves too much to keep in the rearview mirror.

“When I moved up into the higher weight divisions it changed my preparation – I eat a lot to make 147,” explains Pacquiao, whose career began nearly 22 years ago as a strawweight and whose first championship reign came at flyweight. “Where I may gain a pound of two between the weigh-in and the fight, my opponent may be a lot heavier. I am not saying that I cannot do that, but what I am trying to do in every fight I try to do my best.

“It just so happens that my opponent is tough and bigger than me.  But I am still trying to do my best to get a knockout in the fight. I am not saying what I am predicting for this fight but if the knockout comes, it will come – it is the bonus for all of your sacrifices in training. (Vargas) is bigger than me but that doesn’t matter – I am not disappointing the fans that I have and I did my best. I work hard in the fight and in training and I have proven that to the fans.”