Manny Pacquiao Return Being Lined Up For Crawford-Horn Card

The return of eight division world champion Manny Pacquiao (59-7-2, 38 KOs) is being lined to return to the ring as part of the April 21 card, which is going to feature Terence Crawford challenging Jeff Horn for the WBO welterweight title.

Top Rank's CEO Bob Arum is looking to have the card take place on April 21 at the T-Mobile Arena in Las Vegas. ESPN would televise both fights. 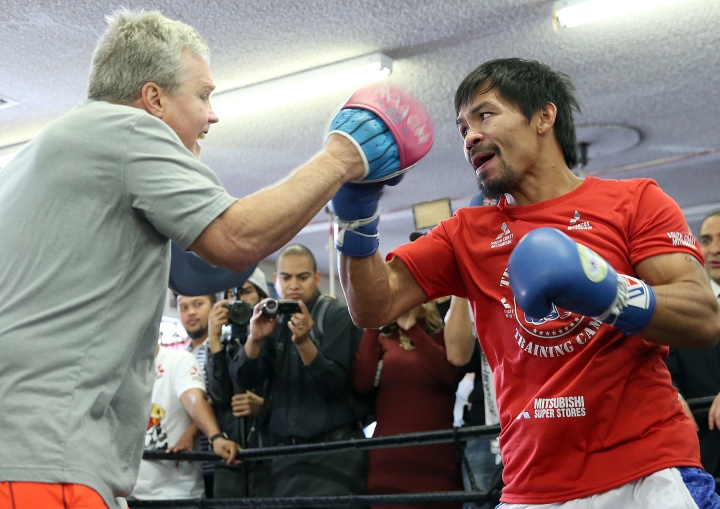 Top Rank is hoping to resolve the venue issue in the coming days.

“Unless they can get some clearance from the league, we can’t do it in Las Vegas because none of the other arenas are available and we would have to do it somewhere else,” Arum said to the Las Vegas Review Journal.

If they are unable to work out the particulars, the event could head to Madison Square Garden in New York City on April 14.

The fight would be Pacquiao's first appearance since losing his WBO world title in a big upset decision to Horn last July, before 51,000 at the Suncorp Stadium in Brisbane, Australia.

It's no secret that Pacquiao, 39 years old, would be the fall opponent for the Crawford vs. Horn winner.

The big question right now, and Arum has yet to work this out, is whether the main event will be Pacquiao or Crawford vs. Horn.

“We’re working on an opponent,” Arum said to the paper. “Don’t want to be too premature about that, but we’re working on it as we speak. Pacquiao seems like he wants to come back, so we’re trying to get that finalized.

“ESPN has a way to solve (the main event issue), so it will be very interesting when we announce it.”