Manny Pacquiao: I Don't Think Keith Thurman Will Trade With Me

LAS VEGAS – Manny Pacquiao smiled wide when he was informed Keith Thurman promised to trade with him Saturday night.

“That’s good because I’m small,” a laughing Pacquiao told a group of reporters at MGM Grand. “He’s big, so it’s good for him.”

When asked whether he believes Thurman, the Filipino icon laughed again and said, “I don’t think so.” 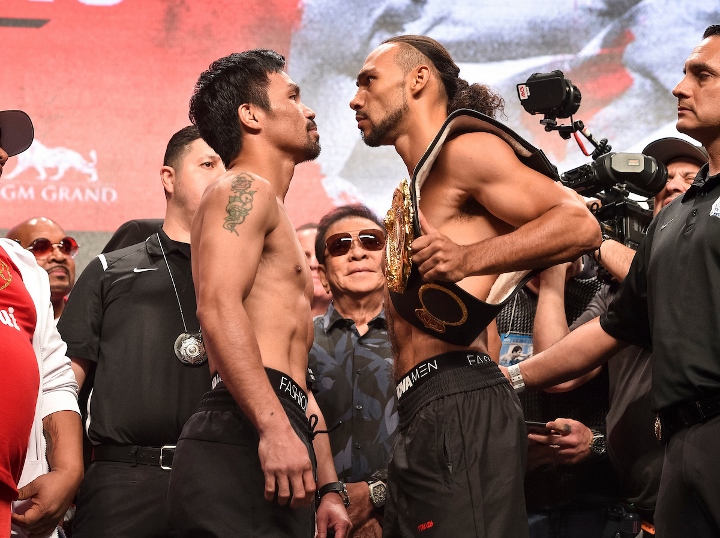 The prevailing feeling is that that the younger, athletic Thurman will try to move and box his way to a victory over his 40-year-old opponent. That’s the most methodical manner in which to deal with Pacquiao’s persistent pressure, but Thurman has said throughout this promotion that he wants to “destroy” Pacquiao, not just knock him out.

The 30-year-old Thurman also wants to deliver a memorable performance in his first pay-per-view main event. That’ll require Thurman to stand and fight with the powerful southpaw more often than not.

“If he gets me down, he better have me out because I’m coming,” Thurman said. “I wanna trade with Pacquiao. Because like [late trainer] Ben Getty used to tell me, ever since I was 13, 14 years old, ‘I don’t care who it is, boy! You hit him with eight-ounce gloves, oh, they gonna do a pretty, little dance.’ Manny Pacquiao’s no different.”

Following a one-year layoff after his upset loss to Jeff Horn in July 2017, the Philippines’ Pacquiao has looked good in each of his past two fights.

He knocked down Argentina’s Lucas Matthysse (39-5, 36 KOs, 1 NC) three times on his way to a seventh-round technical knockout a year ago in Kuala Lumpur, Malaysia. Then Pacquiao soundly defeated Adrien Broner (33-4-1, 24 KOs, 1 NC) by unanimous decision in their 12-rounder January 19 at MGM Grand Garden Arena, the same venue where Pacquiao and Thurman will fight.

Thurman reminded Pacquiao and everyone else that he’s not Broner or Matthysse.

[QUOTE=Redd Foxx;19917288]Manny HAS TO apply his power early because Keith behavior is highly affected when he gets hit. He even ran from Guerrero after getting hit hard. Judges always give the younger, bigger guy the rounds. Manny can't afford to…

[QUOTE=Redd Foxx;19917288]Manny HAS TO apply his power early because Keith behavior is highly affected when he gets hit. He even ran from Guerrero after getting hit hard. Judges always give the younger, bigger guy the rounds. Manny can't afford to…

If Thurman comes with full determination, uses his height and reach properly then its easy night for him either by KO or decision. Pac cant comeback 10 yrs ago...

Thurmos will do anything BUT trade with Pac. He'll be on his bike for however long this one lasts. I do think like others have suggested, that Pac will jolt Thurmos a few times, see what he's made of. And…