Manny Pacquiao Gets Vicious in Sparring, Works Over Ramirez

Senator Manny Pacquiao, the eight division world champion looked devastating in sparring against unbeaten Jose Ramirez at the Flash Elorde Gymnasium in the Mall of Asia complex on Thursday.

Pacquiao told BoxingScene.com/The Manila Standard that he is “inspired and always dedicated to my work. You know how I train. I work hard and it’s the only way I can  make boxing easier.”

Pacquiao who was furious over six rounds cracked Ramirez with vicious uppercuts and combinations and plans to increase his heavy sparring to 10 to 12 rounds as he approaches the November 5 showdown against Jessie Vargas, Manny told us “the passion and the fire is still there and I’m excited to do my job.” 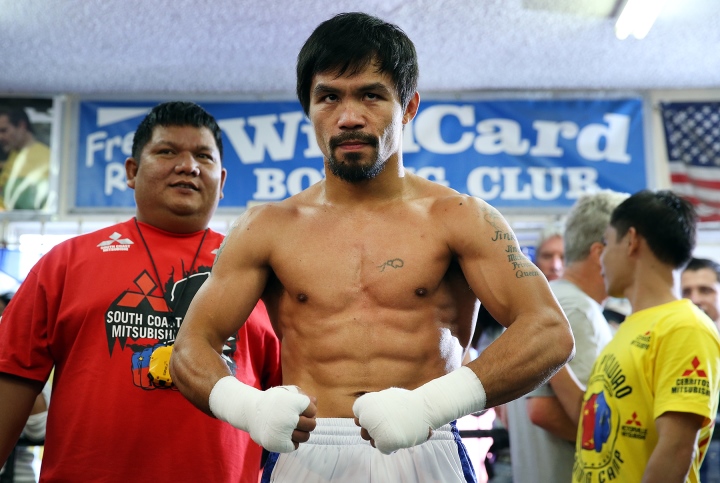 He added he was excited to do his job and claimed that Vargas’ commitment to score an 8th round knockout would be “impossible to do because God is with us.”

Strength and conditioning coach Justin Fortune told us that Pacquiao, who sparred six rounds against Ramirez, was “at his best. He was sharp and his timing was great and was determined to put on a great show.”

Fortune maintained that Vargas “will fight and won’t run. That’s the good thing about Vargas but Manny is stronger and faster” .

Former two division world champion Gerry Penalosa said “there is no way Vargas can last ten rounds” even as he said Vargas contention that he will win by a knockout in eight rounds was to “keep on dreaming .”

The fight is Pacquiao's first since announcing his retirement back in April, when he won a twelve round unanimous decision over Timothy Bradley in their trilogy bout at the MGM Grand in Las Vegas. The following month, Pacquiao won a senatorial seat in the Philippines. It wasn't long before he was itching to get back in the ring and announced his was eager to continue his career for a few more fights.

Both doing random testing for this fight? If not, Manny wins easily.

[QUOTE=Isaac Clarke;17124906]It was called that by casuals that don't watch boxing. Looks like you're one of them.[/QUOTE] Says the Mayweather fan.

I think we may just see a vintage-esque KO performance from Pac here. Vargas is made for him IMO.

[QUOTE=Isaac Clarke;17124906]It was called that by casuals that don't watch boxing. Looks like you're one of them.[/QUOTE] keep juggling his balls. thats what fanboys do.

[QUOTE=WesternChamp;17124900]the fight wasnt called the hug of the century for no reason. [/QUOTE] It was called that by casuals that don't watch boxing. Looks like you're one of them.