Manny Pacquiao was not going to stay retired after his April 9 win over Timothy Bradley. Not when there are potential fights against the likes of Terence Crawford or Floyd Mayweather.

How convenient was it for both to be sitting ringside amongst the 16,132 in attendance at the Thomas & Mack Center in Las Vegas.

What were both thinking as they exited the venue after Manny Pacquiao won a unanimous decision over Jessie Vargas remains to be seen.

But they both know Pacquiao brings a lot of money and large continent of fans to fill any arena to the table.

If Saturday night was a showcase of sorts, Pacquiao did what he had to do and what was expected of him: dominate a fighter in Vargas throughout 12 rounds.

Lost in all this was Vargas, who would lose the WBO World welterweight title to Pacquiao. But he tried and made the popular Filipino fighter earn the victory.

Vargas was defending the title he won on March 5, when he stopped Sadam Ali in Washington, D.C. It was an impressive win for the Mexican-American, but it made him a likely target for Pacquiao and his handlers.

Would Vargas realistically land a fight against Pacquiao if he did not have a world title belt? Most like not, but Vargas was up to the challenge, even after a proposed fight with Kell Brook evaporated over the summer.

Vargas said all the right things in the build-up to the fight, but from the opening bell, looked overwhelmed by Pacquiao's speed, albeit it was not what it once was. 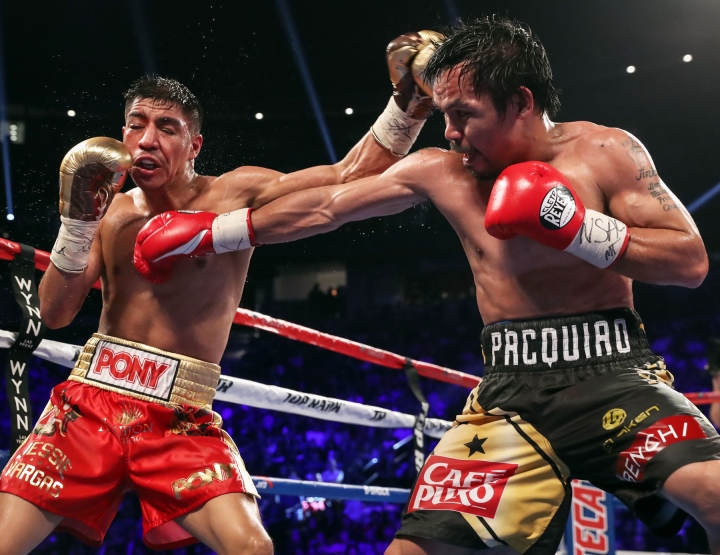 Pacquiao used his speed to drop Vargas with about a minute left in round two, courtesy of a left hand to the head. Vargas was not visibly hurt, looking more embarrassed that the punch dropped him on his rear.

Pacquiao continued to be in control, but Vargas did his best work in the middle rounds, finding a home for straight right hands to the head. Some of those punches snapped Pacquiao's head back, especially during rounds six, Vargas' best round.

But, like the consummate pro that he is, Pacquiao was able to weather the storm, utilizing his speed and aggression to swing momentum back in his favor.

As if Pacquiao's speed was not enough to deal with, Vargas had to deal with a cut over his right eye that was caused by a head-butt, although the Nevada State Athletic Commission ruled that a punch opened the cut.

Pacquiao walked Vargas down at times, controlling the action as the fight moved into the championship rounds. Vargas did all he could, but Pacquiao's pedigree was too much on this night.

Pacquiao had to have 12 stitches for a cut over his right eye and did not attend the post-fight press conference.

Now that Pacquiao holds a title (and another eight figure purse to boot), what is next?

Rumors amongst boxing insiders is that a possible rematch between Pacquiao and Floyd Mayweather could be penciled in May. Many in boxing cringe at the idea of another fight that would produce 12 anti-climatic rounds at a steep price.

Then there is the possibility of Terence Crawford, a fighter who has mentioned he is staying put at 140 pounds until he unifies all the world titles.

Since Bob Arum is now doing business with Al Haymon, there are also possibilities of Pacquiao fighting other elite welterweights like Danny Garcia and Keith Thurman. Both are scheduled to fight each other in March.

"I'll let the fans pick who they want me to pick," said Pacquiao after the fight. "I don't pick anyone."

When he was pressed, Pacquiao responded, "Anyone at 147 pounds."

Is a potential fight with Crawford a possibility.

"Yes, I don't have any problems going down to 140 pounds. It would be better for me."

As for Vargas, the loss to Pacquiao does not hurt him. He is still a player at 147 pounds and would likely fight on HBO programming in 2017.

"We'll come back strong for my next fight," said Vargas afterwards. "We're still young. Fighting a legend in Manny Pacquiao will elevate my game."

Valdez was the aggressor throughout the fight, never letting Osawa establish anything consistent on offense.

Midway through round four, Valdez landed a lead left hook to the head, dropping Osawa to the canvas. To his credit, Osawa was able to weather the storm and fought back.

Valdez ended matters in round seven, hurting Osawa with a right hand to the head. Osawa staggered back into the ropes where Valdez followed up with a barrage of punches. Osawa was unable to defend himself, prompting referee Vic Drakulich to stop the bout at 1:50.

The 25-year-old Valdez has stopped his last five opponents.

What was expected as a highly competitive, all-action fight between the two did not materialize early on as the first half of the fight was most tactical. Donaire walked Magdaleno down, while Magdaleno looked to counter.

An accidental clash of heads opened a cut over Magdaleno's left eye, but Magdaleno's corner was able to stop the blood from flowing out profusely.

As the bout progressed into the middle rounds, Magdaleno began to let his hands go more. He was able to beat Donaire to the punch, even hurt Donaire with a right hook to the head in round nine.

Sensing he was down, Donaire went on the attack in the final two rounds. He was able to land straight right hands to the head of Magdaleno. Donaire looked as though he stunned Magdaleno in the final minute of round 12, but was unable to follow up to drop the Mexican-American fighter.

In the opening bout of the Top Rank pay-per-view broadcast, Zou Shiming cruised his way to a one-sided decision over Prasitsak Phaprom.

The fight was a rematch of their 2014 clash, one where Shiming also easily defeated the Thai fighter.

It was all Shiming from the opening bell, as he rained down punches and combinations to the head of the shorter Phaprom. Shiming dropped Phaprom with a right hand in the second round in route to a decision win.

Francisco A. Salazar has written for Boxingscene.com since September of 2012 and has covered boing in Southern California and abroad since 2000. Francisco also covers boxing for the Ventura County (Calif.) Star newspaper, RingTV, and Knockout Nation. He can be reached by email at santio89@yahoo.com or on Twitter at FSalazarBoxing